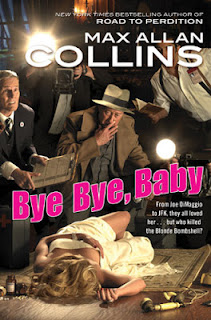 The placement of Nathan Heller in a firmly historical context, dealing with various historical incidents, interacting with a host of famous, infamous, well-known and not-so-well-known figures was best handled in that opening sequence, at least from my perspective, if only because I learned most of what I know about that period of Chicago history through these books. Sure, I had vague knowledge of the major figures – Capone, Dillinger, even Frank Nitti (although I'll always remember my first real exposure to that character being made memorable for me when a good friend who grew up in 1930s-40s Chicago scoffed at his portrayal in the film version of The Untouchables when we watched it together) and so forth – but no more than that. For some, at least, of the historical events and mysteries around which the subsequent eleven novels over the next 25 or so years (the opening trilogy initially appeared in 1983-1986 although I wouldn't discover them until long afterward), I had at least somewhat more knowledge going in, or the setting overall was at least getting closer to the period of my own lifetime, although even in this latest novel we're not quite into the period of my living memory. And, to be sure, Heller's intimate involvement in so many high-profile cases (and with so many famous and beautiful women) becomes increasingly ridiculous (a character provides a rather amusing commentary on that herein: “You are a resourceful investigator, Mr Heller. You have been involved in an improbable number of important, even famous investigations – the Lindbergh kidnapping, the Huey Long assassination, the Black Dahlia murder” – p. 282) – but that's just a conceit necessary for the series that just has to be accepted. With that requisite suspension of disbelief, continuing with the series beyond that opening trilogy will afford the reader many hours of enjoyment across the middle years of the 20th century, from the early 1930s all the way to this current book's 1962. Going simply from memory here, I think this book has the latest setting of any of the Nathan Heller tales (after the first four novels, writing/publication order does not follow the series' internal chronology). And, no matter how much knowledge one might have of any of the real-life cases upon which Collins builds his stories, they will likely learn more from the sheer depth of research that Collins pours onto his pages. As an aid to distinguishing between fact and fiction, each book (I believe – if not, most) concludes with a fairly lengthy essay invariably entitled “I Owe Them One,” and beginning with the following or similar words:

“Despite its extensive basis in history, this is a work of fiction, and liberties have been taken with the facts, though as few as possible – and any blame for historical inaccuracies is my own, mitigated by the limitations of conflicting source material.

“Most of the characters in this novel are real and appear under their true names, although all depictions herein must be viewed as fictionalized. Available research on the various individuals ranges from voluminous to scant. … Quotes from these real people are mixed with invented dialogue, the latter underpinned by research.

“Nathan Heller is, of course, a fictional creation. A few characters … are composites or are otherwise so heavily fictionalized that I have not used real names. ...” (p. 327).

… and Collins proceeds to detail the key figures, his bases for their activities, the sources upon which he and his researchers drew, his reasoning for whatever solution he has ultimately proposed to whatever mystery he has thrown Heller into most lately, and so forth. A reader wanting to follow up with more intensive research of their own is provided with an excellent launch pad. At the very least, Collins makes sure that the line between fact and fiction is a little less blurry than it would be without the afterword.

In all, this series is probably my current third favorite, being edged out only by Jim Butcher's Dresden Files and David Weber's Honor Harrington/Honorverse stories. I eagerly await each new offering. Which doesn't necessarily mean I jump right on it when it comes out (well, that's why I would place Dresden first, because in that case, I do!), but it definitely goes into my lengthy and ever-growing queue of things to be read, always toward the top.

As might be surmised by the more insightful reader based on the title, Bye Bye, Baby tackles the still-controversial case of Marilyn Monroe – officially still listed as a suicide, although almost certainly a homicide. For his part, Collins expresses no doubt: “My longtime research associate George Hagenauer helped sort through the material and select what to read (and what not to), and spent several days at my home … discussing and exploring the ins and outs of what we are both convinced is the murder of Marilyn Monroe” (p. 328). Ultimately, in the pages of the story itself, Collins provides a credibly fictionalized version of the murder, while making the point that really any of a plethora of plausible suspects could have performed the deed – which was made all but inevitable in the conjunction of personal and professional difficulties in which Monroe found herself in the context of the political and personal shenanigans of JFK and RFK against a backdrop of early-1960s Cold War tensions. And this is just the first of a total of three Heller novels that Collins plans involving the Kennedy brothers (the second is Target Lancer, which is recently out and, yes, in the queue).

I must say something about Collins' portrayal of Monroe herself. Here she comes across as anything but the “dumb blonde” which many then and now considered her, verging on over-the-hill in 1962 with a career in shambles, a love-life even more so, destroyed by the Hollywood lifestyle of sex and drugs, who may well have not become the icon that she did had she lived on and not met her untimely end. Not having actually lived through the period of her living fame, I obviously can't say for sure, but my impression is that for all her idolization during the 1950s-early 1960s, the cult of Marilyn Monroe was really born on 5 August 1962. An archetypal case of “die young and stay pretty,” to quote a catchy song expressing a horrible philosophy. To be sure, Collins' Monroe had her demons, many of her own making, but in this version of the story she is dealing with them very capably and intelligently, although ultimately she was deemed too dangerous to live – or rather, the circumstances of her death must be managed and controlled. I dare say any red-blooded all-American male shares to one degree or another in Collins' fascination with her, just based on the wonderful, sunshiney persona that comes through every image I've ever seen of her, whether still or film, but Collins' Marilyn is a truly likable – not just desirable – woman. And yes, fifty-some-odd-year-old Nathan Heller continues his streak of home runs in this book, living out every man's fantasy of making love to Marilyn Monroe.

To which I can only say ... Cheers! – and Thanks for reading!