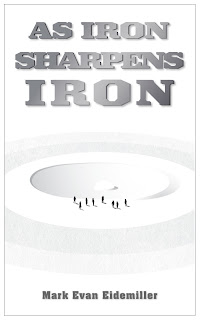 This is the first of several “quickies” to get me caught up. Last week was mid term with grades due at midnight Sunday. Since one of my courses is online and I give the students until midnight Saturday to finish up the first half of the semester's work, I spent all day and evening Sunday reading exams and processing grades. Saturday had been eaten up by our annual regional Social Studies Fair. Then, “A Term” grades – half-semester courses – were due on Tuesday evening; I taught one of those online for the first half of this spring as well, so that was Monday and Tuesday's task. Grading must be hard work!, because by Tuesday evening my shoulder was hurting and Wednesday my rotator cuff was killing me. Seriously, I wish I knew what I did to inflame it – I think it was an old karate injury just flaring up – because I sure wouldn't do it again. Anyway, I know that's all of less interest to you than what I've been reading and watching … at least I think that's the case.

As Iron Sharpens Iron is Eidemiller's first commercially published novel. I put off reading it until I had completed his fan-fiction Bronze Saga as far as he's written it so far. I initially learned about Iron the same way I learned about the Bronze Saga, through his appearance last spring on the Book Cave podcast, and if you want to get some background on this story, meant to open another series entitled The Irons Alliance, that would be your best bet.

Going directly into it only a short time after reading Bronze Saga #9, Bronze Golem, was not the best reading strategy, I now realize. I had a real sense of déjà vu because Eidemiller uses a lot of the same tropes in the framing sequence of Iron as had been developed over nine stories in the Bronze Saga. The effect of feeling that it's just retread was only heightened by Eidemiller's use of the same name for his viewpoint character, Perry Liston. As my old drunken mentor used to say in very different contexts, “they are not the same, but the similarities far outweigh the differences.” Luckily, it turns out that the beginning of Iron is just a framing sequence, and the heart of the story takes place sixty years in the past. That story – the origin of the Irons Alliance – I found to be far more engaging than what I felt to be a sideways reflection of Doc Savage's latter-day band of high-tech paramilitary adventurers without the Man of Bronze himself.

Briefly, the heart of this book tells of how a group of Christians from very different walks of life – along with a character who is not a Christian but rather an old-style pulp hero, a bloody avenger who has a lot in common with Marvel Comics' Punisher – are drawn together by a dream they have in common into an expedition to the Arctic, where they discover a golden meteor that imbues them with longevity and heightened abilities. Along the way “Punisher” is saved, of course. All this happens just in time for a monstrous mutated lizard creature – the archetype of Godzilla – to emerge from nuked Japan and attack the United States. Using their various talents and abilities, the group saves the day, the experience forging them into a team who will obviously stay together through the coming decades and adventures what are only alluded to in the framing sequence, adventures which should provide Eidemiller with plenty of subject matter for subsequent stories.

The Irons Alliance came together about 1950. By that time their world was already somewhat different from our own. Just a couple of the most apparent divergences were that Tokyo was one of the Japanese cities nuked by the United States at the end of World War II and that Amelia Earhart shows up late in the book as an integral character. It's also pretty apparent from the framing sequence and the hints that are dropped there that subsequent history ends up being quite different from our own world. Exploring those differences along with Eidemiller will be part of the fun of continuing this series.

Once I got past the stumbling block of the opening as described above, I enjoyed this story much as I've enjoyed the “Christian Adventures of Doc Savage.” It has most of the same strengths as well as the same weaknesses. The latter would be the somewhat overbearing evangelical tone that pervades the story, which I can see being quite off-putting to a reader coming upon it unawares. I was “awares” so it didn't bother me, in fact as I've said before I'm very much in agreement with the basic Christian world view expressed herein, and I don't want to dwell on that any more than I do when blogging about the Bronze Saga, but a bit more subtlety may serve Eidemiller well in seeking a wider readership. That would be my little bit of unsolicited advice. Otherwise, as always, I find Eidemiller a very compelling writer, and I do look forward to reading more about these characters.

N.B.: I just went to Eidemiller's web page and see that Bronze Saga #10: Bronze Shaped as Clay, is now listed with a tentative release date of this month … and is indeed billed as “The final chapter in the Bronze Saga.” That will be hard to read and write about....
Posted by Kent G. Hare at 13:29