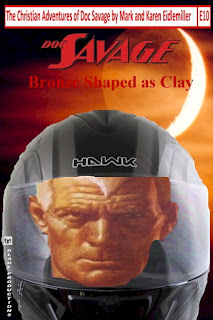 In this the tenth and ostensibly final installment of the Bronze Saga, a.k.a. the “Christian Adventures of Doc Savage,” Mark Eidemiller works with characters whom he as come to know intimately well. Not just Doc Savage and his extended group of companions that has steadily grown over the past decade and more, including Eidemiller's usual p.o.v. character Perry Liston, but to a degree far beyond his cameos in past volumes, he himself, Mark Eidemiller of Portland, Oregon, plays a critical role in the story and shares in the life-changing events with which it culminates. Eidemiller plainly indulges in a great deal of wish fulfillment as he dons what Grant Morrison dubbed his “fiction suit” (see here) – over which he gets to put on a flight suit as well – and soars like a hawk into battle alongside Doc Savage himself in the climactic confrontation with a villain literally out of a James Bond novel.

And I do mean that literally. I'm not sure why, in this shamelessly unauthorised volume in a series of fan-fiction that has throughout its run used numerous copyrighted characters sans permission, Eidemiller chose to thinly veil the identities of these particular characters, but I don't think I really depended on my Ph.D. to know exactly who “John Fleming” and his acquaintances were from the first moment they appeared. And when “Fleming” was referred to as “Agent Oh-Fourteen” I had to groan. (Actually, “Fleming's” bride who was killed years before mere hours after their wedding, revenge for which drives him for much of the story, did retain her original name, I believe, but none others.) In any case I mentally read “Bond” (and visualized an elderly Sean Connery, albeit beardless) whenever I saw “Fleming” throughout.

The gists of the converging plots are these: Mark Eidemiller has received divine inspiration that it is of crucial importance that he be aboard the Clark Savage Institute's “helicarrier” ('cause that's what I'll always think of it as) at some point in the near future. Meanwhile, the most bitter arch-enemy from “Fleming's” buried past returns, having discovered a means to utilize nanotechnology to induce either rejuvenation or rapid aging. He uses the former to return “Fleming” to the prime of life – but only to destroy him by framing him for a heinous crime for which the best he could hope would be a long second lifetime in prison. The latter he means to use to blackmail the world's richest countries or see the populations of their most important cities die of old age within a matter of hours. (Okay – unlike my question regarding the seemingly unnecessary changing of the name of fictional characters folded into this story, it's perfectly understandable why Miley “Hannah Montana” Cyrus' name was changed when, right off the bat, she becomes the first victim of what the world dubs the “Dorian Gray Virus.”) The stories come together when, on a vacation in the Bahamas, Perry Liston and his wife Dot, along with Mitch Drake and his lover, lounge singer Jill Woodward, are drawn into “Fleming's” plight when one of Jill's backup singers becomes an innocent victim in the villain's plot against him.

As hinted in that quick overview of the setup, Doc Savage himself is less a central character than usual, rather taking a bit of a back seat for a good bit of the story to Perry and Mark, as well as to “Fleming.” Doc is definitely there, but he's still having a difficult time adjusting to the physical limitations imposed on him by the serious injuries suffered in the previous book – and, it turns out, to the knowledge that for a second time confrontation with Wail has goaded him into acting recklessly with devastating results. But Doc does rally, in part due to spiritual counselling from Eidemiller, and plays a more central role in the later phases of the story.

I don't think it's too big a spoiler to say that, in the end, all works out, and indeed our characters are left in a much better place than they had begun after the end of the previous book. Indeed, how exactly that comes to be – the journey, so to speak – is the real fun of this story. Because Eidemiller truly is a gifted writer.

Nevertheless, when I wrote above of “life-changing events” I meant that literally as well. Not just for the Eidemillers – Mark and his wife Karen, in whose cases the “wish fulfillment” aspect I also mentioned earlier results in cures of their respective physical ailments (I wish I could avail myself of nanotech to lose a few pounds) – as well as Doc, but for the world at large although it does not know it yet. In fact, by the end of this novel, my feeling is that the world the Bronze Saga series takes place in has diverged so far from the world we inhabit that, as much as I will miss seeing the further adventures of these characters, I believe that Eidemiller is making a wise decision to put it behind him and concentrate on his other series, The Irons Alliance, which world is admittedly by the “present” considerably different from our own, but has been virtually from the beginning. For myself, at least, part of the charm of the series early on was that it seemed very much to bring Doc Savage into our own world – with a few tweaks necessary to do so – but as events and developments progressed, not least bringing more and more “fictional” characters into the stories, but even moreso the development of ever more fantastic technologies that necessarily will change the world, it is less and less “our own world.” One of Hare's Rules of History®, introduced in my first lecture in World Civ: “Technological change always has social consequences.” It's an inevitable conundrum facing any kind of “realistic” fantastic fiction that it may start in our world but will inevitably create a different world. The Bronze Saga installments have been tracking along more or less in real time (a bit of time lag, actually, but my sense is that each novel was pretty much locked into the general time when Eidemiller initially plotted the story, with the time lag constituting his writing, editing, and putlishing time. But in order to keep it ostensibly “our world” the consequences of events and technologies introduced along the way cannot realistically be followed through. In the Irons Alliance stories, on the other hand, starting in the past, Eidemiller can (presumably) work his way up to a present that we have only seen a glimpse of at this point, but which is, again, pretty different from our world – at least if that's his plan rather than set all his stories subsequent to the retrospective origin related in As Iron Sharpens Iron in the already different present world. In either case, it seems to me he has a great deal more latitude.

That's not to say that all questions raised along the way in this series are answered by the end of this “last” book. Eidemiller does leave the possibility open for future stories, should the inspiration take him. Most disappointingly for me, the mystery of Perry Liston's “magic” ring only deepens as we find out that the recently deceased Johnny Littlejohn knew more about it than he'd ever let on, and yet we – and Perry – are left with no real explanation for how Perry's namesake uncle who bequeathed it to him had come to have it in the first place, nor more importantly, what it was. I've previously speculated that perhaps a way could be devised to connect it with the One Ring, long (thought?) destroyed in the fires of Mount Doom, perhaps those fires rather simply purified it of the malevolent spirit of Sauron. Here I'll go a step further and suggest that Perry's mysterious “uncle” is in actuality his doppelganger from the Irons Alliance universe, whose story and how he came to possess the Ring and bequeath it to his “nephew” remains as yet largely untold....

I have so far refrained from dwelling on the religious aspects of this story. As with the more recent books in the series, I'm not going to dwell on it here, having said enough in earlier reviews. Suffice it to say that Eidemiller maintains the same overtly evangelical Christian tone that has pervaded the books, and if the reader accepted them hitherto there is no reason not to do so here. As I've made clear, I come at my faith from a different perspective, but that in no way interferes with my enjoyment of this series. Sure, again I find one particular conversion recounted herein – while in no way “impossible” for the ineffable Grace of God – a bit unlikely, but I do also applaud Eidemiller's realism in admitting that not every person is likely to come to such a happy ending. In particular, I know it must have been a tremendous temptation not to recount a salvation experience for “John Fleming” – bearing in mind that the door in “014's” case is left open.

All in all, I enjoyed this story immensely as a fine denouement to the Bronze Saga. Sure, I'll miss the characters, but I look forward to Eidemiller's continuation of the Irons Alliance.

Cheers!, and Thanks for reading!
***
I see that for the “faked up” cover dress for this novel, artist Dale Harris has shifted format to match that of Will Murray's newest Doc Savage novels, The Wild Adventures of Doc Savage. Nice touch, although from the particular illustration here I kept thinking that Doc would end up in space....
Posted by Kent G. Hare at 17:52