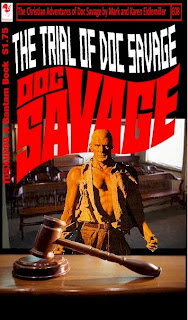 In a way, this could have served as a perfect ending for this series. Luckily, it's not – there are at least two more tales, one of which has been published, another said to be in the works. But in this story, the major unresolved issue hanging over Doc Savage from his reawakening in Bronze Refined as Silver finds resolution.

Shortly after Doc mysteriously disappeared in 1949, the activities of his “Crime College” were exposed – and were framed as gross violations of the civil rights of the criminals whom Doc had surgically rehabilitated … against their wills. Press exposés and congressional hearings destroyed his team and sullied his legacy, branding him a criminal comparable to the likes of Josef Mengele. Now, most of a decade after beginning his new life as “Clark Dent,” the birth of his children – triplets – inspires Doc to do a great deal of soul-searching, and on their first birthday he announces his intention to come clean, face the public, and the law. Not at all coincidentally, this happens just as the very criminal who had trapped Doc in suspended animation – and survived to the present by the same means – determines to finish the job of destroying Doc's reputation with the aim of driving him to utter despair and suicide. He doesn't count on either Doc's new circle of agents and friends, and the fact that Doc has found new peace and strength through Jesus Christ.

It's nice reading Eidemiller's Doc Savage again – as much as I liked #7 Bronze-Tempered Steel on its own merits, it just wasn't the same. I think it may be that Barry Ottey tried just a bit too hard to duplicate Eidemiller's style, and it came off feeling somewhat forced. There's just a natural flow in this and Eidemiller's own stories that is missing from Steel. In any case, that just-previous tale is definitively incorporated as part of the saga when we find Kal and Lois still in Doc's world, having remained long enough to help establish the journalism department at Clark Savage Institute and witness the birth of Doc's and Bonnie's children before returning to their own universe. Of course, their existence as more than fictional characters, unknown to the wider world, gives Monk the perfect opportunity to get in a slyly ironic put-down on the overly aggressive DA questioning him regarding Doc's activities in the Crime College. I guffawed right along with him at her discomfiture!

Eidemiller continues to widen the world of The Bronze Saga to encompass other figures from popular culture as well as our reality – including a very familiar head of the New York City Crime Lab, the ancestor of one of Dr. McCoy's 23rd-century associates in the Sickbay of the Enterprise, and the First Family of the United States. The elder Bush in fact knows Doc from way back. I could well have missed some such crossovers – but I don't consider the familiar name of the New York City Police Commissioner to be quite the same thing even though New York is sometimes called “Gotham” ….

All in all, this was another enjoyable read. I'm already a bit disappointed that at this point I have only one more installment in “The Christian Adventures of Doc Savage” left to read. I hope the tenth, listed as “Bronze Shaped as Clay” on the story download page linked at the top of this post, isn't too long in coming. And in the meantime, once I've read #9 Bronze Golem, there is Eidemiller's first professionally published book, As Iron Sharpens Iron, which has been sitting in my Kindle library for months now.