Reviews, commentary, general reactions, and random notes on the Dynamite Entertainment comics that were released during January (mostly) that I received near the beginning of February. Caution: Spoilers ahead! [Link to previous month.]

(See this post for something that I just realized about this series, but discussed there and will do no more than make a referral here....)

Hearing more Justice Party propaganda spewing forth from the radio, the main heroes still at Wentworth's home make plans and head out on separate missions. Richard Wentworth and Ram Singh head for Albany to investigate the governor's office. Britt Reid and Kato go to consult with a newspaperman friend of Britt's. “Spooky,” Wentworth's (?) name for the Shadow, heads out to “serv[e] justice.” Elsewhere, in hiding, Anthony Quinn discovers that he's blind. He and Rafael Vega recall previous vigilantes – the Clock and Zorro. Quinn utters the fateful words, “Blind as a bat...” Miss Fury and Green Lama fall into a trap laid by the Black Police, are taken, and discover that the many captives of the new regime are being railroaded out of the City. While Reid is fruitlessly trying to get some information out of his friend, Kato ends up in a fight, where he is joined by the Black Terror. Margo Lane and the Shadow interrogate a fat cat supporter of the Justice Party. And on the way to Albany, Wentworth and Ram Singh pass a concentration camp.

The pace is maybe picking up a bit. We're now three-eighths of the way through the series – it better. Of course, the trade-off is that the story is now a bit sketchy, but overall I think it strikes an acceptable balance. Do we really need full pages given over to recalling the Clock and Zorro each when there are only twenty pages of story in this issue? Nevertheless, I'm still liking this immensely, and can easily see myself double-dipping and getting the collection, which will hopefully come out as a hardcover.

I am a bit disappointed I didn't get Cover A (25%) by Alex Ross, however. It's thumbnailed on the inside back cover, but luckily Dynamite's collections contain full-page “virgin art” versions of all covers, so I'll get the art there … eventually.

The last few pages contain a several-page preview of a new, original to comics Dresden Files miniseries. As much as I love that series, and even though this is at least plotted by Jim Butcher himself, I'm holding off for the collection. It looks good, even if I was sceptical regarding a pistol firing underwater. Apparently it can, however.

Okay, so sometimes I can be very unobservant. It was only with my receipt of the third issue of Dynamite's neopulp comic book series Masks in my monthly shipment of comics that I noticed something that I cannot pass up expressing my outrage about, however late it might be. In fact, I'd rather work through my ire in this separate post so that when I do my monthly round-up of Dynamite Comics in a few days I can get right past it and down to the business of continuing my commentary on the story, which I am enjoying.

Nevertheless, from when I first saw the announcement of this eight-part miniseries last year and knew immediately that it was based on the great 1938 trilogy of issues of The Spider magazine containing the stories known collectively as “The Black Police Trilogy,” recently republished in a semischolarly modern collection as The Spider vs. the Empire State (see here, here, and here), I noticed that none of the promotional materials seemed to acknowledge that fact. Admittedly, I probably saw only a fraction of the various interviews that would have presumably come out, and in fact coincidentally only this morning found one, from 'way back in July 2011 when the project was first announced at San Diego Comic Con, which does show they were not keeping it secret, but as far as I could tell from casual observation over the next few months neither were they trumpeting it. In my blog post for issue #1, I commented on being gratified at least by the inclusion of a full-page ad for the Age of Aces edition. But I had not noticed a glaring omission in the dedications that come at the bottom of the credits page – p. 1 in issue #1, inside front cover in issues #2 and #3. There, after “special thanks” are extended to individuals instrumental in the new pulp movement, the series is “dedicated to” the following:

Email ThisBlogThis!Share to TwitterShare to FacebookShare to Pinterest
Labels: Comic Books, Dynamite, Masks, Norvell Page, The Spider, The Spider vs. the Empire State

Reviews, commentary, general reactions, and random notes on the DC Comics that were released during December that I received near the beginning of January. Caution: Spoilers ahead! [Link to previous month.]

Possibly the biggest DC Comics-related news from the past month is that Warner Brothers appears to have pretty much won the court case that began long ago when the Siegel and Shuster heirs tried to recapture the rights to Superman that the creators signed away to National Comics 'way back at the dawn of modern comics history, attempting to nullify a deal the heirs themselves had subsequently concluded with Warner Brothers, who now owns DC: http://online.wsj.com/article/SB10001424127887324442304578233962555228832.html. I'm no lawyer, and I have no idea if this means this long-enduring mess is now over for good – my bet would be not given the nature of litigation and the astronomical worth of the property, but maybe I'm wrong. Regardless of the tough issues surrounding creators' rights – and there are deeply-held convictions both ways – that in itself would be best, in my opinion.

Beside that, there was also news that Keith Giffen's tenure on Legion of Super-Heroes will last only two issues, which seems quite a sudden and unexpected change of course.  So much so that it's a bit worrisome.  Paul Levitz seemed to delight in the prospect of working with his old cohort again, and I thought he had more clout than that.  There's plenty of other indication that editorial at DC is in shambles ...

... None more so than the supreme bad judgment and worse taste that was just announced a few days ago that the comics coming out in April will be branded "WTF Certified":  http://www.comicbookresources.com/?page=article&id=43478.  It does not stand for "World Trade Federation," either.  That is juvenile and offensive.  I can hardly wait to explain it to my wife when she sees my comics are all "WTF Certified." 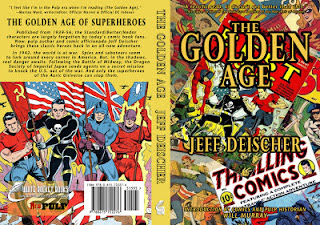 It's rather difficult for me to write this review. On the one hand, I really liked this book and definitely want to see more stories set in what Deischer calls “The Auric Universe.” On the other hand, were I not predisposed to like the idea of telling stories of a “Golden Age” universe of comic book super-heroes in the form of a neopulp prose novel, I would have to dwell on some significant problems of style, editing, and packaging that detract from the overall product. Ultimately, however, he does tell a lively story that leaves me wanting more –and leaves me with a new interest in yet another hitherto largely unknown, to me at least, stable of amazing characters who sprang up literally by the hundreds in the wake of the sensation caused by the unexpected success of Superman in 1938. (A nice touch is that it's a Superman comic book that inspires Deischer's first super-powered hero to take a costumed identity.) It's back off to the Digital Comic Museum's vast storehouse of Golden Age scans for me, and another spate of downloads! So I'm generally going to focus on the positives.

“Auric” is Deischer's name for his World War II-era world of super-heroes and -villains which caroms somewhat obliquely off of the characters originally published during that Golden Age of comics by what he generally refers to as “SBN,” a publisher that went through a succession of imprints and names. At times, they were “Standard” comics; at others, they were “Better.” Ultimately, late in the game, they went by the surname of the publisher, Ned Pines, as “Pines.” His wife's name was Dora, and for a long time comics were published under an imprint combining their names as “Nedor.” Add to that the pulp magazine imprint “Thrilling,” and the fact that some characters and titles bounced from one imprint to another and even were published in both genres, sometimes under the same name, sometimes not, and you've got one big confusing mess. The convoluted history is, I think, one reason that these characters have mostly passed into obscurity, with even their legal status somewhat mysterious. It is commonly accepted that they are now in the public domain, and as is sometimes pointed out (such as on certain character pages on the Public Domain Super Heroes wiki), even if someone today actually holds a firm copyright on one or the other, it doubtless does not include all, and the status is so murky that it's very unlikely that anyone will press their ownership. Frankly, most of these characters are so obscure that the effort would not be seen as being worth it.