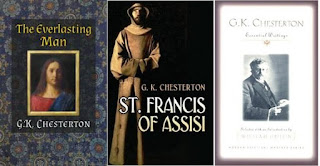 The Everlasting Man is probably the book that has languished on my Recently Read and to be Blogged list the longest … so that “Recently” has to be interpreted pretty loosely. As described in the past, I “discovered” Chesterton in early 2014, with Orthodoxy (1908) being my first bit of Lenten reading … that turned into a couple of reads over the next few months before I finally blogged about it in June [LINK]. By that time I had already described my “history” with Chesterton in a post about The Ballad of the White Horse, to which I would also refer the reader [LINK]. Thirdly, I would point to my post from March 2015 when I attended the first Louisiana Chesterton Conference [LINK] – which experience inspired me to organize the Chesterton Society of Natchitoches [LINK], which meets weekly to read and discuss his writings. In any case, almost two years ago I proceeded read The Everlasting Man twice back-to-back and was as floored by its wit and wisdom as I had been by Orthodoxy.
Read more »
Posted by Kent G. Hare at 22:30 No comments:

A Father Who Keeps His Promises: God's Covenant Love in Scripture (1998) and The Lamb’s Supper: The Mass as Heaven on Earth (1999) 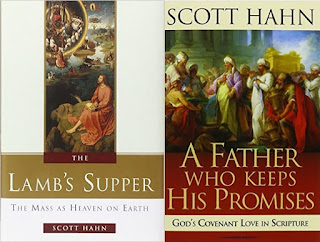 With a great deal of presumption, I have taken to calling Scott Hahn my spiritual brother, since a couple of years ago I discovered that we, both raised Protestant, were received into the Holy Roman Catholic Church on the same evening, during the Easter Vigil of 1986 – half a continent apart, of course. I’ve been aware of him as Catholic scholar and apologist supreme for a great deal of the intervening time, at least since the mid 1990s. I hadn’t actually read any of his books until the last couple of years, however. But then our parish distributed free copies of his and his wife, Kimberly’s conversion story, Rome Sweet Home: Our Journey to Catholicism (1993), which I read and blogged about as part of my Lenten reading for 2014 [LINK]. At some point subsequent to that, I acquired and listened to an audio talk based upon The Lamb’s Supper, giving more detail to the story of his conversion and how it came through intense study of the Book of Revelation, interpreting it through the lens of the Mass; the book fleshes that interpretive scheme out even further. Then, for my Lenten reading 2015 I undertook A Father Who Keeps His Promises.
Read more »
Posted by Kent G. Hare at 15:41 No comments:

The Radiance of Being: Dimensions of Cosmic Christianity (2013) 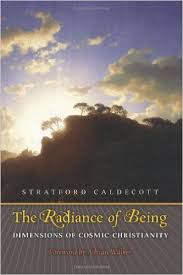 Last year, of course, I read – in backwards order – the first two books of what might be termed the late Stratford Caldecott’s “Catholic Trilogy,” The Seven Sacraments [LINK] and All Things Made New [LINK]. See especially the latter – the second review written on the book first read – for my tribute to Caldecott on the one-year anniversary of his untimely death. I remarked in the former of those reviews – on the book first written but second read – that like G. K. Chesterton, Caldecott “[made] Christianity weird in a fascinating and beautiful way.” That was written with regard to my reading of this very tome. As the previous books are extended and eclectic discourses dominated by the many well-known to obscure significances of the numbers “7” and “12” in Biblical and Christian lore, so is this latter book focused on the fundamental nature of “3.” Caldecott ranged farther and wider than merely the Judaeo-Christian tradition as well, finding fundamental echoes of the Trinitarian principle in Islam, Buddhism and other Eastern mysticisms, as well as modern cutting-edge existential quantum physics. It is a head-splitting, mind-blowing, consciousness-expanding experience that, quite frankly, months later I still find myself mulling over at the oddest times…. I’m sure at some point I will once more be telling my wife, “I’m going to read some more Stratford Caldecott and get a headache,” as I plunge into this book again.

One reason this particular review was so long in coming is that I struggled to find some approach that does it justice. I made several attempts over a couple of months, but each sputtered to a halt a couple of paragraphs in. Ultimately, I'm deciding to go decidedly minimalist, and leave my comments to those above, along with the recommendation that the trilogy which this book closes is well worth reading and meditating on. I'm not actually sure whether reading them in any particular order makes much difference, except that I do remember All Things Made New referring back to The Seven Sacraments on a couple of occasions.

Cheers, and Thanks for reading.
Posted by Kent G. Hare at 15:04 No comments: