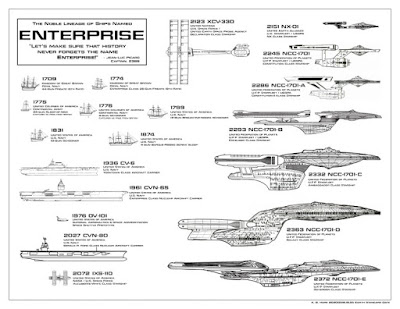 I thought about naming this post “Ring Around the Starship,” because that’s kind of where this most recent obsessio– – er, project – began….

Genesis of this Project
Around the beginning of May, while browsing the Internet I came upon this intriguing product for sale:
Sold on Etsy, by “Blue Fire Engraving,” for $35 [at the time of this writing [LINK]). I considered purchasing it but hesitated, not just because of the price for another piece of wall art my wife would probably not let me hang in the “public” parts of the house but also because I immediately perceived there to be at least one glaring omission. In Star Trek: The Motion Picture (1979), a “ships wall” is depicted as part of the recreation deck of the newly refitted U.S.S. Enterprise NCC-1701. Among a series of ships on that wall was a memorable ship which is absent from the plaque. A quick Internet search confirmed my memory via the article, “Enterprise Lineages on Display,” at the web site Ex Astris Scientia [LINK]. Five pictures depict in sequence:
Read more »
Posted by Kent G. Hare at 21:03 No comments:

Star Trek: Vanguard – and a lot of other stuff 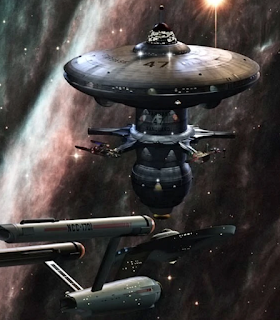 Periodically, I return to obsessions I thought I left far in my past. I have been a fan of Star Trek since soon after the original series went off the air and into syndication. Born at the end of 1961, I think I was just barely too young to get caught up in it during the original airings, which began in September 1966 and ended in June 1969. I would therefore have been four years old when it debuted and seven when it went off. Moreover, my obsession with space really began with the Apollo 11 moon landing on 20 July 1969 – ironically within weeks of Star Trek being cancelled. Just as I do remember flashes of earlier manned space missions (most clearly, Christmas Eve 1968, popping firecrackers with my older cousins outside my grandmother’s house, my uncle commenting that there were astronauts circling the moon right then – Apollo 8), so do I recall flashes of earlier Star Trek episodes on TV, but not clearly enough to know what episodes they might have been.
Read more »
Posted by Kent G. Hare at 13:34 No comments: