Comics Other Than DC – September 2013

Reviews, commentary, general reactions, and random notes on comics by publishers other than DC that were released during July (mostly) that I received near the beginning of August. Caution: Spoilers ahead! [Link to previous month] [Link to this month's DC Comics] 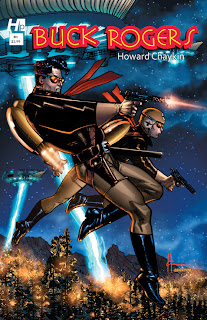 They say that a functional definition of insanity is doing the same thing over and over again expecting a different result. I may fit the bill. I have never cared for the writing of Howard Chaykin – and yet I have tried various of his comics over the years thinking that if he's as great as everyone thinks he is maybe I'll like this one. His art I actually kind of like, and in fact think it fits very well for something like we have here, the retro-flavored attempted revival of a beloved quasi-pulp character who deserves much more modern exposure. But I find myself invariably put off by the generally politically-charged revisionism that he usually imposes on such projects as he undertakes, which is invariably pretty much diametrically opposite to my own values. Add to that my belief, based on various things I've read and heard about him (seemingly confirmed in an about-the-author blurb appended to a two-page interview here, that “[h]e has a terrible reputation among fans for profanity, limited patience with nonsense, and spite”) as well as from him (see below), that I would not like him very much as a person, and I can't give you a good reason that I keep giving him repeated chances. But I do. Almost invariably with the same result as here – visceral revulsion.

By Gail Carriger, as printed in The Parasol Protectorate 3-in-1 Omnibus, vol. 1, by Science Fiction Book Club, 2011.

Okay, let's get this out of the way right off the bat: I have major theological/philosophical problems with the very idea underlying this series, specifically the rationale that supernatural creatures such as vampires, werewolves, and ghosts (as of the end of this first book, all that have been introduced – well, if you ignore the robot zombie that also appears!) result from a surfeit of “soul” in certain individuals who are balanced off by others who have a deficit of “soul,” the most extreme example being the “preternatural” heroine of these tales, Miss Alexia Tarabotti. I cannot truly conceive of a “soulless person.” It is, however, fairly easy to get past that dodgy foundational concept as a stumbling block – which I'm sure others wouldn't share anyway – by considering the quasi-scientific theory postulated to be about as accurate as others of the time-frame which provides the setting, the late 19th-century, e.g. that of a luminiferous aether that supposedly provided the medium through which light propagated [link] – which is to say, not so. I'm sure that by a century and more after Miss Tarabotti in that literary alternate universe of “The Parasol Protectorate” the anima theory of nature (my term) will have given way to something radically different as the "luminiferous aether" has fallen before quantum mechanics and general relativity. Indeed, the hubris of a scientific theory perversely co-opting a theological concept seems to me to fit well the zeitgeist of the age, especially in an imagined mash-up of steampunk and urban fantasy. The result is an indescribably clever and hilariously written send-up of Victorian England that is best described by the author herself in the introduction, “In Which Gail Discusses Building the World of the Parasol Protectorate”: 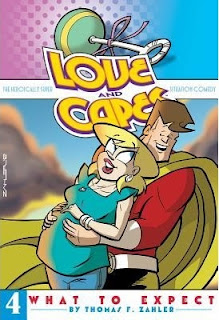 I have declared my high regard for the work of Thom Zahler a number of times now, have the pleasure of owning several commissioned pieces of art from him, and have had the privilege of meeting him in person two years running at Houston's Comicpalooza. My love for his work goes back several years now, to my discovery of the series with which he is most identified, Love and Capes: The Heroically Super Situation Comedy, as a web comic strip. At the time it was also being published as a small-press independent comic book, and was on the verge of the first collected edition being published by IDW, who have since continued publication of the comic book as a succession of short series each of which have subsequently garnered collections. This is the latest. 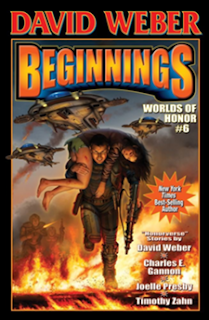 One of the greatest things about David Weber's Honor Harrington franchise is his incredible generosity in allowing others to play in the wonderfully (and increasingly intricate) sandbox he has created over the past two decades. Whole books and sub-series have been written – with his oversight, to be sure – by other great science fiction authors. This is in addition to the very actively involved consulting group BuNine which recently gave us The Honorverse Companion [link]. It all adds to the rich breadth and depth of the world in which Honor Harrington's own story is being told. This sharing of the Honorverse began as early as 1998 with the appearance of More Than Honor, which contained three novellae and short stories in addition to an extensive infodump regarding the background, history, and theoretical science of “The Universe of Honor Harrington.” That collection was followed by several more released with varying frequency over the next fifteen years, with stories written by a variety of authors both known and unknown to me – Weber himself always contributes, joined by such as David Drake, Timothy Zahn, Jane Linskjold, and S. M. Stirling – culminating in this, the sixth. Sure, the stories have been of varying quality and relevance, but they are always entertaining and more often than not, even when written by other than Weber, introduce characters and background that will show up and play integral roles in his own “main” narrative. None are to be missed by fans of the Honorverse.

In this volume we get, as usual, a mixture of novellae and short stories – I'm not sure where to drawn the line – two of which are by Weber himself. And as Weber's contribution to the very first volume gave birth a decade and a half later to the Star Kingdom series of Young Adult Novels, so does at least one of the other stories herein serve as a springboard for an ancillary series to come. As will be seen, I hope, in my short little discussions below, the overall title of this volume, Beginnings, is well-chosen.