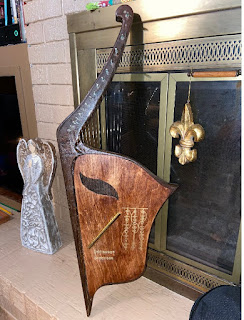 Originally posted as a comment to https://www.instructables.com/Acoustic-Vulcan-lyre/, reedited for blog.

I've long wanted a "harp" like Spock's [LINK, although I would argue it is more properly a "lyre" than a "lute"], but really only got the bug several years ago when I came acrooss an iPad app of a "Vulcan Harp" [LINK]. A long slow burn ultimately led to me buying a regular off-the-shelf lyre from Amazon [LINK], which merely fueled my desire. Around about Christmas last, I found an Instructables page entitled, "Acoustic Vulcan Lyre" (LINK above) and said, "I can do that!" Bear in mind I have never undertaken any woodworking project larger than a pinewood derby car (both as a Cub Scout and as the father of a Cub Scout). I spent the months since thinking, acquiring tools and materials, and launched into it at the beginning of this month. Based somewhat on Instructables author D10D3's fascinating instructions, I ended up with the picture above.

There was a lot of trial and error involved -- more error than trial, to be honest -- and in the end, for multiple reasons,it is not functional. It's made of layers: the core (full silhouette with the sound-box cut out) is 3/4" "MDF Redi-Cut," backed by (again, full silhouette) 1/4" "Luan Redi-Cut" plywood. The spine and arm are another layer of 1/4" Luan, while the "pick-guard" (I just call it the "front") is 1/8" "Bass wood." I wanted to string it like my 16-string lyre, from G3 up to A5 (albeit, unfortunately, in the opposite direction than I'm used to) so I got three sets of phosphor-bronze guitar strings, but immediately bad things started happening.

I don't remember the exact sequence of events, but in rapid succession I noticed that the tuning would immediately loosen and the pitch would plummet, because my layers of wood on the neck were separating even as the zither pin was leaning into the wood and tearing a gouge while the little ball-anchor thing at the bottom was pulling up into the wood on the back -- disappearing at least a quarter-inch into the back through a hole that was drilled out only to slightly larger than the string's diameter. Then the string broke (although I'm not sure how, given what I just said, it ever got enough effective tension to exceed the limit of the string). I am pretty sure that my gluing of the layers was ineffective (both in quality and coverage) as well as that the plywoods I used were too soft. With effectively 1/2" of Luan into which the zither pins were sunk on top of the denser "MDF," I also suspect that the zither pins were literally pushing on the latter rather than penetrating it even though I had predrilled the hole, because after I decided to simply string the instrument with fishing line for show the separation of layers still happened even when screwing in the zither pins without any effective string tension. Ultimately, I ended up with a fairly expensive (in time as well as tools and materials) display piece.

Nevertheless, I am going to give it another try -- with real hardwood and after consultation with a harp-string vendor to whom some of my lyre-group friends have recommended me for figuring out the best method for stringing it given the construction I am planning. All in all, it has been a great (if frustrating and ultimately disappointing) learning experience. I will, of course, report the results of attempt two....