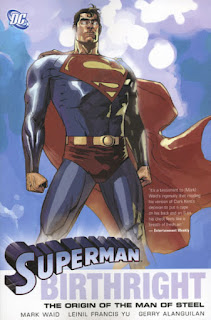 I was motivated to reread Mark Waid's retelling of the Superman origin for the 21st century by my growing awareness to near certainty that the upcoming Man of Steel movie is going to depend heavily upon it, much as the Nolan-helmed Batman Begins drew a great deal from Frank Miller's Batman: Year One. Having done so, I must say I am astonished that it does not appear among the “Six Must-Read Superman Stories” posted on the DC Comics website and blog just a couple of days ago.

Just to mention a some themes that the 2003-2004 miniseries and the 2013 movie obviously have in common: It was in Birthright that the \S/, which originated simply as a stylized “S” but with the 1978 movie became the crest of the Kryptonian House of El, was first explained as a Kryptonian symbol meaning “Hope”; the Kents exhibit a very realistic sense of trepidation and unease as to what might be the consequences should their son reveal himself to the world; Lois Lane tracks rumors of some kind of mysterious guardian angel; Kryptonians invade the Earth. Especially the latter element seems to be handled differently in the movie, where it appears that the invasion is very real, rather than being an elaborate ruse on the part of Lex Luthor, but the previews could themselves be deceptive. Part of me hopes not – if that is indeed a plot twist in the movie, it could be compared unfavorably to Iron Man Three even though Man of Steel is based on a prior source. And, to be sure, Zod doesn't play any part in Birthright. Some lines from Birthright seem to have made their way into Man of Steel, albeit differently: Ma Kent – “'Are we alone in the Universe?' is a question man has asked since time began … and you're the answer” (trade paperback, p. 74); Here it's Clark who assures Pa Kent, “You are my [father]” (p. 81). There are plenty of visual images, some of which are iconic and not at all original to Birthright, but striking nonetheless when reading it in light of the Man of Steel previews that have been appearing of late (Clark lifting part of a building on p. 40 is exactly the same angle as the movie's image, albeit without the flames). I hope we'll get an homage to the cover of the original Action Comics #1 in the movie as Birthright gives us on p. 50.

Reviews, commentary, general reactions, and random notes on the DC Comics that were released during April that I received near the beginning of May. Caution: Spoilers ahead! [ Link to previous month ]

Well, here it is … “WTF”-month. Thankfully, no “WTF”-branding, however, at least on the comics. Continued little bits of news regarding what seems to be total editorial and creative chaos at DC does, on the other hand, make me wonder if they ought to just change the overall comics brand from “DC” to “WTF”....

Actually, no. Just in case some numbskull there thinks that's a good idea.

Again, I really don't want to go into details, except to note the two just-announced changes that most directly affect my reading:

For the second year in a row, I attended the Texas International Comic Con at the George R. Brown Convention Center in Houston, Texas on Saturday of Memorial Day Weekend, 25 May. I had noticed just from the maps and information posted online that the venue was much larger this year than last, taking up basically all of the third floor of the huge complex, probably all of the second floor (which is smaller in floor space than the first and third, allowing the first floor halls to be two levels high), and about half of the first floor. All told, probably three times bigger than the not inconsiderable space of last year. Not that there were three times the attendees and activities – this time there was room to breath and the effect was much less claustrophobic than it was last year, especially on up in the afternoon. That was one very pleasant change in what continued to be a very well-run and enjoyable convention experience.

Another pleasant change was that for the first time I was able to share the con experience with a friend. Usually when I come to Houston for whatever reason, I stay with my sister-in-law and her husband; last year, my wife and son came as well to visit with her sister. But this year my sister-in-law and her husband were away on a trip, so my wife had no interest in spending the day in Houston. Therefore a friend came with me. This was his very first convention, which was itself kind of cool to observe.
Read more »
Posted by Kent G. Hare at 00:32 No comments: 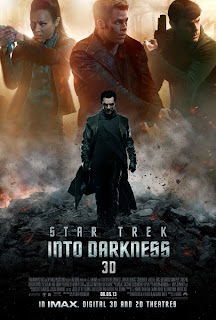 Abrams' reimagining of the Star Trek franchise continues into its second movie and again successfully balances the needs of the many (fans of the original series) against the needs of the … well, not few, nigh on fifty years on from its first appearance, but rather the other many (non-fans of the original series, whether because they are too young to remember it and are familiar only with its several successor series and films, or – and yes, these do exist – because they just flat-out didn't care for the original series or its several successor series and films). Which is to say he makes a film that both fulfills the requirements of a 21st-century summer blockbuster and deals with deeper issues of duty and morality along the way as did many or most of the episodes of the original series. Moreover, characters and events well known to those of us familiar with the original canon continue to appear and play themselves out in new and unexpected ways, both in the antagonist ultimately turning out to be “the most dangerous opponent [the original crew] ever faced” and the requisite cameo by “Old Spock” dancing around his own resolve not to give “Young Spock” information about his (the latter's) own future. Finally, there was the haunting twist on perhaps the most traumatic (in the lives of the characters) events of the original stories. All in all it was a thoroughly entertaining couple of hours that left me pleased and with something akin to a feeling of revisiting old friends that I have known all my life..

By Philip Francis Nowlan (originally published in Amazing Stories, August 1928 and March 1929, reprinted many times since, usually together)

I was a huge fan of the “original” Buck Rogers as a child, my parents having given me a huge coffee-table sized collection of almost random comic strips, both dailies and Sundays, The Collected Works of Buck Rogers in the 25th Century (1969) 'round about 1970 or so. It was without a doubt the very first collected comic material that I ever owned. And I loved it, spent many glorious hours reading and rereading it, until the big, heavy door-stop of a book (which I still have) nearly fell to pieces. (The first few years of the dailies are available here.) 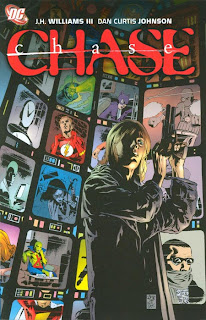 I finished reading this collection a couple of weeks ago after allowing it to sit unread on my shelf for a very long time, always intending to get to it but never actually doing so until toward the end of last month I picked it to be my “between-months” reading – what I read once I've finished my monthly mail-ordered comics before the next month's box comes in. I had initially been drawn toward it because Cameron Chase, Agent of the Department of Extranormal Operations, has been a major player in the New 52 Batwoman series virtually from the beginning, and this “cult favorite series from the 1990s” (back-cover blurb) was plotted and pencilled by the same writer-artist as produces the latter-day series, J. H. Williams III. I had, of course, encountered Chase herself in previous appearances here, there, and yonder through the years, most notably in Birds of Prey a few years ago, and I figured this would be a good way to get up to speed on the character.

Reviews, commentary, general reactions, and random notes on the Dynamite Entertainment comics that were released during April (mostly) that I received near the beginning of May. Caution: Spoilers ahead! [Link to previous month.]

Frankly, not a whole lot happens here except that the Master gloats over his plan. I still think he's the former District Attorney who was once the masked crime fighter known as the Clock, and that ultimately there will be a confrontation between him and the more recent D.A. Tony Quinn, the Black Bat.

I have two friends also buying this series. Unfortunately, I'm pretty much the only one enjoying it, I think. And the truth is that there's not much here. Were I not such a fan of the original source material and characters – even some that this series pretty much introduced me to, such as Miss Fury and the Black Bat, I can easily see myself agreeing with them. 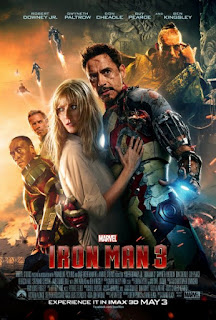 I got back earlier today from seeing the newest Iron Man movie, a week after it debuted. Last weekend was eaten up by various other activities, duties, and happenings, some good, some not so good. Then this was finals week. But I finished up yesterday and turned my grades in, putting a particularly grueling semester behind me.

My first reaction is that I liked it, very much. I'm such a fan of the first Iron Man movie that I can't say this one is better, but I enjoyed it every bit as well. That is not something I could possibly say about number two, not even during the initial viewing. And frankly, as you may have gathered over the course of a couple of years, more often than not my first impression of a movie like this is positive. Sometimes I even look back at my own reviews after the passage of some length of time has given me a bit of perspective and frankly a bit more objective opinion and thin, "Boy, I was too kind!" Not just movies – I'm the same way with just about anything. But my enjoyment of the first movie has not faded but has rather grown from the initial through repeated viewings, most recently in a cable-channel rerun last weekend. On the other hand, what was a “meh” reaction to the second upon seeing it in the theatre has grown into active dislike as I've caught bits and pieces (never the full movie) in reruns. On the third hand, so to speak, I do look forward to seeing three again.