Various Things I’ve Read in the Past Couple of Years 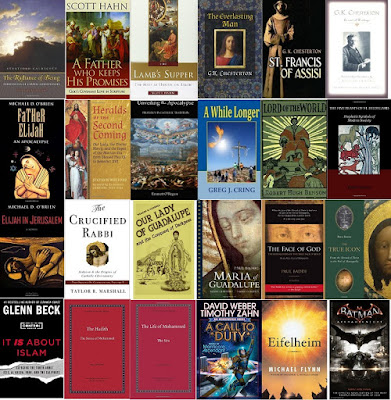 Obviously, if you look at the Blog Archive at left, you’ll see that my posting to this blog has dwindled to barely a trickle in the past couple of years. There are several reasons for that. One is just simply having less time – I’m now more involved than ever in my church. One is that for a long time the bulk of my postings here resulted from a rather heavy schedule of comic-book reading and compulsive reviewing that left me burned out on that a couple of years ago, even as in my opinion DC Comics’ output largely went off in directions that I have little interest in following, such that at present – and for most of the past year – I’ve not been buying and reading monthly issues anymore at all, and have been picking up very few of the trade collections that they’ve put out. Finally – and this is at least somewhat related to both of the above – my interests have undergone another of my periodic shifts, this time back toward reading a lot more religious and spiritual material than I did for a long time. Personally, I think that’s a good thing for my soul, but it’s not something I’m usually as interested in blogging about as the largely meaningless comic books or other fiction that I was engrossed in for many years before the past couple.
Read more »
Posted by Kent G. Hare at 21:19 No comments:

Great News for America: The Constitution, Freedom and Prosperity are Coming Back! (2016) 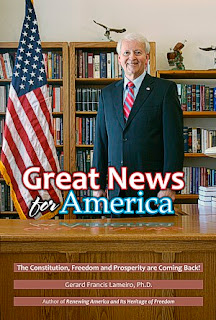 This book was recently reviewed [LINK] on a website I follow, Maccabee Society: A Journal and Community for Men [LINK] (“Men” should have “Conservative Christian” in front of it; the site is kind of like The Art of Manliness [LINK] with a specifically Christian slant). The author purports to analyse American history and predicts, based on historical cycles and so forth, that we’re about to experience a conservative groundswell/landslide in the upcoming elections that will transform the United States for a generation, resetting American government back to what the Founding Fathers intended.

Needing a little good news in what seems like a constant barrage of bad news on just about every front, I grabbed this book on Kindle and read it over the next few evenings after the aforementioned review appeared, then gave myself a couple days to digest it. Unfortunately, my initial impression did not change upon reflection. I found this book to be so unrealistically optimistic (as well as extremely poorly written and edited) as to be laughable – and no encouragement whatsoever. It is a great exercise in wishful thinking and nothing more. Besides ignoring how deeply entrenched the entitlement culture is in our society, Lameiro does not deal with the fact that there really is no viable conservative candidate still in the 2016 race that he sees as the key “inflexion point.” Trump certainly is not "conservative" no matter how he tries to sell himself as such today. Cruz is still in it, of course, but despite my personal preference for him among the announced candidates almost from the beginning of the '16 campaign, the sad fact is that he polarizes so greatly that I think having him as the nominee – which is unlikely given the current delegate numbers unless the Republicans blow up the convention to keep Trump out, which would be a disaster because Trump would then go rogue third party and split the vote – would assure a Democrat victory. The same is true, although perhaps to a lesser extent, if the Republicans put up someone else (Ryan? -- based on some of Lameiro’s recent posts at his book-centered blog [LINK], he seems to lean that way) which would, I think, end up losing at least some of Cruz's support from sheer pissed-offness. Without naming names, Lameiro seems to attempt to address those possibilities in the abstract, but not convincingly.

I just do not see an upsurge of truly conservative values-based governance – or a demand for such from the American people – coming. Maybe I'm wrong. I hope I'm wrong – and it would please me greatly to be able to revisit this post in eight months or so and eat crow – but I don't think it's going to happen. I really think our country passed the tipping point with the 2012 re-election of Obama (who had already proven himself the worst President we'd ever had, and has since descended even deeper into partisan disgrace), as I said then in my blog-commentary, "eyes wide open" [LINK].

Musings on a Second Viewing of Batman v. Superman: Dawn of Justice 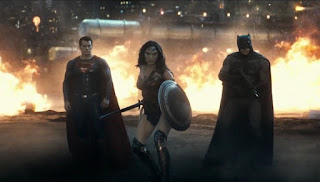 This is actually being written several days after the fact. On Friday I went to another matinee showing of Dawn of Justice, this time with a friend. I enjoyed it again, maybe even more. What's more, my friend – who did not, by the way, see Man of Steel at all – also enjoyed it, although he is not a comics fan. About ten years older than myself, he has what I figure is pretty much a normal familiarity with the characters, based on reading comic books when he was young. And he enjoyed it. Which, along with the generally-positive audience assessments reported even by Rotten Tomatoes, further confirms for me that the critics' panning of the movie is largely rubbish.

I definitely picked up on a couple more things, as well – Lex did turn over the painting so that the demons were coming out of heaven; the music when Wonder Woman was introduced was foreshadowed when Bruce opened the file containing her World War I picture. Given that Hans Zimmer was joined in the music credits by another name (I don't remember it, but it's the same as has been announced for the upcoming Wonder Woman solo movie), I think we got a preview of the general style of music we have to look forward to there. I can't say it's really to my liking. Oh well.

I still think overall the movie had some uneven editing, particularly in the beginning. But I do not agree with those critics who call the movie unrelentingly “joyless” or that Superman never cracks a smile – or worse, that he was utterly alien and unrelatable. I think he was all too human in his emotional turmoil given the seriousness of the situation. It was a serious movie, overall – like most “serious” comic book movies marred by the requisite world-threatening menace at the end – but a serious movie with serious underlying themes of conflicted humanity vs. The Other, matters of appearance and perspective, and – as pointed out in one brilliant review I read but have typically lost – how the media drive that. It was not a Marvel movie. And those people wanting to see a Marvel movie were doubtless the most disappointed in this movie. There, I said it. This – was – not – a – Marvel – movie. And in those places where it tried the most to be one – Jesse Eisenberg as Lex Luthor – it was at its weakest. But overall, I was pleased with it, more so than I feared I would be given how far I knew it was departing from what I believed the sequel to Man of Steel should be. Frankly, that was not going to happen, given the virtual imperative in these kinds of movies to always outdo the last one in sheer spectacle, which usually comes at the expense of story.

One other impression I did have, in conclusion. I did not time things, but I was surprised at how, this go’round, it seemed that the fight-scenes at the end were relatively brief and swiftly told. I think they loom largest in our memories because they are virtually the last things that are seen, but I wonder just what percentage of the running time of this movie they really are, as opposed to story/plot/narrative…?

That's pretty much all I have to say about that. Thanks for reading.
Posted by Kent G. Hare at 16:31 No comments: