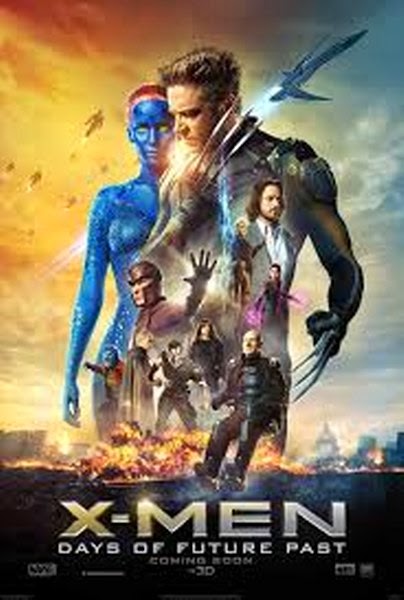 I remember as if it were yesterday reading my subscription copies of the original Uncanny X-Men #141 and 142, 'way back in 1980, only a few months after the shocking conclusion of The Dark Phoenix Saga in issue #137 and, unbeknownst to me, only an issue away from the break-up of the very best creative team ever to grace those pages. Writer Chris Claremont and artist John Byrne were at the top of their respective games at that point – in sharing co-plotting duties they created a whole that was considerably more than the sum of its parts – and I remained what I had been for the previous four or five years, a rabid “X-fan” during the only period of my life when I may well have been buying more Marvel comics than DC. My devotion to the franchise would slowly wane over the half-dozen or so years after the departure of John Byrne (his last issue was the tour-de-force #143), arrested only briefly during the tenure of Paul Smith (#165-175). Glee at the return of the “New” X-Men's inaugural artist from the mid-late 1970s, Dave Cockrum, with issue #145 quickly gave way to dismay that the artist whom I had long regarded as my absolute favorite had lost something in the interim – I found Cockrum's art much cruder this second go 'round, especially in contrast to the incredibly smooth, expressive draftsmanship of John Byrne.

But as so often happens, I ramble on. The point is this: “Days of Future Past” (Uncanny X-Men #141) and “Mind Out of Time” (#142) – yes, it was a mere two issues, but in those days a typical issue of a comic book packed in as much story as a modern-day five- or six-issue story arc! – had an incredible impact on my late-teen-year-old self, and (I suspect) on others as well. Let's just say that in my opinion the commentary implicitly or explicitly attributing this new movie's time-travel plot – heroes in a dystopian future dominated by giant robots send one of their number into the past to change history and prevent the apocalypse (errr... Can I use that word?) – to Terminator have things as incredibly backward as those who ignorantly called John Carter [of Mars] a rip-off of a century of science-fiction cinema! I have believed that James Cameron had to have read Uncanny X-Men ever since I first saw Terminator in 1984. I've never seen that discussed, and I figure it's about as likely to be admitted as that Gladiator was a turn-of-the-century retread of 1964's The Fall of the Roman Empire.

Anyway, I have read and reread the original story many times – I have owned it in at least five different printings from the original issues (which I still have) to the most recent deluxe hardcover of the same title (X-Men: Days of Future Past) compiling the original story with thirty years of follow-up stories as Marvel could not resist going back to the “DOFP” well over and over again! I have been looking forward to this movie with my typical mix of anticipation and dread (my default attitude regarding upcoming comic-book movies) ever since it was announced during the unexpected success of X-Men: First Class several years ago. I began getting more excited about it a year ago almost exactly when I had the pleasure of hearing both Chris Claremont and Patrick Stewart express their own enthusiasm (which seemed genuine, but you can never tell how much is real and how much is just wanting to make sure their own paycheck is as big as possible) for the movie at Comicpalooza 2013 (LINK). As usual, the barrage of trailers and clips leading up to the big release this weekend looked good, but it's almost impossible to tell from those whether the final product will be an incomprehensible mess (a real danger with this type of movie compounded with the huge cast of characters brought into the story) or not. Nonetheless, this was a movie I had to see as quickly as possible.

And so, on its first day of release I was there for the very first afternoon showing. To cut to the chase, I really liked it. I don't consider it the best super-hero movie ever made, and probably not the best of the year, but it is without a doubt the best non-Marvel Studios effort at a Marvel Comics movie (don't get me started on the licensing issues) … and Marvel Studios is going to have a tough time living up to this film's achievement in one hilarious sequence where there is a unique licensing overlap between Marvel itself and 20th-Century Fox! – they have been thoroughly one-upped in advance, I feel.  It is, of course, the best X-Men movie, and reconciles (for the most part) the differences between Bryan Singer's first two offerings and the reboot/prequel First Class, while simultaneously wiping the slate of the unfortunate story consequences of X-Men: The Last Stand and in no way invalidating that film – time travel and alternate universes can be extremely useful! I think the X-Men franchise is perfectly poised to go forward from here.

(And going forward from here there may well be SPOILERS...) 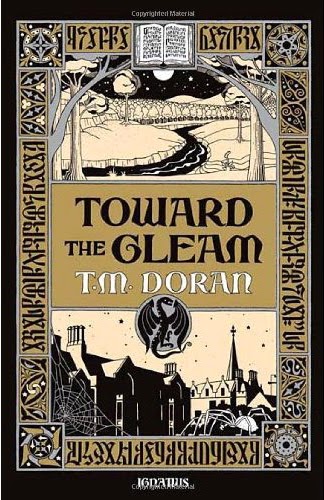 I have a fondness for novels featuring historical characters experiencing fantastic but fictional adventures. By this I mean not “historical novels” retelling historical events in the form of a novel, where the author strives to adhere as closely as possible to events as they actually happened while necessarily supplying dialogue, minor incidents, and even peripheral characters as necessary to create a dramatic narrative out of the facts as we know them (examples abound, but springing first to mind are Colleen McCullough's Masters of Rome series), or even fundamentally fictional stories featuring a fictional character set firmly within a historical context and events, interacting with historical persons (e.g., Max Allan Collins' Nathan Heller Mysteries [LINK]). No, I mean something more akin to Paul Malmont's novels, The Chinatown Death Cloud Peril and The Astounding, the Amazing, and the Unknown [LINK], the former placing the 1930s writers of hero pulps in their own hair-raisingly pulpish adventures complete with reanimated corpses and the Yellow Peril, the latter similarly focusing on the 1940s pioneers of science fiction in a fantastic war-time plot to recover a Death Ray defense against the Axis. In fact, as I write this I realize that those latter two novels exemplify what I really find compelling, imagining the writers of fantastic fiction plunged into the midst of their own fantastic adventures.

A couple of months ago, I read (and reviewed) No Dawn For Men: A Novel of Ian Fleming, J. R. R. Tolkien, and Nazi Germany [LINK]. My assessment of it was somewhat mixed, both because of a rather pedestrian writing style that did not successfully emulate that of either author and because it did not succeed in imparting a necessary suspension of disbelief that these could indeed be “the real story” behind the authors and the creation of the the literary monuments for which they are known. Neither of those criticisms apply to this book, however, which was recommended to me by our parish priest, with whom I share a love for all things Tolkien, around the same time I had heard of and already ordered No Dawn For Men. The intriguing prospect of a mash-up of Tolkien and Fleming in a spy adventure on the eve of World War II had me read that book first, inadvertently saving the better for later. If No Dawn For Men is a simple pot-boiler thriller, Toward the Gleam rises to the level of literature – while remaining an edge-of-your seat thriller. Which is no mean accomplishment given how much discourse and dialogue is contained in these pages, working in a great deal of the changing philosophy and world-view of the early twentieth century. That latter feature, as well as the characters and literary connections posited, make it obvious why Ignatius Press, a relatively small Catholic publishing house specializing in orthodox theology and philosophy as well as fiction picked up this book [LINK]. (As with many other of its books, Ignatius' page for this book [LINK] site hosts a reading guide [LINK] as well as a great embedded Youtube “book trailer” [LINK].)

Before I get to a more spoiler-filled discussion of some particular elements of this book that struck me as noteworthy, here's a general overview of the plot: A young English scholar, recuperating from injuries suffered on the front-lines of the World War I, discovers a mysterious box containing an ancient manuscript bound in red, written in an unknown language. His linguistics training allows him to laboriously decipher over a decade and a half or so the lost tales of a long-departed age – but his obsessive quest to understand the historical context whence came the book brings him to the attention of a great enemy who demands the knowledge contained within the book for himself, toward the end of world domination. Much of this tale is a tense cat-and-mouse game in which we experience along with the scholar the dread of an approaching doom that seems almost a force of nature, tempered with the support of a close fellowship of academic colleagues as well as a loving family and clear-headed, eminently practical and down-to-earth wife, climaxing in a one-on-one confrontation within the hallowed halls of Oxford University itself.

The rest of this review contains spoilers which, while not giving away the overall story itself beyond the brief summary above, may well ruin a lot of the reading experience; if you've not yet read the book for yourself, I would suggest you do so before going any further....
Read more »
Posted by Kent G. Hare at 15:58 4 comments: 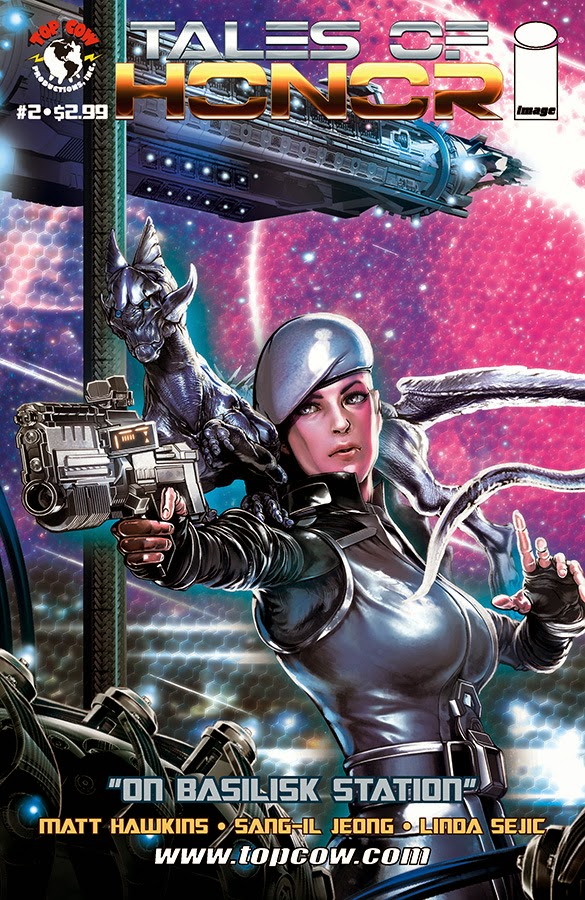 Continuing a five-issue adaptation of On Basilisk Station, by David Weber.

There's not a whole lot I can say about this second issue that I didn't say about the first [LINK]. My overall assessment remains the same, that it holds up very well as a graphic novel adaptation of the introductory volume to David Weber's ever-expanding Honorverse, told through the memories of the main character, Honor Harrington, looking back on her first starship command from captivity and probable execution as a war criminal. I will emphasise that script-writer Matt Hawkins seems to know the Honorverse like the back of his hand and by this narrative device provides a unique perspective that makes this a refreshingly original version of a story I've read and reread in Weber's original prose. It is not simply a straight illustrated retelling of the original “tale of Honor,” but manages to be something that both contributes to this longtime aficionado’s appreciation of the Honorverse and is, in my opinion, accessible to someone unfamiliar with the world and characters. I hope there are comics fans who will be turned on to the novels by this new presentation, although I've seen no sales data and have no idea how these first couple of issues have done. My hope is, very well.