I don’t have a whole lot to say about this movie that I haven’t said already in my reviews of the first two installments (An Unexpected Journey [LINK] and The Desolation of Smaug [LINK]).  Ultimately, for all its flaws, which are many, I loved this film.  For all its flaws, which are many, I love Peter Jackson’s vision of J. R. R. Tolkien’s Middle-earth and look forward to revisiting it from time to time.  It saddens me that there are no more new installments in the works despite a wealth of treasure that could be mined out of The Silmarillion. 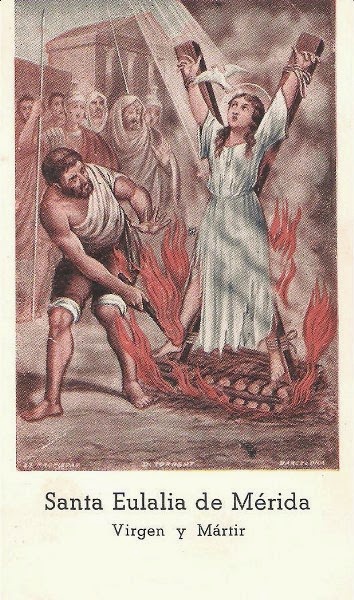 Today is the feast-day of St. Eulalia of Merida.  A short hagiography reads like this:

“St. Eulalia of Merida, Virgin and Martyr (Feast day - December 10) Eulalia of Merida was born in Spain in the last decade of the third century. It is almost universally accepted that she suffered martyrdom for the Faith. What little else is known of her to date is based mostly on legend. It is believed that Eulalia, as a twelve year old girl, tried to remonstrate with Judge Dacian of Merida for forcing Christians to worship false gods in accord with the edict of Diocletian. Even though Dacian was at first amused and tried to flatter her, Eulalia would not deny Christ. Finally, Dacian ordered that her body be torn by iron hooks. Fire was applied to her wounds to increase her sufferings, and in the process her hair caught fire. She was asphyxiated by the smoke and flames, gaining the crown of martyrdom around the year 304.” [SOURCE]

The reason I highlight this is that as our priest was relating this story during his short homily this morning during Mass, my mind immediately leapt to the reality that although we typically think of the age of martyrs as being a feature of the early Church, almost two thousand years gone, the fact is that it is a living reality being played out in the stark horror that is engulfing the Middle East today.  Over the past several months – besides the well-publicized Youtube propaganda that has been put out by the barbaric Islamic State itself – reports have been pouring forth of the atrocities being perpetrated on the rapidly diminishing Christian minority population of that region.  Over the past several weeks, reports have emerged of Christian children being martyred for not renouncing their faith and proclaiming the false doctrine of Mohammad.  For whatever reason – a resurgence of “interest” or new reports I do not know – my Facebook feed yesterday contained a number of “shares” of news stories related to this, e.g.:

“ISIS turned up and said to the children, ‘You say the words that you will follow Mohammed’. The children, all under 15, four of them, said no, we love Yeshua, we have always loved we have always followed Yeshua, Yeshua has always been with us.  They said: ‘Say the words.’ They said ‘No, we can’t.’ They chopped all their heads off. How do you respond to that? You just cry.” [Canon Andrew White, SOURCE]

… And you ask yourself:  How long are we going to tolerate this monstrosity?  And, lacking any action against them now:  When they come for you (as they will), will you have the faith and the strength to affirm that you are a follower of Jesus, that Jesus is always with you, and that you will not forsake Him?

Seriously, do you – do we, do I – have the faith of one of these children? – St. Eulalia, or the Modern Child Martyrs of Iraq?
Posted by Kent G. Hare at 10:01 No comments:

Just because today is, of course, his feast day.