The Evil in Pemberley House (An Original Pat Wildman Adventure, 2009/2014) 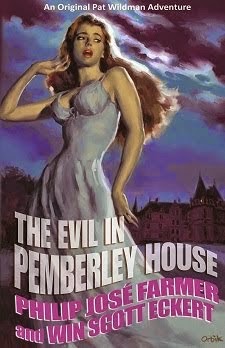 This is a book I knew going in I would have mixed feelings about coming out.  They are pretty much the same mixed feelings I have about Philip José Farmer as an author.  And this review is mostly going to be about that, as well as the larger context in which this novel resides.

On the one hand, Farmer is indisputably one of the grand masters of 20th-century science fiction, with a special place in my heart for his creation of the “Wold Newton Universe” in which this novel resides – the context I mentioned.  In case you don’t know, the Wold Newton Universe is a literary construct by Farmer which ties together most of the big names in literature, especially those in the genre of fantastic and heroic adventure fiction, via intricate webs of relationship that ultimately go back to a documented historical event, the fall of a meteor near the northern English village of Wold Newton in the 1790s [LINK] – according to Farmer, in close proximity to a number of members of the English upper class who happened to be riding by in a carriage at just that moment and who were affected by ionizing radiation from the meteor which caused a series of beneficial mutations among their descendants, literally creating an extended family of geniuses and supermen.  These include the “historical prototypes” of such literary characters as Sherlock Holmes, Tarzan, and Doc Savage – as well as Professor Moriarty and Captain Nemo (who may or may not be the same person) – and many, many more, both heroes and villains.  Farmer’s thesis first found expression, I believe, in two extended essays and genealogical charts appended to his faux biographies Tarzan Alive: A Definitive Biography of Lord Greystoke (1972) and Doc Savage:  His Apocalyptic Life (1973).  At least that’s where I first encountered it.  Those two essays are truly tours des forces of literary-historical synthetic rationalization and are well worth reading on their own.  Both have been reprinted in newly edited, by Win Scott Eckert, expanded editions within the past few years (2006 and 2013).  I devoured the paperback volume on Tarzan when I couldn’t have been more than ten or eleven (and for a brief time, bought the thesis – hook, line, and sinker!), and the Doc Savage book within just a few years afterward (age thirteen?), and would not hesitate to hand either of them over to any young reader interested in those specific characters and a fantastic introduction to a world of great literature and a lifetime of great reading. 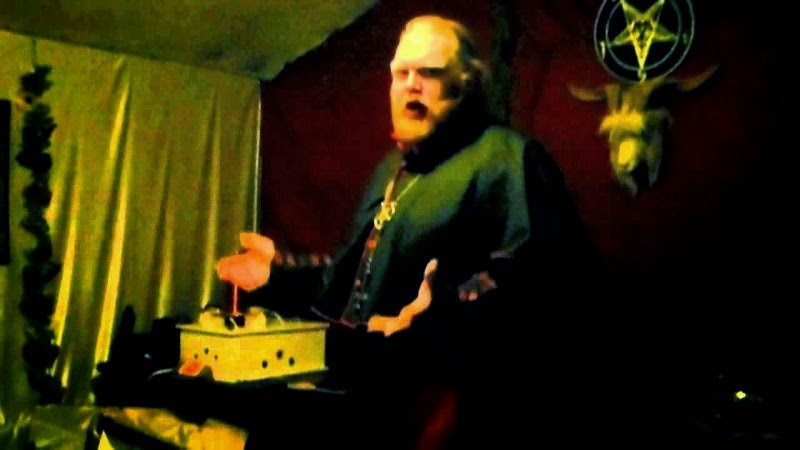 Well, the “Satanic Black Mass” went on as anticipated a couple of days ago in the Oklahoma City Civic Center.  It was attended by a few dozen – reportedly about half the number that were expected [LINK].  About the same time, near and far, various forms of reparations were being offered for the blasphemous sacrilege that was being perpetrated on the Body of Our Lord – from protests outside the Civic Center greatly outnumbering the “Black Mass” attendees within, to Masses and Holy Hours all across the land.  Our weekly Traditional Latin Mass was lengthened somewhat by the addition of prayers of reparation; when we arrived back home afterward, EWTN was in the middle of a Holy Hour.  Which means that, however demonic was the intent of “self-proclaimed Satanist” Adam Daniels (allegedly above) and his ilk, the event became the occasion for a great many much more powerful acts of public witness to Catholics’ belief in the Real Presence of Our Lord in the Blessed Sacrament – the center of our Faith.

For the Feast of the Exaltation of the Cross: The Dream of the Rood

Although this has nothing to do specifically to do with the historical origins of the current feast [LINK], it seems appropriate….

"Lo! I will tell the dearest of dreams
That I dreamed in the midnight when mortal men
were sunk in slumber. Me-seemed I saw
A wondrous Tree towering in air,
Most shining of crosses compassed with light.
Read more »
Posted by Kent G. Hare at 20:06 No comments:

A Generation of Terrorism

The other night, after I had posted my thirteenth-anniversary comments regarding 09/11 [LINK], my wife and I were talking to our son, who is now in his first term of college, living away from home for the first time.  And I realized something:  It was during my own first term at the same university, 35 years ago, that the Iranians treacherously invaded our embassy in Teheran and the Iran Hostage Crisis began, bringing the issue of Islamic terrorism home to the United States in a whole new way.  A “generation” is a very unspecific measure of time, of course, but the fact is that by the measure of my lifetime, with jihad now raging across the Middle East and acts of terror being perpetrated around the world, and although the 1990s seemed a lull that proved to be false, the world has endured a long, third-of-a-century-and-more, generation of Islamic aggression that shows no signs of abating, only escalating.  We are in a war, and have been since before 09/11, which at present We Are Not Winning.  I pray that a generation hence the world which my son has inherited and passed on to his children has not fallen before “the cruel children of the lonely God … who with scimitar in hand have laid waste the world” (G. K. Chesterton, Orthodoxy, chapter 8).

Thanks for reading.
Posted by Kent G. Hare at 13:21 No comments:

This the thirteenth anniversary of the World Trade Center/Pentagon Terrorist Attacks of 2001.  At no time in the past ten years has there been such danger of a repeat of that horrific day as there is today, I believe.  The reason is that any gains in the “War against Terror” that were made during the Bush years – however imperfectly, at least he realized that we are at war – have been thrown away by his unworthy successor.  All the tough talk that came out of Obama’s mouth last night cannot change the fact that the current mess in the world – domestically, yes, and internationally in more places than just the Middle East, but that is the most demonic and existentially threatening – is largely of his own making.  The so-called “Islamic State” – I refuse to call it “ISIS” or “ISIL” (“Islamic State of Iraq and Syria/the Levant”) because the geographical limitation implied by either is not in accord with Islamic ambitions, and anyone who thinks that Islam will be content with either and not total world submission is a fool; better to recognize it for what it is, Dar al’Islam, the “House of Islam,” that conceives itself in a neverending war with Dar al’Harb, the “House of War,” i.e., anything outside Dar al’Islam – has exploded onto the scene in the past few months largely due to the Obama administration’s criminous inaction.  The threat was predictable – and predicted [LINK] – and ignored.  And I believe darker days are ahead, because I see little evidence that Western Civilization realizes its true danger  or has the resolve to do what it will take to survive.

That does not mean I have no hope – despair is a sin – but my hope is in the True Faith, feeble though it seems in today’s world.  In times past, when the West was so threatened by the very same enemy in the darkest of days, miraculous aid turned the tide (1571, the Battle of Lepanto [LINK]) – but that was when the West could still be called “Christendom.”  The concept of “Christendom” seems laughable today, and is in fact offensive to many, but without its revival I fear we stand no chance.  And so today, as every day, I pray for the Revival of Christendom and the Confounding of Her Enemies.  Deus vult!

Note:  As you may know, I have been reading a lot of G. K. Chesterton lately.  Among his voluminous writings is a poem, Lepanto [LINK].
If you would like to read my thoughts from the tenth and eleventh anniversaries, follow the respective links.  [2011] [2012]

ADDENDUM:  Bill S. at RedState.com expresses the far more precarious state of the world today, and its cause, very well [LINK].

Some Comparative Comments on the First Look at the Didache Bible 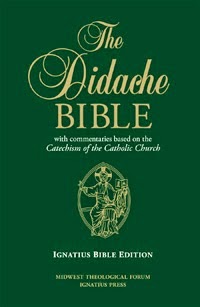 I’ve always lamented that there does not seem to exist a good one-volume study edition of my favorite (because I think it’s the most accurate) translation of the Bible, the Revised Standard Version Catholic Edition (RSV-CE).  There are, of course, the multivolume series of the Navarre Bible (with their inclusion of the Vulgate Latin and annotations based on the Fathers, Doctors, and Magisterium of the Church) as well as the Ignatius Catholic Study Bible (similar to the Navarre Bible, but no Vulgate and annotations based more on modern scholarship).  Compilation volumes comprising various individual volumes of both Navarre and ICSB have appeared (in the latter case, mainly a one-volume New Testament which I have in the Kindle ebook edition), but neither is published in a one-volume full Old and New Testament edition.  All existing one-volume RSV-CEs have hitherto kept annotations to a bare minimum, mainly an occasional translation note and cross-references on the same page with some not very extensive “Explanatory Notes” relegated to a few pages at the end of the Old and New Testaments respectively.  That’s the case with both of the RSV-CEs that I own: