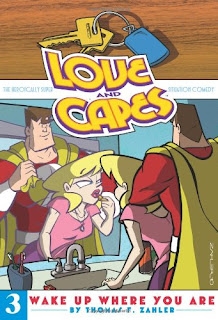 
I discovered this wonderful series a couple of years ago as a webcomic. If you want a quick taste of what it's like, check it out here: http://www.loveandcapes.com/ . Within a few days' installments I had quickly determined that I love this series, and sent off for the first collected volume that had just recently appeared. I've picked up the second and third as they have become available.

It's exactly what the tag-line says: “The Heroically Super Situation Comedy.” I can't better the descriptions to be found on the back covers, so I'm just going to quote them very heavily here: 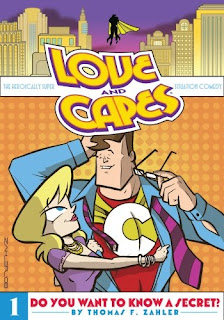 In the first volume, Do You Want to Know a Secret, we meet Abby and Mark, “a typical couple. At least, that's what Abby thinks. Unbeknownst to her, her boyfriend is not just an accountant, but also the super-powered crime-fighter, the Crusader. And tonight, Mark's going to let her in on the secret.

“Abby always knew he was a good guy. She just didn't know how good.”

We follow their romance through ups and downs familiar to every couple – and ups and downs unique to the super-heroic life – told with a marvelously offbeat humor that skilfully straddles the fine line between straightforward comicbook goodness and a satirical look at that same comicbook goodness. Zahler manages this generally through standard eight-panel pages, each made up of two sets of four that each originated as a single day's installment – without the rhythm of basically two punchlines per page becoming tiresome as I would think it could very easily. 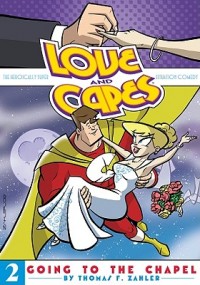 As the first volume chronicles Mark and Abby's courtship, the second – entitled Going to the Chapel – describes their engagement and preparations for a very unusual super-hero wedding. Unusual as in nothing untoward happens. No great crisis in the event itself … just a whole lot of life's little crises leading up to it. It's not so much that “The groomsmen all wear capes.” It's that “the maid of honor [Abby's sister Charlotte, one of the many well-defined supporting characters in this series] is moving to Paris, and the perfect dress is nowhere to be found. Add to that a dash of super villainy and Amazonia, Mark's ex-girlfriend, and you've got all the elements for a crisis of infinite proportions.” And yet in the end it all works out in a remarkably normal ceremony … which I must reiterate makes it a very unusual super-hero wedding!

Or, as the back cover blurb of the most recent volume three, Wake Up Where You Are, puts it, “They finally got married and, unlike most superhero weddings, no one got hurt.” This latest volume tells what comes next – “Now comes 'happily ever after.'”

“But, for our newlyweds, 'ever after' includes new relationships, secret identity problems, Abby's high school reunion, and Mark's inner child becoming much less 'inner.'” Because, “The wedding wasn't the end of the story, it's just the beginning.”

Finally, more goodness is promised, with the final full-page splash panel, Abby and Mark shouting joyfully, “WE'RE HAVING A BABY!”

There are all kinds of things I like about this series. One is the likeable and well-developed supporting cast, both Abby's sister Charlotte (as well as other members of her and Mark's respective families), and Mark's fellow super-heroes. Crusader's world is populated by many clear analogues for the various archetypical characters of DC and Marvel Comics – his best-friend, the non-powered world's greatest detective and “creature of the night” Darkblade; his aforementioned ex-girlfriend the stunningly beautiful (and head of her own cosmetics empire as well as a princess and super-heroine) Amazonia; and many other members of the Liberty League sporting charmingly silly names like Arachnerd, Mermantis, Doc Karma, Major Might, and Blurstreak.

I keep using the terms “well-developed” and “well-delineated” to describe the characters. For a comic book “situation comedy,” Zahler has done an amazing job of rounding out these characters, making Mark and Abby very quickly become people you feel you know very well – and like very much. One other thing I like as part of that is that, unlike many other such popular culture characters these days, a religious side to the characters is not just ignored. It's not overbearing or anything, but both Mark and Abby are portrayed as basically Christian – Catholic, I think, although I could be reading my own faith into them. They are married in a traditional Church ceremony. It's portrayed as a positive force in their lives, not as a source of angst or in any negative way.  It's just part of their lives.  And one of my favorite cartoons from Zahler's blog, posted for Easter last year, makes a very good – and very human – point about missing the point: 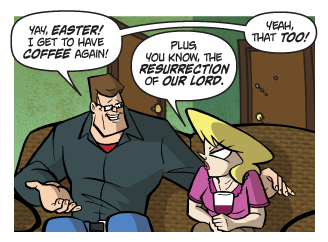