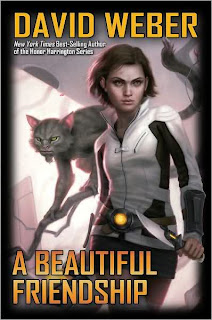 
This is presented as the first in a prospective series of “Young Adult” science-fiction novels set in the “Honorverse” of Weber's Honor Harrington and related novels set in the Manticoran Star Kingdom. It's actually not entirely new. The first third or so is actually a revised (I presume, but I didn't really compare) version of a novella of the same name published over a decade ago in the first “Worlds of Honor” collection, More than Honor (1998). There we meet Honor Harrington's four-centuries-great-grandmother Stephanie Harrington as an eleven-T[erran]-year-old immigrée to the recently-settled Manticoran frontier world of Sphinx, and learn how she made first contact with the native species of Sphinxian sentients, the arboreal six-limbed “telempathic” (my word) “treecats” (Stephanie's word). The circumstances of her meeting “Climbs Quickly,” whom she dubs “Lionheart” while she earns the tree-cat name "Death Fang's Bane" – plus the unusually strong “mind-glow” of the precocious young "two-leg" – forms a bond between the two that foreshadows the one we all know and love between Honor and Nimitz.

The bulk of the novel is pretty much new, although it too builds somewhat on another novella from a later “Worlds of Honor” anthology, written not by Weber but by one of the other authors he allows to play in his sandbox – “The Stray” by Linda Evans, in Worlds of Honor (1999). The discovery of the treecats on the world previously believed to be an uninhabited wilderness totally open to human settlement naturally causes a bit of an uproar. How sentient are they? What are the implications for those who most have a stake in the natural resources they'd previously believed were simply there for humans to take? Briefly, just a couple T-years later Stephanie and Lionheart end up being central to thwarting a plot by an offworld purveyor of “exotic pets” attempting to abduct as many treecats as he can. “Exotic pets” would be the preferable of the fates of his victims. He also intends to sell some for research into the genetic basis of their telepathy.

I found this book to be very enjoyable, not quite on the level of the Honor Harrington stories themselves with their intricate political machinations as well as rip-roaring space battles (that's a very high bar!), but a quite believable portrayal of a young girl and her adventures on a wonderful new world, discovering a wonderful new friend and experiencing hair-raising adventures that test her courage and character. Weber's penchant for “intricate political machinations” does appear here as well, and might well make some of the exposition in a few places a bit difficult for “young adult” readers to follow. I'm not the best judge of that. I'm intending to give this book to my niece for her eleventh birthday later this month, and maybe I can get some direct feedback from her.

And I'm looking forward to the second novel in the series, Fire Season, which comes out in October.

One thing this book did was remind me greatly of my memories of reading H. Beam Piper's Little Fuzzy when I wouldn't have been a whole lot older than my niece – a similar tale of first contact between humans and a cute little alien species (George Lucas doubtless based the Ewoks on Piper's fuzzies) dealing with the same issues of how do you judge alien intelligence, and how do you balance interests between humanity and a desireable planet's natives. I've got a hankering to go back and reread that novel again. If I recall correctly, it was one of the first two books I got when I first joined the Science Fiction Book Club for the very first time (I've had three separate stretches of membership, spaced out over almost forty years), and that copy – part of one of the SFBC's “omnibus” editions pairing Little Fuzzy with its sequel, Fuzzy Sapiens – is long gone. But for some reason, even though Little Fuzzy is not even as old as myself, being first published in 1962, much of Piper's work has passed into the public domain and is available through Project Gutenberg.