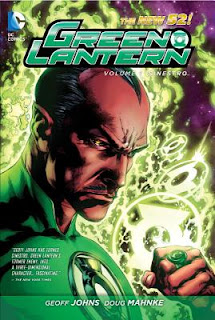 
This is the first – and so far only – “New 52” DC collected edition that I have purchased. It's a series that I had enjoyed back in the pre-Flashpoint days, but had gotten a bit burned out on of late, what with several major “events” centered around it in quick succession (The Sinestro Corps War, Blackest Night, to a slightly lesser degree Brightest Day, and War of the Lanterns – the last of which I found frankly incomprehensible) as well as a multiplicity of titles (in addition to the main title, there was also Green Lantern Corps and Green Lantern: Emerald Warriors), and therefore with the announcement of the “Reboot/Relaunch” – which would expand the franchise to four titles – I decided to bow out entirely and maybe pick up the trades. I will admit I kind of missed the ring-slinger, and so a few months ago when I decided to drop Wonder Woman I replaced it with GL with issue #11 or so. From the solicitation information it looks like that will be right after the end of a story arc. But at least for now I'm only getting the main GL title and will try not to get lured back into buying all the franchise titles.

As an example of the varying degree to which DC titles were a simple “Relaunch” as opposed to a “Reboot” last year, unlike, say, Superman, there was really very little perceptible change in the status quo for Green Lantern. The story takes up pretty much from before – when Hal Jordan was stripped of his power ring and it chose his long-time opponent Sinestro. Almost immediately the newest Green Lantern finds himself in opposition to his old yellow-ring Sinestro Corps. Whatever his personal feelings toward Hal, he recognizes Hal's skill and that he needs him as an ally. Hal, meanwhile, is on the rocks with his personal and civilian professional life – managing to piss off sometime girl-friend/boss Carol Ferris again even as she gives him another chance for the umpteenth time. Whereupon Sinestro appears and bestows upon Hal a new ring – of his own creation – recruiting him on a mission to destroy the Sinestro Corps, which, he claims, has “every single one … given in to [their] sadistic urges instead of adhering to the code of conduct [he – Sinestro] created,” turned against him, and enslaved Sinestro's home world of Korugar. A “code of conduct,” I might elaborate, based on the power of fear!

Hal jumps at the chance to wear a ring again and signs on immediately – No, not really – There's an issue of rather acrimonious give and take between the old enemies, but ultimately he does agree. Why? As Sinestro puts it, “Because even if you're incapable of it, you always try to do the right thing. And the right thing is to free my world and avoid the bloodbath that would happen if the rest of the Green Lantern Corps attempted to get involved. … Not to mention... … the ring is all you have.” Hal and Sinestro head to Korugar to face the Yellow Corps. Meanwhile, in a short aside, we see that the other Guardians of the Universe have basically emotionally lobotomized Ganthet – who proposes a new plan for “a Third Army.” The original Manhunters were the Guardians' first effort at enforcing law and order on the Universe; after the Manhunters went rogue, the Green Lanterns were the second. They consider the Lanterns to be just as dismal a failure. Hence, the “Third Army.” Not coincidentally, I'm sure, there is an upcoming Green Lantern “event” entitled so.

On Korugar, Hal completely in-character ignores Sinestro's orders and barges in to what looks like a bad end, disintegrated in the giant Yellow Power Battery that powers the Sinestro Corps. Except that's not what happens. It's actually a dimensional transporter that spits Hal back out rather than transporting him anywhere. He's captured and imprisoned in a cell that drains his ring energy. With a chance to manifest one last ring construct, he gets one last look at Carol before his image of her fades away and his ring goes dark. Sinestro is also overwhelmed and captured, tortured, and ultimately imprisoned – in a cell with a former ally from his days as the Green Lantern of Korugar. They carry on a spirited debate because she – as do the Korugarians – remember the dictatorial means by which he meant to impose law and order on the world. Hal overhears them, realizes Sinestro can hear him, and convinces Sinestro to create a hundred rings like his own for the Korugarians in the cell with him. This doesn't seem like such a hot plan when the Korugarians at once turn on Sinestro – but he and Hal manage to convince them to work together with themselves and they succeed in destroying the Sinestro Corps.

Then Sinestro sends Hal back to Earth, with his new ring as promised … but he didn't promise to give him any way to recharge it. Read the fine print, boy. This time, Hal seems reconciled to a new life without the ring. He and Carol even enjoy a renewed relationship – as Sinestro, in the midst of seeking and destroying the remnants of his old Yellow Corps, witnesses a vision of things to come and realizes that he still needs Hal's help. So it's back to Earth, interrupting Hal and Carol in bed with the ring zipping back onto his finger – “I can't get it off!” – “Because it is my will,” thunders Sinestro through the window. – “Find someone else to be your sidekick,” Hal spits back at him – “I'm done being Green Lantern.” – “No, Jordan. … Unfortunately, you are far from done.”

It's a good, fast-paced story, much like the early years of Geoff Johns' run resurrecting Hal Jordan as the Green Lantern of Earth. In fact, my main problem with it has absolutely nothing to do with this comic. It has everything to do with the fact that, a common writer notwithstanding, I see no possible way this story and especially the characterization of Hal Jordan here can be reconciled with the presentation of Hal in Geoff Johns' Justice League. It wouldn't be a problem if I were talking about differences between this Hal and the one in JL #1-6 – that initial arc of JL, after all, took place five years in the past. That would have been plenty of time for the over-the-top immature jerk we see there to have developed into the hero we see here. Sure, he's still hot-headed and impulsive here, but nothing like what comes across almost as a caricature there. But then with issue #7, Justice League jumps to the present – and Hal still seems like a bad, over-the-top caricature. And then there's the chronology. Hal as Green Lantern seems pretty much tied to Sinestro now – it's Sinestro's will that manifest's his ring and indeed powers it – but Sinestro's nowhere to be found in the pages of Justice League. And both stories come from the pen of Geoff Johns. – Huh? – Wha?!

But I don't want to end on such a sour note. As a Green Lantern story in and of itself, I found this volume very satisfying. I like Hal, I even like Sinestro – the mortal enemies as buddy-cops motif is quite entertaining at times – and I'm even interested to see where we're going from here. I'm certainly hoping, however, that there is minimal need to pick up the other Lantern titles in order to follow the upcoming “Third Army” story arc. I really have no desire to pick up the Red Lanterns title, and not much more desire to pick up whatever is the title of the “Multicolored Corps” series. I don't even have the motivation to look it's proper title up! But this was a good book.

Filling out this volume is also a gallery of alternate covers, sketches, and thumbnails of pencils for selected pages throughout the first six issues. Only the alternate covers are of any interest to me.