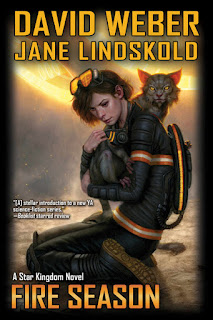 By David Weber and Jane Lindskold

This is the second in a “Young Adult” series of science-fiction novels set in Weber's wonderful “Honorverse,” the fictional universe in which his Honor Harrington series of space opera sagas are set. The heroine of these tales is Honor's several centuries' great grandmother Stephanie Harrington, who as a young girl first discovered the sentient race of “treecats” and forged the first ever bond between human and treecat, on the Manticoran Star Kingdom planet Sphinx. It's now a couple of Earth-years after the events of the first novel, but only turning from summer to autumn in the much longer year of that larger, heavy-gravity planet. From the inside flap:

“Fire weather . . . That's what the treecats call those rare seasons when the slightest spark can set aflame the vast green reaches they call home.

“Teen-aged Stephanie Harrington rapidly learns just how deadly those fires can be. Guided by her treecat companion, Lionheart, Stephanie and her good friend Karl Zivonik venture into the heart of a raging inferno to rescue twin treecats put at risk by human carelessness. Only the trio's absolute trust for each other stands between them and disaster.

“But Sphinx isn't the only thing ripe for burning. Stephanie has fallen hard for new arrival to Sphinx, Anders Whittaker. When Anders vanishes without a trace, Stephanie is at the forefront of the search. Then a lightning strike sets the Copperwall Mountains aflame and as a provisional ranger she is ordered to her post.

“Will Stephanie choose to honor the claims of her planet or those of her heart?”

For this second novel, Weber takes on a collaborator, frequent contributor to the various Honorverse anthologies Jane Lindskold. I have no idea what the division of labor was in this particular case, but I could detect no real difference in voice or style from the first book, A Beautiful Friendship, which Weber wrote alone. This is a very worthy sequel, smoothly continuing the saga of Stephanie Harrington and Lionheart (or, in the People's telepathic language, Death Fang's Bane and Climbs Quickly) and the ongoing adjustments that have to be made between two intelligent species now sharing a single world. As the jacket-blurb quoted above indicates, as Stephanie has matured from her early- to mid-teen years, she's experiencing all the normal changes that entails. That aspect of the story is handled very well; there's nothing here any parent would object to, which is indeed a consideration for me considering for whom I intend this book as a Christmas present.

Of course, I am myself a huge fan of Weber's Honorverse series (of which The Star Kingdom is actually the third, in addition to the aforementioned anthology collections of short stories), and will read anything in that setting. But, like A Beautiful Friendship, I specifically bought this book to give to my eleven-year-old niece, a voracious reader. I gave that first novel to her for her birthday this past summer, and was a bit dismayed to find at Thanksgiving that she hasn't read it yet. One of the unfortunate by-products of the Accelerated Reader programs that many schools use to encourage kids to read is that they become a bit mercenary in their reading, focussing only on books for which they can earn AR points. She wasn't aware that for A Beautiful Friendship, at least, an AR test exists, until I did a quick Internet search and confirmed it, whereupon her interest perked up. Hopefully she's read it by now and will be eager to continue the story. By giving her these kinds of books, I'm hoping to steer her away from the mainstream of teen “young adult” fiction that seems to prevail, that all seems to this old fuddy-duddy well past verging on the inappropriate, toward something of a higher quality than Twilight and all its ilk. And as she gets older she will have a whole “Honorverse” of a couple dozen more books (at present) waiting on her to explore.

Addendum: I must say I'm not very taken with the cover art here. The main problem is that Stephanie's head is about three sizes too small for her body. Other than that, it's not too bad, although the background, while colored as if to indicate fire, seems more like the exhaust ports of a space craft than one of the raging forest fires that are the major threat of the story.
Posted by Kent G. Hare at 13:18