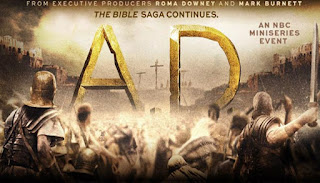 A.D.: The Bible Continues is, of course, billed as the even-longer sequel (of sorts) to the 2013 miniseries, The Bible, which aired as ten episodes on The History Channel. In reality, it is more properly a sequel, albeit with different actors, to the feature film that was adapted out of The Bible as Son of God (2014) [reviewed here: LINK]. That’s because its narrative would have to be inserted within that of The Bible while it follows directly from the conclusion of Son of God. But that’s really a minor distinction, except in the sense that it was an attempt to recapture the high ratings of The Bible on a weekly basis. Judging by the numbers reported in the Wikipedia articles [LINK and LINK], however, that didn’t really work out as hoped.

Our Monday evening Bible study group has watched and discussed every episode of A.D.: The Bible Continues for the past twelve weeks (finishing our discussion up tonight), using it to pace our reading of the first ten chapters of the Acts of the Apostles, which are the scriptures behind what was portrayed. The Biblical narrative is, however, wedded to an attempt at some larger historical context as well as a whoppingly big dose of imagination. Now that the series has concluded its original airing as of last night, I have some comments to make.


Like either of its prequels, this series ends up being a mixed bag of good and bad features.  Frankly, I would say the ratio is more skewed toward the latter, when all is said and done. Although on balance my viewing experience has been enjoyable, part of the “enjoyment” has sadly come from guffawing in near-hysterical laughter at their portrayal of some of the events and their increasingly mangled time-line. Ultimately I found it a much overblown and inferior retread of a task that was accomplished much more elegantly a generation ago in the 1985 TV miniseries also entitled A.D. [LINK], which is unfortunately available for purchase today only in a heavily “edited” (by approximately half) – in reality, butchered – form on DVD. More spectacular special effects and 21st-century storytelling sensibilities do not necessarily make a better portrayal of the events of the early Church against the larger backdrop of first-century imperial history. Carried over from The Bible into the latter-day version were such things as what we nicknamed two years ago the “Ninja Angels” as well as almost random race-bending of major characters, both of which I could live with if the overall story had been better than it was. Unfortunately, it was not. And once again, Pontius Pilate – in reality very likely a mid-level Roman military bureaucrat caught up in a politically impossible situation (admittedly, my rather sympathetic vision of Pilate is formed by Paul Maier’s excellent “documentary novel” biography) – comes off as an increasingly inhuman monster over the course of the series. This is despite what I considered to be a fairly good portrayal in the first episode, which retold the events of the Passion and Death of Christ. By the end, however, Pilate literally spits venom in his hatred for the Jews and Jerusalem as he contemplates his next move against them. (Of course, I’m deploying “literally” here in its contemporary idiomatic usage for emphasis while meaning the diametric opposite of its definition.) I found Caiaphas’ a much more balanced portrayal across the whole of the series. He seemed about as hapless as one would expect of a native but imperially-appointed (something the miniseries seemed oblivious to, at least last night) official of a people subject to Roman imperium.

In order to pad out what ended up being only the first ten chapters of the book of Acts (for twelve hours of viewing time, as opposed to 1,189 chapters – in the “abridged” Protestant Bible – for ten hours in the case The Bible), a great deal of what I call “expandaptation” had to be employed, based on increasingly unlikely speculation as to what might have been going on “between the scenes” of scripture. This included a good bit of bad soap opera when it came to the portrayal of Pontius Pilate’s and Caiaphas’ relationships with their respective wives, complete with an ongoing subplot of an unlikely flirtation between the Centurion Cornelius and Pilate’s wife Claudia that does not turn out the way she expects in one of the climactic scenes of the last episode.

Of course, as a historian, I was increasingly dismayed by the chronological chaos into which the series descended in the latter half with its major plot leading to the series climaxing with the attempted placement of the statue of the mad Emperor Caligula in the Temple. This is besides the ridiculous notion halfway through that the notoriously reclusive Emperor Tiberius would have left his refuge on the island of Capri and indeed Italy altogether to make a trip to the distant province of Judaea – but he did in this miniseries, in events helping to set up his assassination by his successor Caligula. The death of Tiberius and the accession of Caligula happened in AD 37. The incident of the Emperor’s statue – which did happen – occurred a few years later, in AD 40. But besides the fact that there was no real sense of the passage of seven to ten years (depending on whether the Crucifixion occurred in AD 30 or 33, the two most likely candidates) from the beginning of this series to the end, and even here at least three years from Caligula’s taking power to his ordering the statue erected as a rebuke to the Jews for their continuing unrest and resistance to Roman rule, the fact remains that we know that neither Pontius Pilate nor Caiaphas would have been around to try to negotiate the political powder keg that the order would create (only to be defused by the assassination of Caligula himself early in AD 41). They both were out of power – Pilate recalled to Rome, Caiaphas perhaps by death or at least replaced as High Priest – in AD 36. Except here they were both still present and conniving – and continue to be in the last scenes of the last episode. There were plenty of other such time-line discrepancies that I noticed as time passed, including telling a number of scenes from the Bible out of sequence, but this was the one that I continually railed against because it was so monumental.

Were there good parts of A.D.: The Bible Continues? Yes, as I indicated above although I went on to dwell on the negatives. As far as those good parts go, speaking only for myself at least, I would point to the portrayal of the Apostle Peter (most of the time – early on, his indecision and self-doubt were played rather heavily). In the end, I would also mention the portrayal of Paul, whose portrayal overcame what I found to be a really odd speech cadence that almost at times seemed to rise from a slight speech impediment with a hint of a lisp, but who went almost instantaneously from being an over-the-top “villain you love to hate” to that same over-the-top enthusiasm making him almost believable as the Apostle-come-lately who did more than any other figure to spread the gospel to the ends of the known world of the first-century Roman Empire. Finally, and far more abstractly, there was the fact that in spirit, at least, the events of the book of Acts covering the first half-dozen or so years of the life of the Church were played utterly if bombastically straightforwardly and in an unabashedly positive light that may well, God willing, inspire someone to read the original for themselves. As Fr. Bill Byrne in his Youtube series, A Catholic Take on A.D.: The Bible Continues, ended every two-minute installment: “The Book is always better!” [LINK]

And then, this: The final episode ended with a cliffhanger! As I half expected all along once I learned that this series would cover only chapters one through ten of the 28 in Acts, the producers are at the least leaving it open for a sequel, obviously focusing more on the wide-ranging evangelization of the Apostle Paul whereas this series centered largely on Peter in and around Jerusalem. Although I’ve seen no such announcement, I fully expect to be sitting here, God willing, watching Paul chew up the scenery in “A.D.: Son of the Bible Continues” a couple of years hence. But can I really take another twelve hours of this?


In preparing our weekly study of the Acts of the Apostles following along with our viewing of A.D.: The Bible Continues, I made up study sheets, both as handouts for the group at large and a “leader’s copy” with “answers” to the various questions that I posed for the various passages of scripture. Although the nature of these evolved over the course of the series and I have not (and probably will not, since the series is over and done with) gone back and incorporated ideas that I used in the later weeks to the earlier sheets, I’ve decided to make these all available via a link to the folder in my Google Drive. Use them as you see fit, although I make no guarantee how long the link will remain active or that the documents will remain available. [LINK]
Posted by Kent G. Hare at 16:15