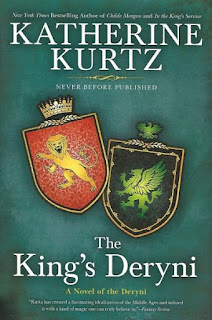 And this is the latest-published in the venerable series, the sixteenth novel, the one which a couple of months ago I discovered had been published just before the end of last year, the prospect of reading which launched me onto the deepest re-entry into the quasi-medieval fantasy world created by Katherine Kurtz that I have experienced in thirty years or more. Recently previous posts [LINK and LINK] have detailed my rereading of the now-forty-years-old “opening” trilogy, the “Chronicles of the Deryni,” and my reactions thereto; now it’s time to discuss this most recent offering.

First off, to put it into its proper context, The King’s Derni is the concluding volume of the Childe Morgan Trilogy which stands as prequel to that aforementioned “opening” threesome – and as George Lucas discovered, accomplishing such a task is fraught with difficulties. It’s not that Kurtz had not delved into the past of her first-published writings before – she did just that, of course, immediately after concluding Chronicles with High Deryni. Her fourth-published book, Camber of Culdi, jumped back in time two hundred years, to flesh out the “decanonized” patron saint of the magical Deryni race and open a second trilogy telling how King Kelson’s Haldane ancestors had come back to the throne of their fathers and the Deryni had become a hunted, persecuted minority within the kingdom of Gwynedd. But with a purported interval of two centuries between them, the inevitable little inconsistencies that emerged on close readings of The Legends of Camber of Culdi (set ca. 900) and The Chronicles of the Deryni (set ca. 1120) were easy to dismiss or explain away as the inevitable dimming of memories across generations. In this case, with the Childe Morgan Trilogy centered on the heritage and childhood of one of the main characters of The Chronicles of the Deryni, with The King’s Deryni concluding barely more than a dozen years before Deryni Rising, what seem like much larger inconsistencies – of fact, of tone – are much more difficult to overlook or reconcile. Much like the somewhat-shy-of-twenty years narrative gap between the conclusion of Star Wars Episode III: Revenge of the Sith (2005) and the opening of Episode IV: A New Hope (1977), there is an insurmountable sense of difference between the worlds that were portrayed in the earlier-released albeit “later” stories and the later-released purportedly “earlier” stories. They do not dovetail from one to the other smoothly at all. Of course, how could one expect them to? Like Lucas setting out to tell his “immediately-prequel trilogy” twenty years after the fact, Kurtz attempting to do the same thing thirty years later did indeed have a much more developed, richer conception in her own mind of what the world of the Eleven Kingdoms looked like. She had, moreover, in the four novels which follow, story-wise, High Deryni, introduced dozens (at least) of new characters who begged for backstories to be told here – but bringing up the question of where they were during the course of the original stories. Finally, Kurtz’s fertile and character-driven imagination being what it is, there are scores (? – an unlikely number, at least) of seemingly important characters – brothers, sisters, cousins, friends, rivals, adversaries, and enemies of the main characters – who are introduced here only to be absent from the “later” stories. The disconnects that result are, of course, inevitable and unavoidable if Kurtz is to give free rein to her imagination, but at the same time frustrating.

Kurtz also, with this book, was telling an overall story which included along the way incidents that she had previously, thirty to forty years ago, related in various short stories – sometimes from a considerably different viewpoint (e.g., “The Priesting of Arilan” from the collection, The Deryni Archives, 1986), sometimes not (e.g., “Swords against the Marluk” from the anthology, Flashing Swords! vol. 4, 1977). Not having read either of those short stories in probably thirty years, I cannot say how well she maintained consistency, but my dim memories of the latter story did not impart in me any sense of déja vù as if I already knew what was going to happen.

A major plot element in the original novel, Deryni Rising, had been the irrational antipathy harbored by Kelson’s mother, Queen Jehana, toward the Deryni in general and Alaric Morgan in particular. A bit more information regarding the history between Alaric and Jehana was worked into the second book, Deryni Checkmate. Basically, I had from these books the impression that Jehana’s discovery that Morgan was Deryni was sudden, dramatic, and shocking to her. That is not the case in this book, however. Much of the overall narrative of the Childe Morgan Trilogy is predicated on general knowledge at the court of Gwynedd that young Alaric is Deryni and indeed that the Deryni in general are, however out of favor and even persecuted, not nearly so underground, so to speak, as they seem in the original novels. Here, Jehana knew and was first uncomfortable around the boy from the very beginning, her discomfort slowly developing once she arrives at court as queen until, when she learns of his role in the Duel Arcane between King Brion and the Marluk – basically, unlocking the quasi-Deryni Haldane royal powers to give him a fighting chance against a fully-trained Deryni – it blazes forth into outright hatred. 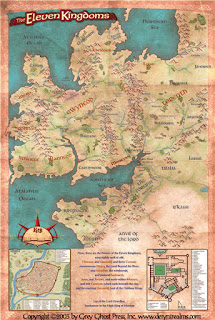 In one respect, Kurtz’s long decades developing the world in which she set these stories gets its fullest display in this novel. It is a big, sprawling story, not just narratively but geographically. Over the course of its 550 pages we are taken literally to every corner of the Eleven Kingdoms – from Gwynedd, of course, eastward to Corwyn; southward to Orsal, the Forcinn Border States, to Fianna, Fallon, and Bremagne; northwestward to Meara; northward to Marley and Rhendall; even eastward into Torenth and Arkady. We see more of the different regions and kingdoms making up this alternate version of northwestern Europe than in any other single book; at times, it reads more like a bloody travelogue!, as if Kurtz wanted to be sure to revisit all of her old friends at least this one last time. I have no problem with that – she has created an alluring world, part of its attraction being the great variety and verisimilitude of the diverse locales. But along with that, unfortunately, came no little frustration. A map is indeed included, Thank heavens!, but it is the same old map that has been, I guess, the standard map of the Eleven Kingdoms for at least a decade now, the same one that was available as a magnificent poster from Grey Ghost Press, with wonderful insets of the royal city of Rhemuth and its Cathedral of St. George. Unfortunately, for all that it is a reduced black-and-white print of the colored original, neither includes a lot of essential detail, especially with respect to this particular story. To give one example, a major side-story involves an expedition into the east, into Gwynedd’s primary political and dynastic rival Torenth. The specific destination is the Duchy of Arkady – which does not appear on this map. Nor does Cardosa, the border city whence the expedition departs; nor does Cynfyn where the company had assembled along the way after first leaving Rhemuth. Cardosa and Cynfyn are indeed critical locales in other sections of the book – but the reader is left adrift as to where exactly they would be situated on the map.

Thus far this has been a nitpickingly negative review, and the reader would be well justified in thinking that I really did not enjoy this book. That is not true. I enjoyed it a great deal. But, kind of like I expected, my enjoyment is mainly one of revisiting old friends from decades ago in a place where I spent so much time ‘way back then that it seems almost like coming home. It was not the excitement of discovering new friends and new places. And, the sad fact is, I do not think that this book on its own would hold much attraction for someone not already enamored of the world of the Deryni. Sure, a new reader coming to it would not find the frustrations that I described above, but neither would they find, I think, much to carry them into other books in the series. In fact, if they are perceptive enough to know that the logical book to follow this one up with would be Deryni Rising, with its sadly clumsy and underdeveloped “first novel” writing style, I doubt they would have much if any inclination to discover how Kurtz’s story-telling ability did develop from there to its height, in my opinion (and as I remember it), during the subsequent Legends of Camber years. Katherine Kurtz has performed a great service for her old fans such as myself, and I thank her for that as well as look forward to whatever she next serves us (please don’t let it be another eight years!), but I just cannot believe she has won herself any new fans with this book.