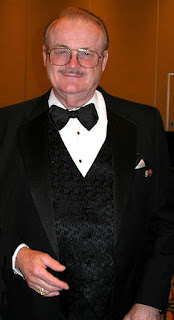 Just before I turned out my light last night, as I glanced at the blogroll on my personal/private page, I saw the sad news – first from The American Catholic, and immediately below it, from his own page, The View from Chaos Manor – “Jerry Pournelle is dead” [LINK].


I immediately sent up a prayer for the repose of his soul, and mulled over his passing through the subsequent day, and decided that, although I have let my own blog go pretty much moribund this year, I could not allow the day to pass without writing my own short tribute to the man. There are many others appearing across the web, of course [and there is a good general overview of his life and career at Wikipedia [LINK]), but he was one of my all-time favorite authors, and in the last decade came to be one of my most respected sources for political, scientific, and social commentary.


I previously [LINK] reviewed a rereading of one of his collections of popular science articles, A Step Farther Out, in which I briefly reviewed my own history with Pournelle as an author. To repeat, as I remember it, I first encountered him when I would have been in late elementary, maybe early junior high, when I read his novelization of the movie, Escape from the Planet of the Apes. I’m not sure, to tell you the truth, whether when, a few years later, in high school, I obtained and read his and collaborator Larry Niven’s great novel of first alien contact, The Mote in God’s Eye, I really realized that it was the same author. Maybe, maybe not. But around that time I do remember starting to find and read both his writings in science fact and science fiction. And, for a long time, he remained just that to me, mainly a favorite science-fiction author who also wrote about science, kind of like Isaac Asimov.


Then, about ten years or so ago, I discovered his aforementioned blog (he did not like that word) and learned that there was much more to Dr. Pournelle than that. He became my go-to source for reasoned commentary on major issues of the day – as I indicated above, political and social in addition to scientific, with especial perspicuity where those intersect, such as in the ongoing debate over “Global Warming/Climate Change.” That was interspersed with an ongoing record of his daily activities. Keeping a journal myself, I’ve always found others’ such writings fascinating, and have read a number of published journals, but this was a rare opportunity to share in someone else’s contemporary narrative. I followed him from that time on – through his battle with and recovery from a brain tumor, the decline and ultimate passing of his beloved dog Sable, his wife’s health issues as well as his own – a stroke a couple of years ago that left the maintenance of his page a laborious chore that he doggedly continued – and so forth. I’m doubtless forgetting a lot. Presumptuous though it might be, I thought of him as a friend.

The note from his son on Chaos Manor [LINK] reported the matter briefly last evening: "I’m afraid that Jerry passed away[.] We had a great time at DragonCon[.] He did not suffer." His own last entry was the evening before, Thursday 07 September, a short commentary on the current political furor over Trump's handling of the "Dreamers," with his usual ruminations as to what would be a reasonable solution – but also a report that he had come back from DragonCon last weekend with "the flu," followed by an abrupt end that he was retiring for the night as he was "experiencing a wave of nausea. Bye for now." The Wikipedia bio says that he passed away in his sleep.

I never actually met him, unfortunately. The closest I came was, a few years ago, at one of the Comicpalooza Conventions in Houston, where I had the pleasure of meeting and chatting with Larry Niven for a few minutes, having him sign a couple of books and asking him to pass on to Jerry my regards and thanks for the years of pleasure his writings had provided me. That would have been about 2012, I think. A year or so later, I did correspond directly with him via email and get to tell him that directly when he responded to my inquiry as to his thoughts regarding the Mars One initiative which led to a short exchange which basically revealed he and I were pretty much in agreement, that we are not really there yet, that such a step is, as I would put it, a bit too much of an initial “step farther out.” The moon should come first, much closer to home, for the inevitable trial-and-error learning process and a much better chance to overcome challenges that will arise, some of which we probably still cannot even envision – until they arise. The problems are “just” engineering and the need to gain experience, but it is a process that needs to be worked through, not jumping right into the deep end essentially without a life preserver. As I responded to him in what may have been our last communication, “The romantic in me wishes Mars One all the luck in the world, but the realist fears the consequences of what I feel is a very probable spectacular failure with loss of life that will devastate our collective will to pursue such endeavors.” As time passes, I continue to grow more pessimistic regarding “our collective will” as a nation and as a species in that area … but I constantly remind myself of one of his most oft-repeated admonitions, “Despair is a sin.”


Which brings me to the last facet of Jerry Pournelle that I was gratified to gather when I discovered and started following his daily activities and commentaries – he was Catholic. It’s not something he wore on his sleeve or ever made explicit reference to, but there were the matter-of-fact references to attending Mass, his wife’s membership in the choir, and so forth, that simply were part of who he was. I therefore have reasonable confidence that, God willing I make it to heaven, I will ultimately be able to meet him there.