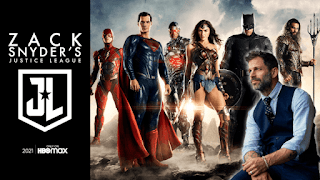 Well, I just finished watching all four hours of Zack Snyder’s Justice League. It is awesome. It makes the version that Joss Whedon butchered for the theatrical release several years ago compare like Andrew Lloyd Webber against Richard Wagner. Or like Miller Lite vs. Guinness. It is so easy to see all the Marvelesque Avengers crap that Whedon brought into what we got, whether that's really all attributable to him rather than Warner Brothers that lost faith in their own vision is debatable – and the loss of so much depth that resulted from that plus cutting the movie down to two hours. Snappy dialogue and cheap humor is not everything. It's absence here was so appreciated. [See more below]

Maybe I shouldn’t have been, but I was a bit surprised that the basic structure is so much the same – somehow Superman’s death at the end of Dawn of Justice activated the Mother Boxes, which called Steppenwolf to try to bring them together to somehow subjugate the Earth for Darkseid; Batman atoning for what he did in Dawn of Justice by bringing the heroes together – and realizing they need Superman. So, using the Mother Box in their possession they bring him back, which leads to a final confrontation in Russia and Steppenwolf being driven back. But so much was done so differently. Sometimes even the same scene was revealed to be something totally different (e.g., Martha and Lois in Lois’ apartment … except here it was not Martha).

It’s not perfect, of course. The Martian Manhunter’s cameos , for instance … if he’s there, and knows about Darkseid, why is he not already in contact with Bruce and working with him to bring the heroes together? I would think he would be. But all in all, this is such an improvement. It’s like The Lord of the Rings compared to Game of Thrones. Yes, I went there.

Unfortunately, in restoring Snyder’s original vision for this movie, it restores that original vision’s nature as not the end of the story. There is virtually no chance of the sequels he set in place (Darkseid’s second coming to Earth, the Injustice Society, etc.) ever being seen, at least in film form. Hopefully they will finish it out in some form – graphic novel, maybe?

All in all, I really enjoyed this movie.

Addendum on Joss Whedon: I have been a fan of Whedon's in the past; I liked Buffy the Vampire Slayer and Angel. I loved Firefly and Serenity. And I really liked Avengers -- the first one he did, not the second one. It was actually with the latter, Age of Ultron, that I started to perceive just how much most of Whedon's work depends on "snappy dialogue and cheap humor" as well as the illusion of depth rather than any real depth (something that, in my opinion, pervades the Marvel movies [again, see below]. I have not gone back and rewatched Buffy or Angel; I have (just recently) rewatched Firefly and Serenity and find that those do (in my opinion) have both. They hold up well and I'm sure I will watch -- and enjoy -- them again in the future. But, sometime after Serenity, in my opinion, something changed. It's probably what so often happens -- he started to believe he could do no wrong, and that never works out well. I could say more, especially about the allegations that a host of former associates have made in the past few months, but I won't. This post is not about Joss Whedon, except that where Ultron lessened my regard for him as a movie-maker, the Justice League theatrical cut destroyed it, and seeing Snyder's original vision of that latter movie (and I am sure that it is that) simply confirms that for me.

Addendum on the Marvel movies: First, a couple of admissions. 1) I have enjoyed most of the Marvel movies. But 2) I have always been more a DC fan than a Marvel fan., comics as well as movies. Part of it is that I have less regard for something that others think is key to the Marvel universe (from the beginning). DC has always seemed so much larger than life, less grounded in reality -- the best word is mythic -- while Marvel's schtick has always been a "false" "realism," a conceit that those stories were happening in a world just like ours, i.e., New York City rather than "Metropolis" or "Gotham City." But, of course, the Marvel universe -- comics or movies -- is not the "real world." It's just a pretense that ultimately, for me, distracts. And often the attempts at "depth" break down really quickly with a little thought. Suspension of disbelief is one thing. Thinking that, somehow, Thanos's motivation had "depth" goes beyond suspension of disbelief to suspension of basic intelligence. All it amounted to was ill-thought-out Malthusianism that would have, at most, bought a little time, delaying the "inevitable" Malthusian crisis that he claimed to be averting (not in so many words, of course ... the word "Malthusian" is not "snappy"). Darkseid's motivation, however -- pure, unadulterated power, the desire to control everything. To put it in Biblical terms, the desire to replace God. It's the oldest motivation in the book, that of Satan himself. People think the DC movies -- Zack Snyder's, in particular -- are style over substance? Avengers: Infinity War and Endgame are both exactly that -- style and superficiality pretending to be substance ... and ultimately falling flat. Snyder's DC movies, on the other hand, are -- to use the term again because none other fits -- mythic.

All of which is just, of course, my opinion.