“Grounded, Part Eleven”
Oh my. And I mean this in a totally different way than I did at the beginning of my previous post. There it was good. Here, not so much.
Since I get my comics pretty much all at once in a shipment at the end of the month due to the lack of a local comic shop in the town where I live (and the regular almost weekly trips to my home town a hundred miles away where there is one are not a normal occurrence), I am always behind most of fandom in reading each month's adventures. I generally try to avoid reviews and spoilers for what I'm going to be reading, but sometimes the hue and cry on the 'net is so raucous it's unavoidable. As it was this time. I'd heard that this issue is pretty bad. I'd heard right.
Actually, as a reaffirmation of the need and value of Superman in today's world it's not so bad, except in its execution, mainly in the total mischaracterization of the hero that makes that reaffirmation necessary. What's worse is how out of nowhere it comes, given the major redirection that Chris Roberson had brought about in the story arc since he had J. M. Straczynski's plot and outlines to run “Grounded” given to him about halfway through. And making it even worse is how obviously we are missing part of the story. Remember that there was controversy surrounding the previous issue, how a solicited story that apparently had as a plot point a Muslim super-hero was replaced at the last minute by a file story about Krypto set several years in the past. Well, whatever happened in that untold chapter must have affected Clark deeply, because at the beginning of this story he announces to a dumbstruck Connor and Kara that he's throwing in the towel, abandoning the Superman identity in favor of returning to a life of secrecy, helping people and doing his heroic deeds in anonymity – to put things inevitably in Smallville terms, going back to being “The Blur.” And he all but commands Superboy and Supergirl to do the same – as he changes clothes right in front of them. 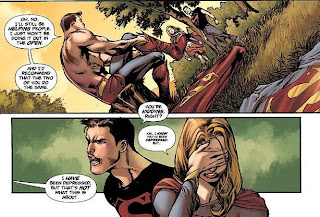 (There's been much made of Kara's "facepalm" at the bottom of page three – which would be an appropriate reaction, to be sure – but I'm not sure that's what we're seeing. For one thing, I do a facepalm with the palm to my forehead and fingers pointing up – and a bit more forcefully. Second, look at the overall context: I think she's covering her eyes because Cousin Kal has stripped down to his tighty-whiteys right in front of his teen-age girl cousin … Waitaminute – Superman wears his underwear on the outside, right? (For now, at least!) – Oh, my! – No wonder Kara's demurely shielding her eyes!)
Anyway, Clark goes off morosely to a coffee shop in Portland, Oregon, where he begins work on an article, “Must There Be a Superman?” on his laptop. 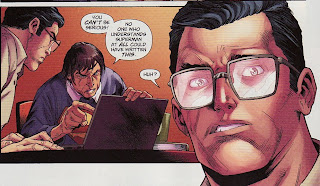 A fellow patron sees what he's up to and the rest of the issue is that patron basically trying to convince him that he's wrong – finding person after person to counter Clark's whining that “People are scared of Superman”; “People are envious of his powers;” “People don't trust Superman”; and so forth – until the last couple of pages where they see a news story of the mysterious New-Kryptonite-powered woman who's been stalking Superman now holding Lois captive in Seattle and threatening to kill her if he doesn't come to her. WHOOSH. “To be concluded...” 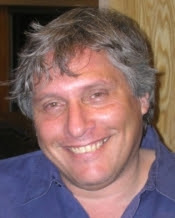 The most interesting thing about all that is that the coffee-shop patron who's arguing with him is, according to the internet consensus although he's not named as such in-story, none other than Bronze-Age Superman writer Elliot S! Maggin (no, that's not a typo), writer of a story entitled … “Must There Be a Superman?” (Superman #247, Jan 1972).
Anyway, when I saw the furor raised by this issue a month or so ago, I couldn't resist peeking at Anj's review on Supergirl Comic Box Commentary, and here was my comment at that time: “I haven't read the issue, being on a monthly mail order service, but based on your description my gut reaction is that this HAS to be an issue more heavily 'plotted' by JMS and mandated as 'crucial' to the 'Grounded' story arc. I bet the next is the same and that pre-Flashpoint Superman will go out with a whimper rather than a bang.” My basic assessment hasn't changed. What a shame. Chris Roberson should have insisted that his work on this issue be attributed to “Justin Thyme.”  (By the way, it was that comment-thread that clued me in that Coffee-Shop Guy was meant to be Maggin.  I suspected it was someone, but had forgotten about that forty-years-gone story and didn't make the connection.)
I do hope I'm wrong about next issue, however. (If it's out, I've managed to avoid seeing any spoilers.)
Posted by Kent G. Hare at 19:43