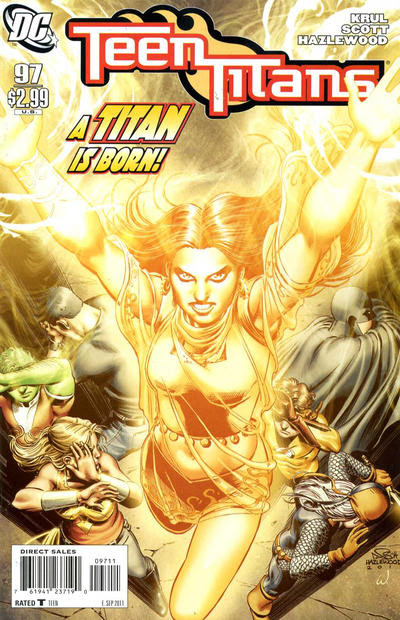 “A Call to Arms”
The multi-part story of the Titans vs. demons straight out of Hindu mythology comes to its end in an issue that I enjoyed a bit more than the ones leading up to it. I can't say exactly why other than it seemed more straight-forward. Most of the issue is a straight-up fight that culminates, as it kind of has to, with the new hero Solstice saving the day. I mean, it seems like this story was basically about introducing this new character into the book. Too bad she's coming in just in time to be wiped away after next month.
Along the way we do get some good character moments, such as between Connor and Rose, between Gar and Raven – and the latter's seeming betrayal of their new teammate with whom she seems to have had some kind of problem from the beginning. Raven swears she didn't intentionally leave her behind when “portalling” the others back into the real world – but the only one who overtly accepts her word is Tim. I'm pretty sure we won't get to see this stuff play out, though.
“Next Issue... The Titanic Return of Superboy-Prime.” Sigh. Not him again. One benefit (hopefully) of the Relaunch that's coming up is that maybe we can be done with this guy. Since his “turn to the dark side” in Infinite Crisis he has had few appearances that I haven't found annoying as all get out. He was okay as the Big Bad in Final Crisis: Legion of Three Worlds, and his appearance in the two-part Adventure Comics end of Blackest Night had its moments, but other than that.... I wonder if the ending of that Blackest Night story will even be taken into account here.

“Eclipso Rising, Part Six”
Blue Lantern Saint Walker, empowered by his proximity to Alan Scott Green Lantern and Mikaal Tomas Starman, is able to go beyond showing Eclipso his heart's desire to make him believe he has actually attained it. Such as killing Donna Troy. That's right – her death at the end of last issue didn't really happen except in Eclipso's mind. Where it's just the beginning of his ultimate conquest of the universe and the eradication of all life so that only himself – and Bruce Gordon's mind – are left. Really, it's all to keep him distracted by his “success” as Donna keeps whaling at him, and the others continue to fight, as Atom and Starman fight to free The Shade from Eclipso's control. When they succeed in that, it likewise breaks his control of all the others, bringing Alan and Jade and all the rest back into the fray on the side of light. When the light fades, Bruce Gordon is left in his own native form.
But the crisis is only half-averted – the moon must now be put back together before the effects of its shattering wreak irrecoverable harm to the Earth. Supergirl – absent for most of this arc, shows up just in time to help out (a note places this after the “Reign of the Doomsdays” story going on in Action Comics) and the deed is accomplished. The adventure ends on a high note, with the Atom Ray Palmer essentially giving his blessing (as an old-time member of the “classic” Justice League) to this most recent, sometimes dismissed as “B-list,” Justice League….
… a high note that falls flat when you turn the page and see that, five weeks later, Dick Grayson Batman is formally adjourning, “[f]or us, for our version anyway … the last ever meeting of the JUSTICE LEAGUE OF AMERICA.” “Well, I must say this is a surprise,” Bill the Congorilla speaks for us all. That something has happened to bring this sudden decline in fortunes about is obvious, not just from the passage of time, but from whatever injury Starman has suffered to put his arm in a sling. He seems okay the just previous page. “... To Be Concluded.”
I do wonder if we'll find out in the next – the last – issue of this run of Justice League of America. Without looking the solicitation up, from what I remember it's some kind of “crisis of confidence” issue, but is it the events leading up to Batman's statement, or the fallout? I've read “rumblings” on the internet, while avoiding any outright spoilers, that there's a good bit of metatextual commentary in that last issue by James Robinson on the difficult conditions that have been imposed on all the writers of this run from the beginning. Rather than being the center, the flagship, of the DC Universe as it arguably ought to be, too often the writers have had to accommodate their stories to whatever other big events were going on, with characters being jerked out of their title with little notice, with the League itself seemingly being jerked all around, to the detriment of any writer really being able to develop any kind of story momentum. Perhaps most famously, a couple of years ago his public complaining about that is what led to the late, great Dwayne McDuffie being sacked from this book. One would think that a writer of Robinson's stature would have been able to control his own book's destiny rather than having all those other tails wagging the big dog back and forth, but especially in the early part of his run it sure didn't seem to be so. Heck, even in this arc, witness Supergirl's absence and her explicit statement that she had to be elsewhere – in Action Comics. Really, trying to coordinate “continuity” at that level, where characters are pulled here, there, and yonder and interfering with good stories elsewhere, is just ridiculous. Apparently Robinson has some choice, albeit veiled, words on the subject. I am so looking forward to seeing just what people are talking about here.
Posted by Kent G. Hare at 18:59