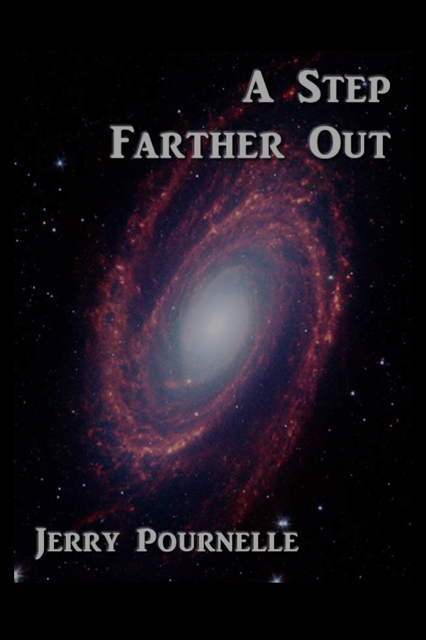 This is actually a somewhat annotated and updated reissuing of a book I remember reading many, many years ago, but thoroughly enjoyed revisiting. After at least thirty, probably closer to 35 years – it was first published in book form in 1979 according to the copyright page, and it is furthermore an edited compilation of monthly columns Pournelle initially presented in the pages of Galaxy magazine as early as 1974 – I had few specific memories of much of it. My clearest recollections, in fact, are of the section on “Building The Mote in God's Eye,” which novel I remember reading in high school (so, late 1970s), probably the second book by Jerry Pournelle (actually co-written with Larry Niven) (the first had been the novelization of Escape from the Planet of the Apes a few years earlier) that I read and the one that made me a life-long fan of his writings. I actually had the glow-in-the-dark "UFO" reissue of the plastic space-ship model Leif Ericson that Pournelle describes using as a template for designing the I.N.S.S. MacArthur, and I remember holding it and rereading parts of Mote with that visualization in mind.


Besides the account of the complex world-building that went into creating the setting for that great novel, which led me to the various other books set in Pournelle's “CoDominion Universe,” and which account this wannabe writer found fascinating and inspiring (my efforts, unfortunately, never ever got much beyond the world-building stage, although I do still have a fairly thick bound typescript prose outline for a hugely sprawling intergalactic “starsaga” as I called it. It's pretty cringe-worthy when I go back and read it now...), A Step Farther Out covers a wide range of topics organized in six broad sections: 1) “Survival With Style”; 2) “Stepping Farther Out” (which includes the aforementioned Mote material); 3) “A Step Farther In: Black Holes”; 4) “Space Travel”; 5) “A Generation of Wonder”; and 6) “The Energy Crisis.” Throughout, Pournelle's practice for this 2011 edition is to present the original 1979 text supplemented with considerable commentary where made necessary by advances in science and changes in society. Surprisingly, nigh on four decades have not made nearly the differences that one would have hoped, and, sadly, we seem to actually have taken “A Step Farther Back” [my words, not his] from the hopeful future that Pournelle lays out as just one possibility in his concluding essay, “Some Futures.” Unfortunately – and I think he is dead on correct here – the alternative to his hopeful future is truly depressing to contemplate. Although Pournelle's commentary largely lets his older work speak for itself regarding the implications of not taking that that “Step Farther Out,” and assures us periodically in his blog, The View from Chaos Manor (see my blog roll at right) that “despair is a sin,” the bitter frustration with then-President Jimmy Carter's deplorable lack of vision with regard to basic science which runs through these pages as probably their most dated element (? – or perhaps not – just change the names...) surely has to have blossomed into something verging on that sin in the past few years, when Jimmy Carter has become – at least for me – only the second-worst President ever in that (and every other) regard.

At one point in my reading of this book I had to set it aside and pour out my thoughts into a short essay of a paragraph or so that I think pretty succinctly sums up the conundrum that Pournelle lays out, in which our civilization finds itself – and we are the greater part of half a century behind where we might have been, that much closer to reaching a point of no return. Here are those thoughts, somewhat edited and fleshed out:

The environmentalist movement which has done so much to hold us back is right about one thing, an inescapable fact. Natural resources on this Earth are limited, and they will run out one day. Whether that day comes sooner or later, it will be sooner than we would like. But notice the key phrase with which I qualify that assertion: “on this Earth.” Space is, on the contrary, for all intents and purposes infinite. And in that practical infinity there is likewise a practical infinity of natural resources. If we wait until our Earthly resources are depleted, it will be too late to turn our eyes toward the stars. They will then be beyond our reach. We will have no way to get there. The time to reach out into space is now, while we are able. Once the window of opportunity closes with the depletion of our Earthly resources [in 1979, Pournelle estimated that window of opportunity to be closing in about a century; we're a third or more of the way there right now], if we have remained confined to this Earth we will stand no chance and have no future. Technological civilization will literally starve. Society will collapse. Doom will be inevitable, whether self-inflicted in a global conflagration born of desperate competition for the remaining crumbs of resources, from some Earthly natural disaster such as a supervolcano, or most ironically, from above – from the very frontier upon which we turned our backs – in the form of an asteroid, a comet, a solar flare, or a supernova. Humanity is, as a species, currently in a predicament much akin to a group alone in a leaky lifeboat. Once “Spaceship Earth” is gone, if we have not reached some safe haven, we will die.

Even before that point, as Pournelle says repeatedly, “Our grandchildren may curse our memories.” When I was a child, even as a young adult, I believed I would live long enough to be part of a truly space-faring, interplanetary civilization. I no longer believe that. I wonder if my son will. And I wonder if his (hypothetical) children – my (hypothetical) grandchildren – will even have a chance – or if they will indeed “curse our memories.”

There is nothing “Cheery” about that … but Thanks for reading.
Posted by Kent G. Hare at 17:29