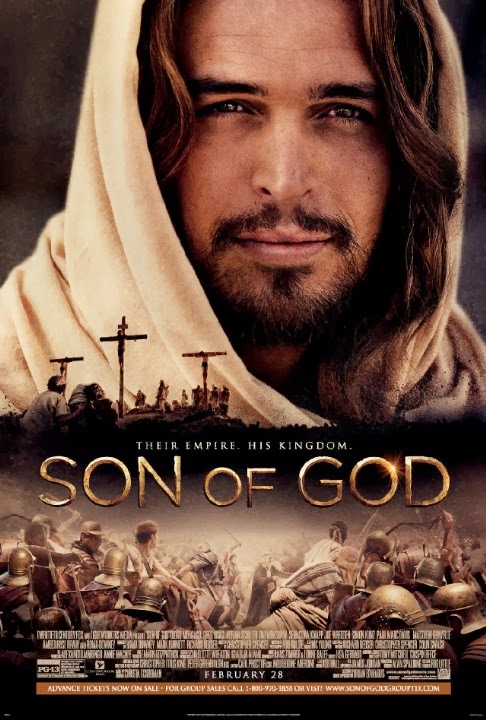 Anne and I went to the 16:00 showing of Son of God, this year's recut theatrical release of just the Christ story from last year's television miniseries The Bible, overseen by Roma Downey and her husband. A year on down the road from that, I didn't perceive most of the extra footage that was added, although there was quite a bit (and some noticeable excisions). It had the same strengths (a very charismatic Christ and high production values, especially for a "mere" $30 million, although I do have to wonder exactly how that figure was accounted given the considerable production overlap with The Bible) and weaknesses (a superficial script that seemed to miss the point of a lot of the scenes, and mangle many more, as well as the basic chronology) that the miniseries did.  Among the weaknesses I would put the artificial and intrusive multiculturalism that plagued the miniseries (“Black Samson” – sounds like a great super-hero name! – and yes he was shown in one of the cursory scenes at the beginning illustrating a monologue telling how the Word was active throughout history; in the Christ story proper, I'm pretty sure one of the apostles was black, and certainly Simon of Cyrene). There also seemed to be too much effort to paint the Romans, especially Pilate, as inhuman monsters, and virtually absolve the Jewish leadership from their role in the events, which I figure was probably a reaction against the criticism that The Passion of the Christ was subjected to a decade ago. I almost feel a need to reread Paul Maier's Pontius Pilate again as an antidote! [link] Of course, the media firestorm that The Bible itself elicited last year, when its Satan was a close lookalike for Barack Obama, resulted in all those scenes being cut. One thing I hadn't been aware of until the closing credits here was that the excellent musical score was by Hans Zimmer, whom I mainly know from the Dark Knight trilogy as well as Man of Steel. (Mysteriously, although I saw it on-screen, IMDB does not reflect his contribution, listing instead one Lorne Balfe; the IMDB credits for "The Passion" segment of The Bible, however, do list Zimmer along with Balfe).  Overall, I enjoyed the whole experience again despite my criticisms, but this film comes nowhere near displacing my gold standard depiction of the Christ story, which continues to be the brilliant 1970s TV miniseries Jesus of Nazareth, by Franco Zeffirelli.  My mental image of much of the Christ story continues to be informed by that – besides Robert Powell's awesome portrayal of Jesus Himself, Nicodemus will for me always and forever look like Laurence Olivier!