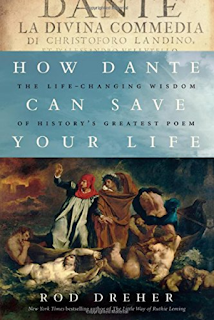 I’m not a big fan of self-help books. To be fair, of course, there’s nothing wrong with them, and I’m sure they help a lot of people. But none of them, however valuable they look like they might be, ever hold my attention long enough for me to get anything of worth out of them. This book is not, strictly speaking, a “self-help book,” but the extended title rightly hints that it does share a lot in common with that genre, taking the novel approach of describing how a 700-year-old medieval Italian poem helped modern conservative commentator Rod Dreher to put his life back on track after what I would term (he does not) a nervous breakdown, a total emotional meltdown that was wrecking even his physical health, which readers of the quasi-prequel memoir, The Little Way of Ruthie Leming, would not have expected as imminent.

You do not have to have read Ruthie Leming before taking up How Dante Can Save Your Life, but even though, as described in my review of the former book [LINK], I first really learned about it – and Rod Dreher himself – in the context of an interview about the latter book, I am glad I did. The essence of Ruthie Leming is related in the first few pages of Dante, but useful depth and context to the story is necessarily lacking when reviewed merely as background.

In a nutshell, even as Rod Dreher was engaged in the requisite promotional tour for the tale of his sister’s life and her losing battle with cancer, and the spiritual lessons to be drawn from it, revelations that came near the very end were driving him into a deep, potentially life-threatening depression. But a chance visit to what he claims as the unlikeliest corner of the Baton Rouge Barnes & Noble – Poetry! – led to him picking up and perusing the first few lines of Dante Alighieri’s Inferno – and perceiving in the medieval wanderer, lost in a wood, weak and weary … himself. As he proceeded into the poem, he was able to relate the sins for which the lost souls suffered to the causes for his own troubles, and – with the help both of a therapist and his confessor – turn his realizations into a journey of self-healing. What makes this book so compelling, for me at least, is how Dreher takes us along with him on that journey, alternating the narrative of his life and emotional deterioration in the months after moving back to Louisiana at the end of 2011 with insightful spiritual commentary on Dante. We follow him as he follows Vergil in the descent toward the depths of hell, then (more briefly – but isn’t that how it always is? Dante may have written the three parts of The Divine Comedy [Inferno, Purgatorio, and Paradiso] as almost exactly equal in length, but that’s not how they loom in peoples’ consciousness!) through purgatory and heaven. It is the journey on which he takes us as it gradually unfolds that, in my judgment, makes this “self-help book” so effective. The reason is actually given on pp. 53-54:

“Neuroscientists have found that the telling of a story, no matter how simple, lights up parts of our brains that lie dormant when we process language. In fact, research has shown that the brain reacts to stories in the same way it responds to actual events. When a story fully enters into your imagination, it is as if you experience it yourself. The more vivid and sensual the descriptions within a story, the more powerfully its lessons, moral and otherwise, lodge in the brain.

“Annie Murphy Paul, writing about these discoveries in The New York Times, observed: ‘Reading great literature, it has long been averred, enlarges and improves us as human beings. Brain science shows this claim is truer than we imagined.’

“Stories tell us how to think and what to do. They teach us what to love, what to fear, what to hope for, and whom to trust. Stories reveal to us how we differ from others and how we are the same. They tell us where we came from, where we stand, and where we are going. Stories impose order on chaos. From grand cosmic myths to intimate family tales, it is in stories that we find meaning, purpose, and the truths by which we live – or if we are unlucky, the lies that lead us astray.”

In Dreher’s case, we are with him as Dante’s spiritual journey helps him to examine the story of his own life and work out ways to deal his demons and come to peace with his life as he adjusted his idyllic expectations about returning to the small-town Louisiana of his upbringing to reality. And he builds on his own experience to draw out the life-lessons to be found in Dante. Each of Dreher’s chapters ends with a short boxed summary plainly stating the main point. I quote from the end of chapter six, “Into the Black Hole,” which highlights a thesis of this book, that even the worst of sins is ultimately misdirected love:

“You cannot control other people, but you can control your reaction to them. That is a key principle to your healing. Sin is not the breaking of moral rules, but a failure of love. We love the wrong things, or we love the right things in the wrong way. All of us do this; it is the human condition. Nevertheless, you are responsible for your own sin. It’s why you are in crisis. Thinking of sin as law-breaking, as many of us do, disguises the way it works on our hearts and minds, and keeps us from dealing with it effectively. Here’s a better model: Think of love as light, and sin as gravity, a force that bends light. The stronger the gravitational field, the farther love will fall from its mark. Hell is a black hole, where the light of love goes to die. Your goal in life: to put as much distance between your heart and the black hole’s deadly gravity field as you can. Passing too close to it will make even your most sincere acts of love land far from their intended destination. Don’t worry about the hearts of others; you are captain of your own.”

I highly recommend this book on several levels: As a continuation of the Dreher family’s story post-Ruthie Leming; As a running commentary on perhaps the greatest poem of western civilization; and yes, As a “self-help book” applying age-old lessons from the Christian foundations of that western civilization to life in the modern world.