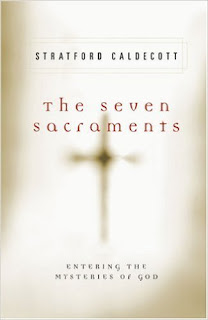 This is the second book by Caldecott that I have read – less than ideally, I am reading what I would consider (in my somewhat ill-formed opinion, having discovered him only fairly recently) his “Catholic Trilogy” out of order, having started with the middle book, All Things Made New. And having proceeded directly from The Seven Sacraments into The Radiance of Being, which deals with the mysteries of existence itself, I’ve come to the conclusion that Stratford Caldecott is right up there with G. K. Chesterton in another way, beyond those noted in my blog review of All Things Made New [LINK]. He makes Christianity weird in a fascinating and beautiful way [see here with regard to GKC: LINK]. Sure, as I told my wife the other night, “I’m going to read some more Stratford Caldecott and get a headache,” trying to get my head around the concepts he throws around makes my head hurt, but I think that is just my mind being forcibly expanded – to the better.
There’s no way I can adequately summarize this particular book. Among the patterns that unfold across these pages, frequently being brought back again for reconsideration in new and deeper ways, are:
I have made a comprehensive spreadsheet of what I think is the essence of the relationships he finds, but there’s no way to embed it here; I can only post a link to it in my Google Drive: [LINK]. It is woefully inadequate. At one point, Caldecott does provide a chart which I scanned and present below (from p. 101): 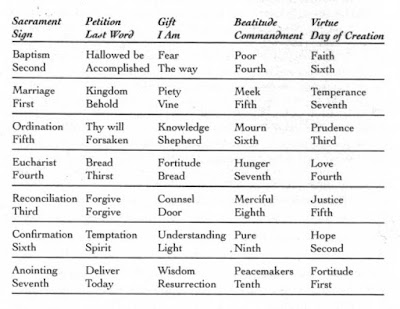 I think his layout hints at what would really be necessary, I feel, to encompass all he puts together – some kind of multidimensional matrix; reducing it to two dimensions as either he or I have done is not sufficient. And, of course, any such chart can only hint at the insightful commentary that he presents, expanding on the relationships. There is a lot of fuel for contemplation and prayer here. Some of it does, as I state above, get downright weird – I would highlight in this respect his discussion of the days of creation in chapter six – but the ideas he plays with are by no means unprecedented even if drawing on apocryphal traditions that have never been accepted into orthodoxy, or even literary notions such as those of Lewis and Tolkien’s fellow Inkling Charles Williams. For instance, the discussion of Baptism (pp. 118 ff.) in which the story of Eden and the Fall of Man is reinterpreted into a metaphysical collapse through multiple planes of reality.

Taking notice in his final chapter, as every convert to Holy Mother Church does immediately, of a woefully inadequate (more often nonexistent) process of ongoing catechesis, Caldecott ends by calling for a return to a necessary sense of mystery through and in the Sacraments – mystagogy, “initiation into the mysteries.” Drawing further on the writings of the early medieval monk St. Denis or “Dionysius the Areopagite” regarding the three phases of the Christian Way – purification, illumination, and union, Caldecott lays out suggestions on how to explore the ideas set forth in his book “in your own parish or with your friends, by starting a course in the mystical teachings of the Christian tradition.” In my experience, we here at the Basilica in Natchitoches are uniquely blessed to have Fr. Ryan Humphries’ weekly (during the school year, coincident with the youngsters’ CCD schedule and going into its third year) “Wednesday Night Catechism” talks for the adults of our parish. Such programs usually have to be lay initiatives (as our own “Monday Night Bible Study” has been, for seven years now). While I cannot say that I think this book and the often deep, always sublime, ideas it puts forward would be the best place to start such a thing, it would not be the worst, and it definitely would be interesting with the right group.