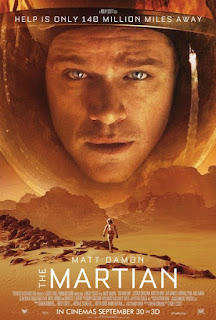 Disco is dead for a reason. I fear it is about to make a comeback of sorts, however, given its prominence in this wonderful movie about a near-future “Robinson Crusoe on Mars.” Everyone, I’m sure, knows the basic plot, based on the previews alone: One of the six first astronauts to walk the surface of the red planet is believed killed in a freak accident during an emergency evacuation – but he survives, stranded, with only a fraction of the supplies he will need to survive the four years before another manned mission could possibly reach him, given the realities of orbital mechanics. He has no choice but to start “sciencing the shit” out of his hopeless situation. What results is, as was the book, an amazing, uplifting tale of human endurance, innovation, cooperation, and ultimate triumph that I’m not going to make any more detailed comments on than that, except for these few:

First, this movie is a meticulously faithful adaptation of the book, albeit streamlined a bit to fit into a two-and-a-quarter-hour movie length. All of the basics are there, with the structure possibly allowing for some of the omitted parts possibly appearing in an expanded director’s cut. I noticed only a couple of major deviations from the book, both of them in the last few minutes, one of which made for a more satisfying closure to the story overall by essentially bringing things full circle to the launch of the next manned mission to Mars, the other more of a narrative substitution to allow one of the characters to experience, if only in her own mind, a redemption of sorts.

Second, although I have seen comments that the main character is underdeveloped in the book – a charge with which I would disagree in any case – one definitely cannot say that in the movie if only because of the tremendous talent of Matt Damon.

Third, if there was any "softening" of the hard science in the story – book or movie – it was nothing I could pick up on, unlike a couple of unlikely elements in Gravity. That is itself gratifying. Good, realistic, hard-science fiction has become so hard to find these days, especially in the movies, where what passes for "science fiction" would more properly be termed "space fantasy."

Fourth, demonstrating how the visual medium can bring something home that all the words in the world cannot, when reading of astronaut Watney’s extended period of severe rationing to extend his meager food supplies as far as they will go we are told how he is shedding body mass – but it takes only an instant (and, presumably, the magic of CGI) for us to perceive the effects much more starkly. I’ve always felt that prose and film each do different things very well, and this is a perfect example. (Incidentally, and this is a digression, comics accomplish a different set of narrative tasks well, but which overlap with both prose and film.)

With that in mind, I give both the book and the film my highest recommendations. I know that for myself, I am glad I read the book first, but it’s not really necessary. The movie holds up perfectly well on its own as a good adaptation should. Yes, there are some little details shown but unexplained in the movie that are perfectly clear to someone who read the book, but I don’t think they are terribly noticeable. Nevertheless, the book does give a deeper sense of the scientific gymnastics Watney – and ground control – must go through in figuring out how to bring about his survival and rescue. So it is well worth reading.

In any case – I loved the book, looked forward to the movie, and found it everything I hoped it would be. I am happy. Except for this damn disco music stuck in my head.