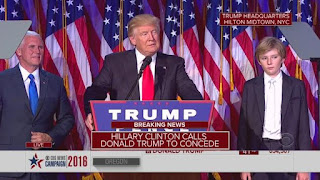 Eyes wide open. That's how America has collectively chosen to take on four more years of Obama. No longer can we take solace in the notion that we fell victim to the charisma of a masterful campaigner who promised to take us past the divisions of the past into a brave new world. Having seen how well that has worked out for the past four years, we (as a nation, by the slimmest of popular vote margins, by a wider margin in the Electoral College, but that is our system for better or worse) have chosen four more years. I fear it will be much longer than that, because whereas I believe there was a chance to turn back from the brink now, I believe that four more years will entrench such radical change to the very nature of our country that there will be no going back. Perhaps the saddest thing to me is that slightly more than half of our people are perfectly fine with, even desirous of, that. This is what they want. ... No, really the saddest thing to me is that the slightly LESS than half of our people must now live under the same deteriorating conditions that they strove to avert. But that is our system, for better or worse. God bless America, for we surely need it.

On this election eve, here's a repost from immediately post-election four years ago. Honestly, I didn't think then there would be any chance of putting a halt to the degeneration that resulted from the 2012 catastrophe, much quicker than anyone, even its proponents, dreamed possible. And a vote for Trump may well not turn back the tide. It is totally unpredictable what he will do as President. But it is absolutely as certain as anything in this world can be what Clinton will do. Our pastor likened the choice we have to that between a hand grenade and Russian roulette, which I think is apt. But as things stand, with Trump there is a chance, slim but better than I expected, to put a stop to the madness. Voting for Clinton, or voting for a no-chance third-party candidate in some sanctimonious but ultimately empty protest that in effect is a vote for Clinton, is a vote to continue and accelerate the downfall of our civilization. Consider that as you head to the polls tomorrow. Do what you think you must, but do NOT then claim you did not know what the consequences would be.

Even so, yesterday, I just could not see the political ruling class letting Clinton lose. Not to Trump. And I was anticipating watching the election returns to be too depressing for words. So I left the television off and got to work on one of my many projects that I think make me the most unproductively busy guy you know.

Ultimately, however, I was not able to resist, to a degree. About 20:00 last night I started dropping in on the returns, on of all places the New York Times website, which had a neat up-to-the second tally and breakdown, summarized in a dial showing their shifting projection of who would win. It looked something like this, although this is the current, basically final, version:

I watched this off and on, while otherwise busy with my project. But I was there early enough to have the satisfaction of seeing the first meaningful state returns completely destroy the liberals’ initial projection of a Clinton victory (about 70% probable when I started). By about 21:00 or so it had passed 50% and was then progressively forecasting a Trump victory as the needle fairly quickly migrated around the dial:

By about 22:30, when I headed for bed, I was pretty confident that at least I would not have to wake up in the morning to a Hilary Clinton Presidency. That was confirmed about 01:30 when I woke up briefly and checked my phone, and about 05:30 I was able to post to Facebook, “I am not happy that Donald Trump is President. But I am ECSTATIC that Hilary Clinton is NOT President. And very satisfied that the elites (elitists) in the media are so discomfitted by this outcome.”

That also goes – double – for the elites (elitists) in both parties. If Trump had truly had the Republican “leadership” behind him once their own process made him the nominee, I think he would have run away with the election, and Clinton would have gone down as she deserved – hard. As it stands, she might well squeak by winning the popular vote by a narrow margin, which will inevitably reopen the almost-always open debate about ditching the Electoral College [LINK]. That would be a mistake.

Looking back over past elections today, as the parties have become more polarized, and, frankly, liberals in both parties become more and more entrenched and ruthless in their determination to hold onto power however possible, the popular vote has tended toward parity, with a single-digit percentile difference between the winners at most. That’s probably at least partially because of an inherent polarity between two extremes that would probably result in progressive redefinition of the two parties’ fundamental natures toward such a parity (think of how the modern Republican “leadership” would have been considered liberals in the past). But I think one of my former students – now a colleague (and one of the few politically sane ones too, I might add) also hit the nail on the head with regard to this (and other recent, I think) election(s) – the liberals miscalculated on how many popular votes they would have to “find” (steal) for Hilary to edge out Trump and carry the Electoral Vote. By its nature, in a way I cannot really explain (because I really don’t understand it, but feel it in my rather considerable gut), the Electoral College is much less malleable than the Popular Vote, depending as it does ultimately on state aggregates of actual votes. They could not steal too many or it would be too obvious, but they miscalculated on how many votes (and exactly where, probably) they would have to steal to assure an Electoral victory. So, once again, as in 2000, the Electoral College system saves the day. Imagine President Al Gore in the days after the 9/11 Event. I shudder. Imagine four more years of the accelerating degeneration of our civilization that President Hilary Clinton would have overseen had she won last night. I shudder even more violently. At least we are spared that, and, although I might well – probably will – be disappointed in what the coming Trump Presidency actually does toward reversing the decline, it is at least very doubtful that he will continue down the same course. Even if Clinton does end up edging out Trump in the popular vote – still not assured – the Electoral Vote and thus the outcome of the election is set. Long live the Electoral College!