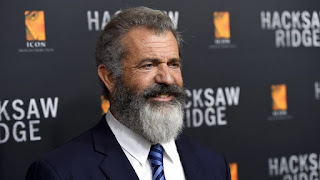 “The subject matter is vast. I mean, it’s not just about … a Resurrection, and, you know – […]  It’s not the Burnette version, you know, like – … It’s not the, uh, you know, man comes back, walks through walls, has holes in hands, eats a piece of fish, you know. It’s not that. It’s uh, it’s ummm, it’s a, it’s a big – , it’s a vast theological experience, I think … You need to delve into what that means – in – in a way … that you take that as the centerpiece and you juxtapose it against many things that go on around it – and, and in other realms. So that you have to under– It, it gets pretty wild. It’s like an acid trip, but I think, umm [...] it’s okay -- you’ve got a spirit guide to take you through it.”

(The bracketed ellipses are a couple of interjections by Arroyo.)

That last bit sounds like something of a version of The Divine Comedy … a bit later Gibson said, essentially, that in the writing more and more is “revealing itself” to himself and his cowriter, “from the fall of the angels to….” He unfortunately did not follow that up.  But it sounds interesting.

I’ve been concerned about the prospect of this movie ever since it was announced a few months ago. After hearing this, I’m both less and more concerned. It certainly would not be like anything ever seen, for instance the various versions of A.D. or the aforementioned Risen. But I also don’t know how what Gibson describes could be done effectively – but if anyone could do it, I think it would be him. Finally, in the end, I’m not really sure it would have the pan-Christian appeal that The Passion did – even though much of the detail that was “added” to that story came from Catholic mystics and visionaries, in particular Blessed Anne Katherine Emmerich. I worry that it would for that reason tank at the box office – which, of course, has nothing to do with whether it would be worth making or seeing – but a poor performance could end up being used as a bludgeon against future attempts to make faith-based, especially Biblical, movies, and further tarnish Gibson’s own reputation as well as that of The Passion of the Christ.

That last, Gibson’s own already-tarnished reputation, I’d like to end by saying a few words about. It is true that in the wake of the appearance of The Passion of the Christ now almost thirteen years ago, Gibson – one of the few unabashedly conservative Catholics in Hollywood – did some scandalous things. His drunken rant about “the Jews”; his affair, messy divorce, and current personal life in a publicly adulterous relationship; and I’m sure there’s more. Which – especially the first, but the second as well because it gave leftist Hollywood the opportunity to scorn him as a hypocrite – led to him being ostracized into what has been a ten-year absence from a directorial career. All of which has immediately led to him being criticized for even thinking about making a movie about The Resurrection, that he’s somehow unworthy of the task. I don’t see any of the situation quite that way, however.

Last summer, on a bit of a whim (but also because I was working up some Bible Study lessons having to do with the Passion, Death, and Resurrection), I rewatched The Passion for maybe the fourth time since it initially came out. It remains probably the most powerful movie I have ever seen. It was truly heart-wrenching, and I mean that literally. I had tears streaming down my face at several points. But it also occurred to me that I can very well understand the hatred that movie – and Mel Gibson himself – engenders. … TRUTH HURTS. … Satan must hate that film, and has to have been assaulting Mel Gibson with every kind of demonic attack possible. And Gibson, being human, ultimately gave in. Which is sad. But who else could have stood up to the spiritual attacks he has to have undergone? I’m not excusing his sins – and I don’t know that he himself would “excuse” his sins. He is very well aware of his fallible human nature. I do not know his heart. But I pray he is working on reconciling himself with God. He certainly still professes a deep sense of his own sin, which is, of course, the first step. And, frankly, we are in no position to judge him. With that movie, Mel Gibson performed a great work for God – making the Passion of Christ real in a way never before done – which unfortunately brought him directly into the crosshairs of Hell. … I think that explains a lot about his subsequent life and career implosion, but I wonder as well if making this new movie he is planning could be his path to redemption. Not in the eyes of the world, of course, but in the Eyes of Him Who matters. I for one will be praying for him, that he is better able to withstand what will doubtless be redoubled assaults by the forces of darkness as he undertakes telling the rest of the Story -- which I, on balance, find myself eagerly awaiting.

Email ThisBlogThis!Share to TwitterShare to FacebookShare to Pinterest
Labels: Catholicism, Mel Gibson, movie, religion, The Passion of the Christ