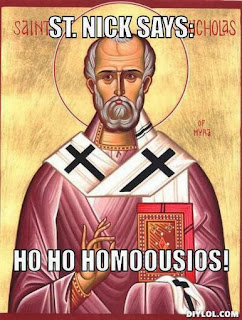 It's well known that Santa Claus, "Jolly Old Saint Nick," is based on an historical figure, St. Nicholas of Myra, who lived in the early 4th century, whose Feast Day is celebrated on 6 December.  According to the most famous legend associated with this good bishop, upon learning that one of the members of his church, a poor man, had three daughters for whom he could not provide dowries and who were thus in all probability fated for spinsterhood or worse, Nicholas secretly left gifts for the girls to provide for good marriages.  Out of that story, no doubt encouraged by the timing of his feast and the easy association with the Gifts of the Magi to the Christ Child, evolved the idea of Santa Claus as the giver of Christmas gifts.

For more about St. Nicholas and how he "became" Santa Claus, I can do no better than refer you to a wonderful web site devoted to the saint both historical and fanciful, St. Nicholas Center:  Discovering the Truth About Santa Claus [link].  Included there is another somewhat lesser-known tale regarding St. Nicholas, however, that I have seen referenced more and more in recent years and which has given birth to a host of memes compiled in a humorous post by "Dan" at Rockadoodee! [link] (which I have freely mined for some of the images here), how the historical St. Nicholas "dealt with" the heretic Arius of Alexandria during the Council of Nicaea in AD 325 [link].

Briefly told, in the years after the AD 313 legalization of Christianity -- hitherto an outlaw, persecuted cult -- by the Roman Emperor Constantine the Great, it seemed a host of new problems presented themselves to the early Church.  Among them was a proliferation of divergent opinions regarding some of the central tenets of the Faith.  One of the most pernicious was the teaching of a priest of Alexandria Egypt, Arius, that the Son was not the co-equal and co-eternal Second Person of One Triune God, but rather that the Son was the first of all beings created by the Father.  Arius therefore denied the doctrine of the Trinity, with all kinds of theological implications regarding even the efficacy of the Sacrifice on Calvary and our very Salvation.  But his thinking proved surprisingly popular, causing division within the very Church that Emperor Constantine was hoping to use as a force to unite the crumbling old Roman Empire.  Constantine therefore determined to call all concerned parties -- 300-odd bishops -- together to hash out a consensus.  They did so at what became the first of twenty-odd Ecumenical Councils of the Church, the great Council of Nicaea.  During the course of the arguments, Bishop Nicholas of Myra is said to have grown so incensed at Arius' words that he hauled off and struck him a mighty blow, 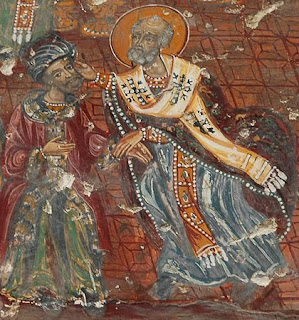 ... thus violating the Emperor's peace and earning immediate condemnation from his fellow prelates, which censure was just as immediately trumped by divine intervention -- Christ Himself and His Blessed Mother appeared and restored Nicholas to his office.  Ultimately, the Council condemned Arius and his heresy, which is what lies behind the famous (and somewhat cryptic) central passage of the statement of belief that came out of those events, the Nicene Creed which has been repeated every Sunday now for almost 1700 years:

[The Son is] God from God,
Light from Light,
True God from True God,
Begotten, not made,
Consubstantial with the Father ....

The words that cause eyes to glaze over, "Consubstantial with the Father," are the restored (since 2011) and far more correct English rendering of the Latin "consubstantialem Patri," itself a direct and exact translation from Greek, "homoousion to Patri [ὁμοούσιον τῷ Πατρί]," meaning most literally "of the same substance with the Father," not "one in being with the Father" (the grossly imperfect 1960s-2011 English rendering).  Greek, of course, would have been the language of that eastern part of the Roman Empire where St. Nicholas and the majority of Christians during the period lived, and the Greek "homoousios" as the doctrinally exact description of the relationship between the Father and the Son which Nicholas physically defended explains the great pun contained in the image which which I head this post.

The image of St. Nicholas rebuking the "naughty," however, brings to mind what is perhaps my very favorite recent portrayal of Santa Claus in popular literature, which I re-present here from last year -- which has the perfect punch line for taday's modern, impatient culture.  Arius can count himself fortunate he wasn't dough-popped by this Jolly Old Saint Nick!:


From Cold Days (2012), the fourteenth volume in The Dresden Files by Jim Butcher – at the Winter Court of Mab, Queen of Air and Darkness, told in the first-person by Harry Dresden, one-time professional wizard of Chicago, now Winter Knight:

“I studied the man standing beside the Erlking.... He was a sharp contrast. The Erlking was huge, but there was something about him that suggested agility and grace. It was like looking at a tiger. …

“This man wasn't a tiger. He was a bear. His shoulders were so broadly proportioned that he made Herne [the Hunter, the Erlking] look positively slender by comparison. His forearms were nearly the size of his biceps, and he had the kind of thick neck that you see only in power lifters and professional thugs. There were scars all over his hands, and more on his face, all of them faded away to ancient white lines, like those you see on some lifelong bikers. He wore a coat of mail of some kind – a creature of Faerie couldn't abide the touch of iron, so it had to be made from something else.

“Over the mail he wore a long, open coat of scarlet, trimmed in white fur. It was held in with a wide black leather belt. He had such a barrel of a chest that even a modest bit of stomach was a considerable mass on his huge frame. His gloves were made of black leather trimmed with more white fur, and they were tucked through the belt, right next to the very plain and functional hilt of an unadorned broadsword. His hair was short, white, and shining clean, and his white beard fell over his chest like the white breaker of a wave. His eyes were clean, winter sky blue.

“I lost track of what Eldest Gruff was saying, because my mouth was falling open.

“The second man noticed my expression and let out a low, rumbling chuckle. It wasn't one of those ironic snickers. It was a rolling, full-throated sound of amusement, and it made his stomach shake like . . . dare I say it?

“His hand engulfed mine as he continued to chortle. His fingers could have crushed my bones. 'I know who you are, Dresden,' he rumbled. 'Call me Kringle.' …

Merry Christmas! ... and be sure to stay off the naughty heretic list! 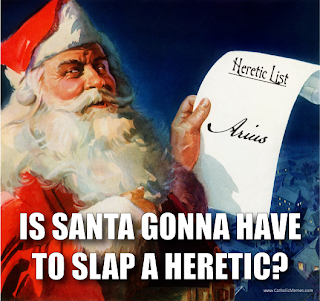