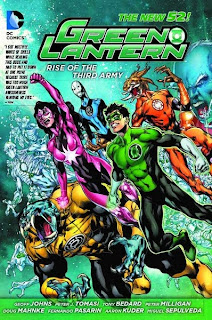 Like a couple of other DC series, I like Green Lantern – and indeed much of the Lantern'verse corner of the DC nUniverse – very much … in collected format. Readers of this blog may in fact remember how I chose to drop back to collected format with the advent of the New 52 after “burning out” on monthlies and repeated Lantern'verse-wide events in the months beforehand, but when I acquired and read Green Lantern vol. 1: Sinestro, the first New 52 collection, I enjoyed it so much [link] that I jumped back into the monthlies – for just a couple months that quickly reminded me that the series indeed reads much better in collected format.

Then a few months back came the realization that with the return of Lantern'verse-wide events, DC was going to collect the four franchise titles (GL, GL Corps, New Guardians, and Red Lanterns) both in their separate titles and in “compendium” volumes centered around the event and interweaving the four titles' issues to (presumably) tell the entire multifaceted story. I initially decided to just stick with the collections for the two titles I was interested in (GL and GLC), but then accidentally neglected to pre-order the next GL volume. Finally, a few weeks ago, I was in Barnes and Noble and, seeing this “compendium” volume, I impulsively bought it.

Of course, an effect of me, relatively speaking, whizzing through my monthlies that I received early in November was that for the first time in a while I was actually able to get to a pretty vast and growing backlog of collections that I have accumulated. (I actually got through several in the past couple of weeks, what with also being off for Thanksgiving week.) Rise of the Third Army was the first.


My overall assessment is: Man, I do love me some Green Lantern action, read in this far more reader-friendly format (for myself, at least)! I maintain that, somewhat unfortunately, Geoff Johns has shifted his entire writing style to one no longer suited for the episodic format, and since he was until recently the show-runner in particular of the Lantern'verse, everything here reads so much better in a big chunk like this. I thoroughly enjoyed it rather than more or less forgetting in the intervening weeks what had happened last and thus being pretty thoroughly mystified – and frustrated – each month. And this story is so sprawling that in order to get the full view you do need to be reading all of the series – even if I do still detest the whole concept and especially the execution of the Red Lanterns as being pretty egregious grotesquery. On the other hand, I quite surprisingly enjoyed the New Guardians issues 'way more than I expected. Kyle Rayner has always been my least favorite of the quartet (now quintet?) of “Earth Lanterns,” and with that book being centered around him I hadn't even considered reading it. Here, however, and at least in the issues contained herein, I really liked the interplay between himself and Star Sapphire Carol Ferris (whose new costume I heartily approve, by the way). As to the two “main” GL titles, what can I say – I thoroughly like John Stewart and Guy Gardner in addition to Hal Jordan, and found newcomer and “fifth wheel” Simon Baz an interesting add to the mix. And it's a good story, albeit continuing Johns' long-running trope of the blue midgets as soulless, manipulative bastards that I wish he hadn't started in the first place – but since they're telling that story, at least they're telling it well. And for the most part, it's the characters and the world of the Green Lanterns that is so compelling. Many of the individuals in this science-fiction/super-hero/space-opera/police-procedural/legal-drama mash-up shine in virtually all colors of the spectrum. Well, except for red....

There is a bit of a trade-off in buying this event-compendium rather than the collections of the individual series, however. I realize there's something missing. Here's what I mean:

The main Green Lantern series vols. 1 and 2 comprise issues #1-6 and 7-12 (plus most of Annual #1 concluding that second story-line), respectively, of that series. Issue #12 was followed by the “stunt” issue #0, which is not included in either GL vol. 2 or Rise of the Third Army. Issue #0 tells the story of how Simon Baz received Hal Jordan's ring and leads directly into the beginning of issue #13 which leads off Rise – and it is a very pertinent story to what follows! I've read it, of course, since that was one of the few issues I got in my abortive attempt to jump into the monthlies, but had I not, I'd've been totally lost. And it is collected in the third of the series collections, Green Lantern vol. 3:  The End [link] ... along with several issues that are here, but only from the GL series itself.

Bad form, DC! I like the idea of such compendia as an optional way to collect such closely related series as the Lantern'verse titles, and would probably buy a series of such compendia were DC to offer it as an ongoing option rather than the individual series collections. But it seems that in order to get all the issues, including pertinent issues of all the series in an event, they want you to buy all the series collections in preference to the compendia. I'm sure they would prefer you buy both, and I'm sure there are those who do. I don't intend to.

My plan going forward depends somewhat on how the Lantern'verse stories progress. Geoff Johns and his cadre of writers are ending their run at about issue #20 of all the series. The new writers are, as I understand it, at least kicking off with a line-wide cross-over. My intention is to get through that in compendium form. After that, I believe they are to split off at least for a while – and I'll only buy those titles I'm interested in, in series trades. That may well include New Guardians (and I may go back and get the first couple of trades of that series as well, maybe reverting to compendia if (when) an event happens. Nothing I can conceive of would make me get series collections of Red Lanterns, or the newest addition to the 'verse, Larfleeze. Issues from those series may be integral to events, and I'll read those, but RL at least has not been enjoyable even in those cases. That kind of grotesquery just does nothing for me. And any individual issues I might miss because of that inconsistent pattern of buying I can just get digitally.

Anyway, as a standalone story (inevitably leading into another compendium which will be published in a few months, Green Lantern: Wrath of the First Lantern) is, with the suggested prefatory reading of Green Lantern #0, this particular book – Green Lantern: Rise of the Third Army – is an excellent read, with the typically top-notch art that has long graced the Lantern'verse titles.  This is an incredibly pretty book.