The Superman Files: The Story of Kal-El, Compiled by Brainiac 5 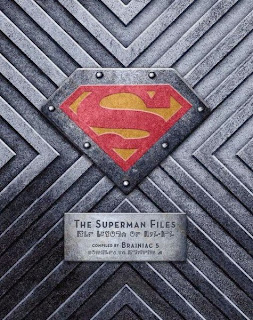 “Translated from the Original Interlac” by Matthew K. Manning (2013)

This is an interesting coffee-table book published rather late during this just-ending 75th anniversary year of the first appearance of Superman. The simplest, most straightforward short description is that it comprises an in-DC-Universe biography of the greatest super-hero of the 21st century compiled from the perspective of his 31st-century comrade in the Legion of Super-Heroes, Brainiac 5.* Generally speaking, it combines commentary from Brainiac 5 with documentary material from the Man of Steel's own journals, news reports, and sundry other faux “sources” to form a more-or-less cohesive narrative stretching from background on his lost homeworld of Krypton to the 2013 present. It does fall short of being a comprehensive history of the character in that virtually no account is taken of materials published before ca. 1985 when the Crisis on Infinite Earths remade the DC Universe and was followed by the 1986-1987 Man of Steel mini-series reimagining the flagship character with a stripped-down, more cohesive continuity that would prevail for approximately the next 25 years. But over the last quarter-century, as far as I can tell, most everything, every major event and story-line, is reconciled into a fairly organic whole that hangs together remarkably well. There are various contradictions intrinsic to the ongoing nature of the comic-book medium, with its serialized, continuous narrative inevitably necessitating period rewritings of the internal history along the way (termed “retcons” for “retroactive continuity”**), but even these are accounted for as far as possible via Brainiac 5's acknowledgment of the various chronal discontinuities that have become virtually a staple of DC's story-telling – with the most recent Flashpoint Event that gave birth to the current “New 52” and its sometimes radically different DC Universe that began in 2011 being frankly acknowledged in the final few pages. Even if you have read Superman continuously from the mid 1980s to the present (which I have not, mainly reading a few years from the beginning as well as the last half-dozen years or so, with scattered specific story-lines in between), I can imagine fans of the character paging through this large volume with immense enjoyment, reveling in the variety of art selected from across that period, generally presented as if photographs posted into a scrapbook, with attendant commentary and textual pieces telling the overall story as if from a variety of perspectives and viewpoints. I know that I have done so, since receiving it from my wife and son for Christmas.


It's a very attractive book. As an illustration of the interior, here's a single double-page spread, taken from "translator" Matthew Manning's own blog (where there are others [link]; Amazon.com's “Look Inside” feature [link] also gives enough that I for one knew this was a book I needed): 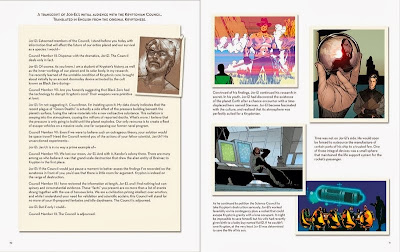 Again, I do believe that as a 75th-anniversary celebration volume this book does fall short in not giving sufficient acknowledgment to the character's roughly half-century history before the mid 1980s. From my skimming, I recall only one image that clearly invokes a pre-Man of Steel story. Nonetheless, I can understand basing the biographical structure on the relatively straightforward narrative that prevailed during the more recent decades, and an argument can be made that a great deal of the more popular story-elements from the earlier decades (especially the Silver and Bronze Ages of the 1960s and 1970s) did eventually resurface in “retconned” form in later years, so they are not entirely absent. A more serious shortcoming, I feel, is that there is no index at the end sourcing the various images and story-lines that are chronicled, for readers who might be intrigued by the short overviews presented here. As I mentioned above, although I have read various bits from the middle years of the span chronicled here, there is much (mainly from the 1990s) with which I have little or no familiarity and might like to pick up either collections or back-issues to read the full story for myself.

Nevertheless, I think this book is a fine achievement that I see myself going back to time and again, simply to dip into it for sheer enjoyment, not to be read per se, but to be skimmed, browsed, and reveled in.

= = =
* As a die-hard Legion fan, I cannot help but note the irony that by the conceit of this inherently significant celebratory volume being supposedly “compiled by Brainiac 5” the Legion of Super-Heroes is given such prominence at the very time when their most recent series has been canceled with no known plans to bring them back any time soon. Although the current absence of the Legion is for me an open wound, I do take solace that they are not forgotten as an important part of Superman's story.

** One thing that does annoy me about this book:  I'm barely coming to accept the name "Shazam" for the New-52 version of "The Hero Formerly Known As Captain Marvel"; to be asked now to accept a "retcon" of his name for the pre-Flashpoint DCU is downright ... heartbreaking.  That's the only word I can come up with.
Posted by Kent G. Hare at 23:16