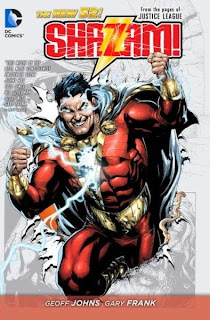 Well, nobody's more surprised than me that I ended up buying this collection, and in hardcover to boot! From the very beginning of the New 52 version of The Hero Formerly Known As Captain Marvel, I found so many things to dislike about Geoff Johns' portrayal, mainly centering on the surly characterization he imparted to Billy Batson, which seemed very much a stereotypical obnoxious brat just like his similar and nearly simultaneous portrayal of young Bruce Wayne in Batman: Earth One. That wasn't the only aspect of the “updating” of the story that I didn't care for, to be sure. The new Dr. Sivana, bulked up and looking more like a cheap Lex Luthor knock-off, also rubbed me the wrong way. And the mess just seemed to get worse and worse as month after month of the back-up series appeared in the pages of Justice League, what with Billy and Freddy first attempting to capitalize on Billy's new powers to make money, then considering Billy's new adult appearance as a way for them to get alcohol. For someone like me, who loves the simple, almost childlike wonder and charm of the original Captain Marvel, which has, however imperfectly, informed most of DC's portrayals of the character hitherto (Dark Mary Marvel and subsequent developments being lamentable departures from that model, essentially exceptions that prove the rule), it seemed like these newest horrors were just going from bad to worse. It was heartbreaking.

... I was astonished when everything Johns developed over well more than a year suddenly came together in a full-issue conclusion to the story (Justice League #21) that inexplicably transformed the main thing I'd disliked leading up to it into an integral element of an amazing exercise in character development. Sure, in that regard, the New 52 Shazam! exemplifies my oft-made point that Geoff Johns no longer seems able to write satisfying single-issue (or in this case, mostly shorter backup) stories, and yet I must admit that very often the ultimate pay-off when all those individually unsatisfying parts end up coming together as a whole is amazing. I immediately wanted to go back and reread the entire tale from the beginning, straight through, informed with knowledge of where the story was going. Lack of time and the hassle of having to dig out the individual issues which had appeared over the course of many months kept me from doing so, however. Then, a few weeks ago, I came upon the hardcover collection in Barnes and Noble, thumbed through it, and realized that I very much wanted to have and read the story all in one virtually seamless volume. So I picked it up (already wondering how to begin the inevitable blog post which has me eating a bit of crow). 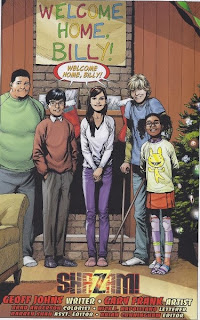 And, as I expected, I thoroughly enjoyed the rereading. Sure, there are elements of the reimagining that I am not all that enthusiastic about, generally the overall darker tone that is, unfortunately, part and parcel of the New 52, but within the constraints that imposes, Johns and artist Gary Frank produce a story I will no doubt reread multiple times. Main character Billy Batson, who starts out seeming a one-dimensional caricature embodying the worst traits of teenagers today, is revealed instead to embody depths of goodness that he himself would not willingly admit and indeed had built up walls of emotional defense against resulting from the unfortunate circumstances of his young orphaned life. 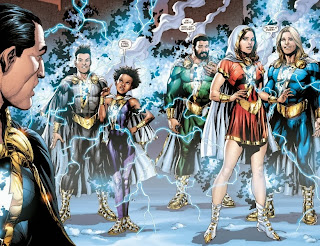 Those walls were broken down by a new realization that he has found a new family. I'm certain that it will ultimately turn out that Mary is indeed Billy's sister. Clearly the diverse other kids who are being fostered by in the Vasquez home are not even inadvertently Billy's family in the same way, but the message of this story is that the idea of family is as powerful as any shared DNA. Spoiling a turning point in the story, I had hoped that (given the possibilities of this reimagining – if you're departing from the original model, why not go all the way?) by the end of the story all six of the kids would be integrated into a new “Captain Thunder” like in the Flashpoint universe (and I do prefer that name for the character, especially given it was indeed the original name for “Captain Marvel” in the unpublished “ashcan” versions of issue #1 of what would become Whiz Comics) … but I like what developed even better. I'm not sure how juggling six kids with subtly different expressions of the Shazam Magic will play out – or was this a one-time, or (more likely, I hope) only very seldom, sharing of Billy's powers with his brothers and sisters. That's what it seemed when he tried sharing power with Tawny the Tiger (whom he had for much longer, based on his only photograph of his mother and father which was taken at a zoo, come to think of as “the closest thing to family I've got”) and the Magic went awry, ultimately collapsing, at least from the other kids. Clearly Billy is the new Champion of the Magic, but remember that in the original, so it was as well. Well, I think Mary getting powers was because the Wizard had inadvertently given powers to one of a pair of twins, but they – or he – shared powers with Freddy, and they kept them. In any case, a new, multiculturally mixed “Marvel Family” could make for some interesting stories in future, regardless. 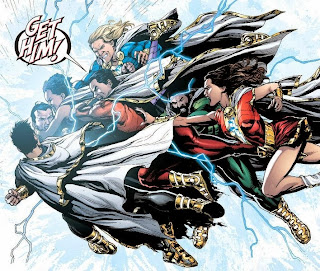 I still lament the ways this story shares in the overall homogenization of the new DC into a cheap imitation of what I consider to be the least attractive traits of Marvel Comics – the overall darker tone, the continual angst. One example of that which I identified above, however, I think may be evolving its own way, perhaps ultimately back toward the classic model, much as Billy seems a much more likeable kid by the end – yes, Dr. Sivana is a very different character here, but the big, buff, bald scientist (what I called above a “cheap Lex Luthor knock-off”) seems in the end to be considerably more gaunt, even shriveled by his embodiment of some kind of black magic, and could (I hope) end up at least visually much more like the original Thaddeus Bodog Sivana. And by the last page of the story we witness him link up with one of the more ridiculously charming rogues who ever confronted the original Captain Marvel.

I find that once again, I have concentrated on the writer to the virtual exclusion of any mention of the artist, Gary Frank. Commenting on art I find even harder than on writing. Part of it is that, kind of like the writing, I like it or I don't, without necessarily being able to subject it to any deep analysis of exactly why. Generally speaking, I like more realistic art without a superfluity of lines or “scratchi-”/ “sketchiness,” but a simple cartoony (“animation-”) style works for me as well in certain contexts. I have no understanding of how the collaboration between artist and writer works toward the story-telling aspects of what we end up seeing as the finished comics story, and therefore cannot meaningfully comment on that. I recognize that artistic style can go a long way toward establishing a certain mood for a story, and whether the mix ends up being to my liking or not. A "simple cartoony ('animation-') style" works really well with a more traditional Shazam or Marvel Family (and I share with Thom Zahler [link] a wish that he could be given a shot at the characters); it would not work with this story, however.  In any case, the long and short of it is that I generally like Gary Frank's art very much – it's what I mean by being more “realistic … without a superfluity of lines or 'scratchi-'/'sketchiness'” – and I consider this to be some of his best work ever. The one thing that has always bugged me about Frank's art is that characters' eyes are sometimes “wonky”; that doesn't seem to be the case here, or at least as noticeable. Overall, Frank's art perfectly complements the story Johns tells, and in this age of frequent substitute artists, one really pleasant aspect of this volume is the unity of vision from beginning to end.  That is refreshing! 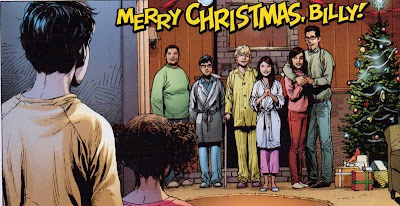 Like the most recent Wonder Woman volume [link], I actually read this collection a few weeks ago and have only just in the past few days had the luxury of sitting down and drafting a post.  But even as as I was doing so, I realized that publishing a review of Shazam! right now is indeed timely, given the setting of the story in the days leading up a climax taking place on Christmas Eve before Billy experiences his first Christmas morning with his new family.  This most magical time of the year, with its subtext of faith and family in the tale of a young man gaining a realization of both while becoming the new New DCU's Champion of the Magic, is a storytelling coup-de-grace on the part of Geoff Johns.  I know I blow hot and cold on his writing, but I must admit that when he hits it – and sometimes it takes me stepping back to realize that he has indeed hit it – he sends it out of the ball park!

Ultimately, this re-imagining shows great promise, and I'm surprised DC hasn't already announced an ongoing series. I'm inclined to the point of virtual metaphysical certitude to be there when it comes. ... I guess I will, however, just have to reconcile myself to DC's horrid new practice of calling The Hero Formerly Known As Captain Marvel … Shazam.