Got my month-end shipment of comics released in January a few days ago and decided this month I would read the few Dynamite titles I get first – mainly because I've been anticipating the addition of Lord of the Jungle to their little “family” of titles based on the works of Edgar Rice Burroughs. That addition has furthermore compelled me to make a slight change to the icon I'll use for this group. 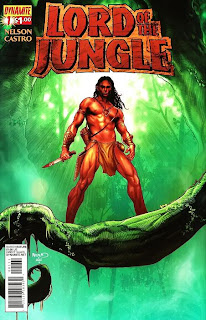 This is a solid first issue, basically a pretty standard and beautifully rendered retelling of the story in Tarzan of the Apes from the abandoning of John Clayton Lord Greystoke and pregnant Lady Alice on the coast of Africa by mutineers to the invasion of their little cabin by a tribe of great apes on their son's first birthday, their killing of Greystoke (Alice having passed away the previous night), and the exchange by a grieving she-ape of her own dead infant for the living baby she finds find there. It follows the book fairly closely except for the addition of one incident – a small group of Africans shows up looking for a new home, having been displaced by “Leopold's devils” [in-text note: “King Leopold II of Belgium, ruler and owner of the 'Congo Free State'”] and is promptly slaughtered and eaten by a group of savage ape-like men. “<WHAT ARE THESE THINGS?! … THEY'RE NOT APES, THEY'RE NOT MEN – WHAT ARE THEY?!>” The use of the name “Kulonga” for one of the Africans threw me for a loop, since that's the name of the warrior who killed Tarzan's ape-mother Kala years later in the novel, but this clearly was not the same character. Since at this point we'd not explicitly seen the great apes that would raise Tarzan yet in this story, only an ambiguous ape that attacked Greystoke and triggered Lady Alice's labor, I immediately wondered if this adaptation was going to follow Philip José Farmer's speculations in his faux-biography Tarzan Alive that the “great apes” or mangani in the Tarzan stories were really a dwindling remnant tribe of Australopithicene hominids or somesuch. That proved not to be the case – when they do appear a couple of pages later, they are clearly apes. I'm not sure what this insertion portends at this point, but I'm along for the ride. Actually, I do have a suspicion, but why would they introduce the Beast-Men of Opar this early?

A couple of other notes. First, in addition to the reference to “Leopold” being an addition elaborating on the historical context of Europeans' colonial exploitation of West Africa during the late 19th century, “Kikongo” is correctly given as the name of the local African language in the Belgian Congo. Second, nowhere in this book, either in the story, in the indicia, or anywhere, is the name “Tarzan” ever used. I'm not surprised it's not on the cover. I figure the legal situation for the cover is similar to that of the John Carter stories that Dynamite draws on for the Warlord of Mars series. If I understand it correctly, they or anyone are free to use names and stories and so forth from the early books in the series, the ones published pre-1923 I think, but the ones after that are still under copyright and owned by the estate of ERB. The trademarks on Tarzan, John Carter of Mars, and so forth, however, are owned by ERB, and can only be used in a marketing sense under licence. Its also my understanding that Disney currently holds both licences. It's quite complicated and confusing, but it explains why there can be two currently published franchises of Mars comics – Dynamite's and Marvel's – and why only Marvel's can use the trademarked titles while Dynamite must use more generic, euphemistic titles. On the other hand, if I understand it correctly, there would be no bar to Dynamite calling the character “Tarzan” within the pages of the comic. That might be coming. Or, it occurs to me, it could be like the movie Greystoke, which if I recall correctly never uses the name “Tarzan” either, in that case because it does depend on the apes having their own primitive, but human-like, language, which would come off pretty ridiculous in live action. There's no evidence that these great apes do – in this issue they utter only monosyllabic grunts, “Oo – oo – oo. Ah – ah – ah.” I'm curious to see where this is going. 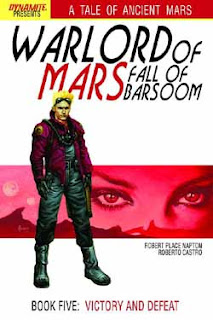 Well, we find out what the Jeddak of Horz's dastardly plan is – to hold off on activating the Atmosphere Factory until all non-Orovars on Barsoom are dead. The creepy cannibal mad scientist has devised a means of suspended animation that will allow the Jeddak and a select few to survive until all other life on Barsoom has gasped its last. Needless to say, his plan is thwarted by Tak Nan Lee and his new ally, the red savage woman Anouk, whom we find out is from the Helium tribe that now assumes overlordship of the Factory. Meanwhile, Van Tun Bor manages to save a good portion of the “non-select” people of Horz and other cities, but gives his life doing so. In an epilogue 100,000 years later, a warrior who doesn't really appear to be red (is it John Carter?) fights in the ruins of the city of Horz, in the shadow of a magnificent statue of Van Tun Bor and Tak Nan Lee: “My sword seems especially inspired today. … Perhaps from fighting in the shadow of such noble looking men. … I wonder who they were. … A pity no one's left to tell me.” There are, however, descendants of the white Orovars, looking on from the shadows as he mounts his flier and speeds away.

Overall I really enjoyed this series, although to tell the truth it really doesn't contribute anything essential to the legends of Barsoom. I really didn't expect it to. It was just a chance to tell a good story of the fall of a civilization and the birth of another. Well, and exploit the Mars franchise, of course. I guess the bit about the Jeddak's plan (kind of like how many James Bond movie villains'?) was a little lame, but oh well. 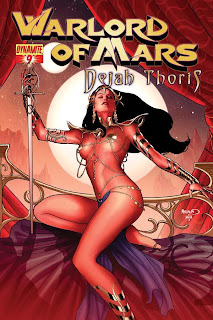 Dejah Thoris and Phondari trace back where the Malagor coin came from, discovering an underground world where the crews of the warring brothers who lost the Horde of Segotha have carried on the conflict to the present – we are reminded in a footnote that Barsoomians do not die unless they are killed. Just now one side finishes off the other in a particularly gruesome fashion. Dejah Thoris and Phondari discover the treasure, and what seems to be the prize beyond price – pearls unknown on Barsoom since the drying of the seas. Dejah Thoris, however, believes the prize beyond price is actually Segotha's beautiful daughter, taken from him by the moon pirates. It doesn't really matter right now, because just then Xen Brega bursts in with a hungry look in his eye.

Phondari once again deftly deflects Dejah Thoris' question regarding how the moon pirates can possibly survive the trip from Thuria to Barsoom.