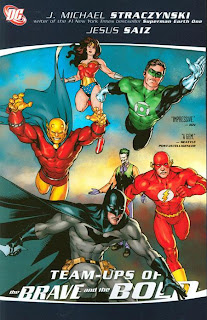 When the third incarnation of The Brave and the Bold began a few years ago to great fanfare, I greeted it with delight. A return to the classic heroes team-up format that prevailed in the original run back in the 1960s, with Mark Waid writing and George Perez drawing – what old-time fan like me could pass it up? And it was great, for the first couple of story arcs – successive issues paired Batman and Green Lantern, Green Lantern and Supergirl, Supergirl and Lobo, and so forth, in stories that led one into the next with an overarching story arc emerging. If I recall correctly, that remained the case for about a dozen issues, although midway through the second half-dozen issues Perez bowed out. I'm going by memory here, without pulling my trades of these out of the box where I have them stored. I was not buying them issue to issue – but at that time I was buying hardly anything issue to issue, being in my wait-for-trade phase. I eagerly looked forward to each of those trades – actually picking up the hardcovers – as they were released and thoroughly enjoyed them. But also, if I remember correctly, by the third collection the story was flagging a bit. Whatever, I distinctly recall not enjoying it as much. I passed on the fourth collection when it came out – not even getting the hardcover treatment. Waid had left after issue #18, the end of the third collection, and there was nothing intrinsically attractive to me about what came afterward.

Then it was announced that J. Michael Straczynski was coming aboard with issue #27, with a new sensibility to the stories. He would be allowed to range wherever he wanted in the wonderful breadth of DC's rich seven-decade history, writing a series of done-in-one issues. My reaction was basically meh. I've written elsewhere my ambivalent feelings about JMS. I don't feel like rehashing it here. It's ultimately irrelevant, except in that it did keep me from picking this up when it appeared as a hardcover. I did, however, take a look at it when I recently came upon it as a paperback, and liked what I saw enough to pick it up. The beautiful art mainly by Jesus Saiz had a lot to do with that. It lay on my “to-be-read” shelf for a while, but this month I finished my last-month's shipment of comics and got them blogged early enough to take a look at a pile of collections that I really need to get to as well, and I thought, why not.

JMS does an astounding job here. This is a perfect format for him. Taken in smaller doses as you've got here, with seven independent stories sharing a volume only because they are successive issues in a series, his tendency toward off-putting self-important preachiness can be taken a lot easier. It is there, but bearable. And he does very well in each case evoking the feel of whatever era of the DCU he is sampling.

He ranges very widely. Sometimes it's not at all easy to pin down exactly what era he's going for and the story becomes essentially timeless – iconic. In a bare 22 pages each develops a touching story in which the reader learns a little more about what makes these heroes tick, at least in JMS' vision. I'm not going to try abstracting the stories. They deserve to be read.

My one quibble with this volume is that it does not complete JMS' run, leaving out his last two issues. I would be really pissed if I hadn't already picked them up as they came out as issues. Why those?, you ask? Well, it's because they formed a two-parter bringing together, first, the Legion of Super-Heroes and the Doom Patrol, and second, the Legion of Substitute Heroes and the Inferior Five. If it's Legion, I typically get it. So I've read them. I couldn't begin to speculate why those issues were not included here, though, because the series ended with that and there won't be another JMS Brave and the Bold collection. I don't know where if ever they might be collected, which is a pity, because I remember thoroughly enjoying them, although I figured it was because they were Legion, as offbeat as they were. The Inferior Five?! But even a character I had no knowledge of beyond the name – Brother Power, the Geek – provides a wonderful team-up “partner” to Batman in one of the finer, most poignant stories in this volume. So it's regrettable that other readers will miss out on the two Legion issues.  Were DC to decide to offer an expanded hardcover second edition of this collection including those final two issues to make a “Complete Straczynski Brave and the Bold,” however, I tell them right now that I would buy it.

Here's a collage of the covers for the first six issues that are included in this volume: 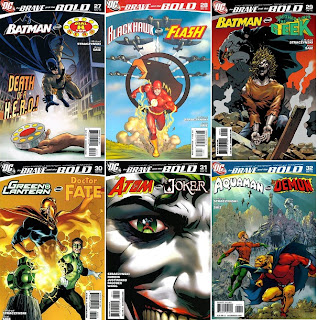 Besides making a "odd" number and giving an inconvenient shape to the collage, the cover to issue #33 is my favorite, so here it is separately: 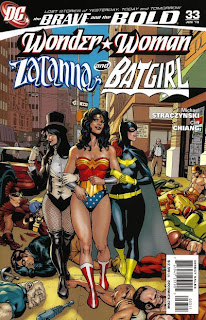 Cheers! … and Thanks for Reading!