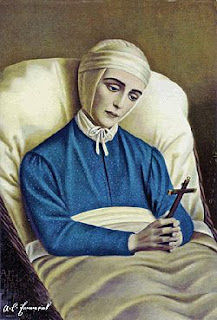 It's that time of year, the beginning of our forty days in the wilderness preparing for the Feast of the Resurrection. Every year I like to pick out some kind of religious or spiritual book for my bedtime reading during Lent. Last year, as I mentioned in a long-ago post, it was Fr. Paul Glynn's book about Takashi Nagai, A Song for Nagasaki. –

(Incidentally, despite a somewhat lackluster fund-raising campaign, production continues on All that Remains, a movie based upon Nagai's moving story. Please consider donating. Find out more about it here.)

– This year I have selected Light on Light: Illuminations of the Gospel of Jesus Christ from theMystical Visions of the Venerable Anne Catherine Emmerich by Hurd Baruch. Since 2004 acknowledged by the Church as Blessed, Anne Catherine Emmerich was an 18th-19th-c. German nun who purportedly experienced a series of visions mainly regarding the life and death of Our Lord. While they are not to be considered necessarily inspired – and in fact it is alleged that her amanuensis at the very least elaborated on the accounts she told him – the visions attributed to her are, if nothing else, moving meditations on the Mysteries of Salvation and Our Savior's Passion. They are perhaps best known today (in Catholic circles, at least) as one of the “sources” for Mel Gibson's movie a few years ago, The Passion of the Christ, which inspired me to read The Dolorous Passion of Our Lord Jesus Christ during Lent 2004. I acquired Baruch's book subsequent to that and have been meaning to read it. It is a summarization and commentary on the visions, built around extensive excerpts, showing how closely the account, whatever its origins, corresponds with what we know from the Gospels and other historical documentation.

I will no doubt write a fuller review of it when I have completed it in several weeks.