For various reasons I had banked up a half dozen of Dynamite's Warlord of Mars comics over the past few months. I caught up on reading them today. 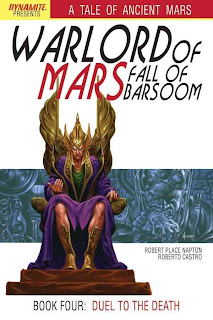 This issue begins with a short stroll down memory lane in the childhood of General Van Tun Bor that mainly serves to show how quickly Barsoom declined from a world where mighty ships plied vast seas to the current dessicated world fighting for its last gasp of breath. (“Quickly”? – debatable given how long Barsoomians live, but the impression is there.) In the “present,” a hundred thousand years before John Carter, the general realizes his Jeddak's duplicity, although not the extent – what exactly is up with that creepy little mad scientist who seems to be a cannibal? Van Tun Bor takes actions to save the peoples of Barsoom that the Jeddak declares to be treasonous – but then they are all attacked by Green hordes. Meanwhile, the hero scientist Tak Nan Lee succeeds in getting the Atmosphere Factory online, but also realizes the Jeddak's duplicity. He therefore takes steps to bequeath the knowledge of the Factory to the Red woman Anouk, whose red barbarian people he declares to be the heirs to the decadent and declining white, yellow, and black races of Barsoom.

I must say that this was the easiest, most straightforward narrative issue to follow yet – even with a gross production error that had the word balloons of one page duplicated on the facing page instead of that page's proper dialogue. Which is an editorial/production failure that does not detract from the fact that this story does evoke the proper feel, giving the impression that this could be the way Edgar Rice Burroughs' Mars that we know through the John Carter stories came to be. 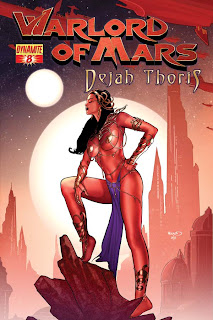 Dejah Thoris and Phondari, along with their crews, escape becoming the main course for Xen Brega, and Phondari takes Dejah Thoris to a city from which she and her companions can secure passage to Helium. Dejah Thoris instead demands that they continue their impromptu alliance, find the treasure that Phondari seeks, and split it to rebuild Helium. Phondari tells her the story of the Treasure Hoard of Segotha, which is cursed, and was thought lost until a coin was found in the tank of Helium's water station. The treasure allegedly contains something mysterious and wondrous. Dejah Thoris is sceptical.

Notice that in her tale, Phondari maintains the pretense that the Black Pirates are from Thuria, the larger moon of Barsoom. Otherwise will not be known by the Red Martians until Burroughs' The Gods of Mars. 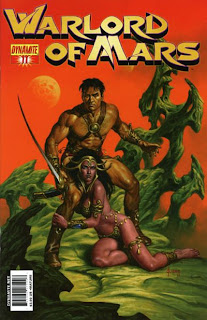 Carthoris and Tars Tarkas are shot down and captured by the Warhoons, but freed almost immediately by Kantos Kan and Helium forces who have been following them per Dejah Thoris' commands. In Helium, Dejah Thoris is investigating the mysterious circumstances of the discovery of the Atmosphere Factory Caretaker's amulet in John Carter's chambers. Carthoris and Tars Tarkas attain the Atmosphere Factory and ultimately find another amulet – it was allegedly unique – and a book. In the latter issue, Carthoris determines that the Therns are involved somehow – the duplicate amulet in John Carter's chambers had to have been provided by them – and races back to Helium in time to save Dejah Thoris. It turns out that a Thern, Bantor Thren discovered the forbidden truth about the Valley Dor and wanted to spare the peoples of Barsoom the horrors that await them in that “paradise” by destroying them all, so he killed the Caretaker and shut down the Atmosphere Factory. The Therns then tried to cover it all up by framing John Carter. Bantor Thren is dismissed as a madman, and his ravings ignored. And somehow Zat Arras (shouldn't it be “Arrras”?) avoids getting his comeuppance as he will (if Dynamite follows the source faithfully for Gods) be seemingly on good terms in Helium in future. 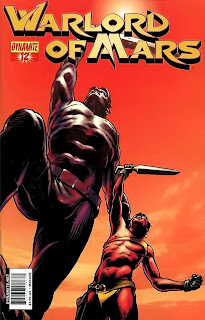 Clearly this is the flagship title of the Dynamite Mars franchise, which can be told in all kinds of little touches such as the fully designed Jetan board and pieces that appear, the text glossaries that are provided at the end, as well as the in-story laying out of a lot of the mythology of Issus that I bet will not necessarily be presented as exposition when we come to those parts of future issues (which is how Burroughs presented it). In issue #12 I like Sola's response when Dejah Thoris stands up to the assassin Bantor Thren, proclaiming, “We are not afraid!” – “Oh yes we are!” Sola shouts as she grabs Dejah Thoris' arm and turns to get away. Although I'm not sure that is in line with ERB's characterization of any noble character. I don't like how John Carter's inadvertent discovery of the telepathic key to the Atmosphere Factory is characterized as “stealing” even by Carthoris. Finally, I think there's something missing on the penultimate page of #12 – the dialogue just doesn't quite track. But that is a nice cover on #12, with Carthoris striking the same pose as the statue of his father, the Warlord of Mars. 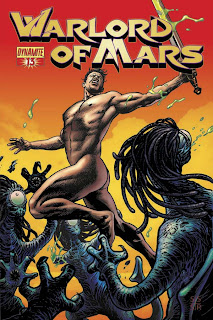 The text recap that customarily appears on the inside front cover is here the first two pages, and abridged from ERB's forward to The Gods of Mars. These are the first two installments of Dynamite's adaptation which will run for six or so issues.

John Carter finds himself back on Barsoom – which he doesn't initially recognize because the terrain is so unlike what he is used to. He is in the Valley Dor, the Barsoomian “heaven” that turns out to be a hell. In short order, he meets up with Tars Tarkas, they do battle against the mindless Plant Men, the White Apes, and White Men, and John Carter rescues a Red girl named Thuvia, who reveals the horrible, cannibalistic truth about the Therns, the high priests of Barsoomian religion. In #14, John Carter, Tars Tarkas, and Thuvia manage to escape by taking advantage of a Black Pirate raid on the Therns, but the flier they commandeer is too heavy and John Carter bails, sacrificing himself to save the others. But he leaps onto a pirate ship, where he slaughters most, captures one, and frees a Thern girl before falling prey to one of the oldest tricks in the book – engaging your subdued opponent in conversation which serves mainly as a distraction for the other Black Pirates to come up behind the Earthman. 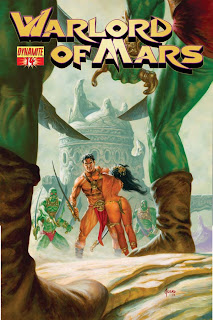 Are we perhaps meant to think that Tars Tarkas was inspired to take the trip on the River Iss by Bantor Thren's rantings? The presentation here drives home Burroughs' concept of a “heaven within a heaven” as Carter puts it, religions based on deception with a twist that the Therns who are deceiving the masses are themselves victims of deception by a smaller elite, the Higher Therns. We'll see this elaborated, of course. The scene where Thuvia kills her Thern master is expanded – and not in a good way, I think, because it betrays one of ERB's most fundamental traits of his virtuous heroines, that they would take their own lives before suffering dishonor. I just can't imagine Burroughs having written the lines, Thuvia: “He made me do such filthy things to satisfy his unnatural lusts, such things as I can never wash clean from my soul.” John Carter: “Thuvia, really. You had no choice. Whatever happened, there is no shame.” That's our sensibilities, not ERB's heroic fiction. By the way, as to Thuvia and her “banth-whispering,” we previously saw her and her pet banth 400 years earlier when she was a child in one of the early issues of Warlord of Mars: Dejah Thoris.

I'm pretty sure the term “slaughter” for a pride of banths is not an authentic ERB example of Barsoomian.