Person of Interest: What Birds of Prey Should Have Been 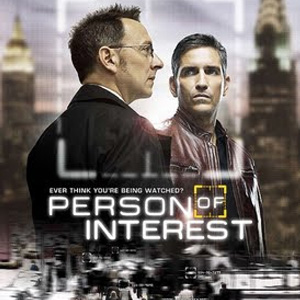 News flash: I watch too much TV. I mean that literally. Sometimes it's hard managing to keep up with everything I want to follow, everything I have regularly DVR'ing. I particularly think about this every fall when I look at what new shows are premiering. I'm consequently pretty resistant to taking on something beyond what I'm already watching. I figure in today's “age of availability” it's relatively easy to catch up with something if I drop into it later, anyway. Therefore, although it looked interesting and has a couple of actors I like, Jim Caviezel and Michael Emerson, I initially passed on CBS's Person of Interest. However, when shows started returning from Christmas hiatus, I happened to catch an episode of Person of Interest, and I was hooked.

A few days ago, I was talking with one of my colleagues – whom, after years of effort, I finally succeeded in luring into the comic-reading hobby – about the dearth of “superhero” shows on TV these days. A few years ago it looked like we might be witnessing a renaissance of such shows, but frankly I think the only halfway successful translations of the comic-book superhero idiom from print to live action TV in recent years has been the first season of Heroes as well as certain periods in the long run of Smallville. Don't say anything to me about the subsequent seasons of Heroes; I'd prefer to think they are nothing more than a bad dream. And Smallville was pretty spotty, although I enjoyed the early episodes and very much liked the last couple of years. My point right now is that there doesn't seem to be anything of the sort on TV these days. Anyway, I commented that as far as I can tell, the most “superheroish” thing currently on is Person of Interest, which he doesn't watch. And – a dangerous thing – that got me thinking as I was watching last night's episode.

I had already made the “superhero” connection, obviously. Besides the general mood of the show, with a heroic figure acting from hiding, going to great lengths to do good and save people, the fleeting image in the opening credits of Caviezel's character dressed in black with the black ski mask leaving only his eyes exposed definitely fostered such a mental leap – at least for me. Watching the show with that conversation fresh in my mind, however, it occurred to me what the closest comic-book analogue really is.

The basic gist of Person of Interest is that after 9/11, a mysterious billionaire computer genius, Emerson's character, designed The Machine for the US government. It is a massive program that collects and collates all kinds of surveillance data to predict and prevent another such catastrophe. All the government is interested in is preventing the Big Events, but The Machine predicts a host of other “minor” crimes such murders, bank robberies, etc. Rather than be overwhelmed with a mass of data it does not have the manpower to deal with anyway, each night the government dumps everything not dealing with acts of terrorism. The creator of The Machine secretly created a back door that sends him just the Social Security Numbers of persons involved in those “minor” crimes – no more than that so that if the government discovers the data tap they will still have no clue what it's about. But that leaves him knowing only that a “person of interest” will somehow be involved – not whether they are perpetrator, victim, or merely witness. It's enough, however, that he can take action to prevent whatever is about to happen. Recognizing that he does not have the skills or the physical ability to do so, however, he recruits someone who does and sends him into action. 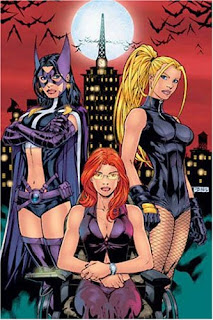 Boiling it down to its essence, therefore, we have a computer genius directing a small group of operatives – initially just Caviezel's character, but now there are a couple of others involved as well – in a series of missions. Which sounds just like Birds of Prey – except with guys. In its original conception, the comic book centered on Oracle, the former Batgirl Barbara Gordon, now wheelchair-bound as a result of a brutal attack by the Joker but putting her data technology skills to best use as the information broker of the DC Universe, recruiting and directing first Black Canary, then later other heroines (generally, although occasionally guys would get in on the action, too), in specific missions. The parallel even goes slightly further in that the computer genius in Person of Interest, Emerson's character, while not a paraplegic, is physically impaired to some degree. Of course, I do not mean even to hint that Person of Interest is in any way a reimagining of Birds of Prey. But the parallels, however slight, are there, and enough to get me thinking. 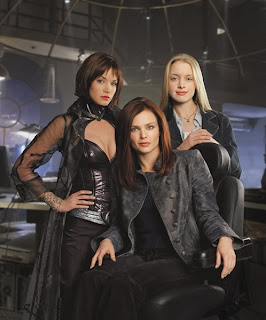 Birds of Prey was created as a comic during the mid-late 1990s, as a one-shot; by 1999 after a couple of successful mini-series it became an ongoing that lasted for a decade.* It rapidly gained in popularity back then, and when it was somewhere around issue #20 it was designated as Wizard magazine's book-of-the-month, which is what brought it to my attention. I was just getting back into comics big-time after a decade in graduate-school and engaged in the academic job search. It was so popular by then that the producers of Smallville developed it into a TV show – and made it a classic example of lightning not striking twice because they did not succeed in duplicating their success in translating the superhero idiom to live action TV. Although it debuted to respectable numbers in the fall of 2002, Birds of Prey was a great disappointment that dropped like a rock in the ratings and lasted only half a season.

But the Birds of Prey TV series did not have to be a failure. I think that Person of Interest – which debuted to high ratings, was quickly picked up for a full season, and seems to have even expanded its audience somewhat such that I figure renewal for a second season is a shoe-in, especially since it was recently picked as “Favorite New TV Drama” by the People's Choice Awards – demonstrates that. And Birds of Prey had the further advantage of beautiful women in tight leather. In its original comic book conception, which centered on two “superheroines” who had no “superhuman” abilities – Black Canary had lost her “Canary cry” sonic scream long before (she would eventually get it back, but I don't think that was until after the period when the TV series was developed) and was limited to her martial arts skills – Birds of Prey would seem to me to have been tailor made for successful development into a live-action TV drama. I think that the result may well have been much like Person of Interest.

Among the areas where TV's Birds of Prey went wrong, I believe, was in its shifting focus from Black Canary as the operative to Huntress as part of an overemphasis on connections to the Batman universe, particularly the more fantastic elements therein – such as making Huntress, the daughter of Batman and Catwoman, an ill-defined “metahuman.” I'm not saying that retaining the Bat-connection itself was wrong-headed, just the way they went about it. Frankly, what point would there be in doing a show called Birds of Prey with those primary characters – especially Barbara Gordon in her Oracle identity – without those connections? But even Batman, I believe, works better in live-action when it is firmly grounded in reality, something that Christopher Nolan gets. (And his brother Jonathan is the creator of Person of Interest, something I didn't realize until I was working on this blog post.)

Of course, I mentioned above that Birds of Prey has the advantage of tightly-clad beautiful women – engaged in fantastic action sequences. And the Batman connection, done right, could have also drawn on a ready audience of fans beyond comic-book readership. There are a lot more fans of Batman than there are people reading his books. Person of Interest has its own hook, of course, the intriguing mystery each week surrounding exactly what The Machine is indicating when it sends the Social Security Number – and nothing more – of the current “person of interest” to Emerson's character at the beginning of each episode. There are also the mysterious backgrounds of both his and Caviezel's characters as well as the threat of what will happen if the existence of the The Machine is revealed. There's also the issue of post-9/11 surveillance and what exactly is done with the information the government collects.  These things make Person of Interest, if not unique (I've seen it compared to Minority Report, which I've not seen) at least stand apart from other action-mystery dramas. And in the hands of Jonathan Nolan and J. J. Abrams of Lost fame I suspect it's going to maintain a high level of intrigue. 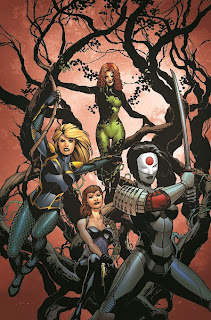 * Birds of Prey is indeed one of the titles in the New 52, but now it is a group of female heroes, still including Black Canary but without Oracle, who does not exist in the post-Flashpoint DCnU since Barbara Gordon has regained the use of her legs and taken back to the rooftops in her Batgirl guise. While I am enjoying the title on its own merits, and in Starling it features my favorite totally new DC character created in the Relaunch, it's not the same.  The original Birds of Prey was very much about Oracle.