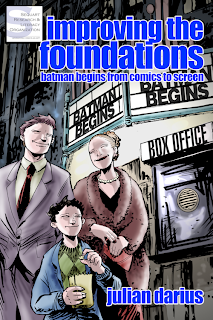 By Julian Darius (available here or through Amazon).

Sequart* Research and LiteracyOrganization is a website and publishing entity devoted, in its own words, to “Advancing Comics As Art” – taking them seriously as a legitimate narrative medium. It was formed by Julian Darius back in the 1990s, while he was in college; he has since gone on to earn a Ph.D. in English. I bought their collection of essays, Teenagersfrom the Future: Essays on the Legion of Super-Heroes a couple of years ago, and enjoyed it. When a 99-cent Kindle edition of the present book, by Darius himself, became available a few weeks ago, I jumped on it and have been reading it a bit at a time.

Darius provides much more than just a “Making of” the movie type of book. It is filled with a wealth of information tracing the various versions of the Batman origin story as they developed over the years from the bare two-page sketch that appeared several issues into Batman's original run in Detective Comics 'way back in 1939. I learned a lot about how elements of the story that we take for granted today – such as that both Thomas and Martha Wayne were shot that tragic night before the eyes of their horrified son – have not always remained constant. Specifically, some versions have had it that Mrs. Wayne died of heart failure upon seeing her husband murdered. Likewise, elements of the story that follows – that young Bruce was then cared for by the family's faithful manservant Alfred, for one – were actually very late additions. Darius provides a thorough discussion, with judiciously chosen illustrative panels and pages from the original comics, to trace how the story as we know it is really a synthesis of elements that have accrued through times, contributed by many different creators, each having their own emphasis and significance. And that's pretty much before he starts discussing the movie!

Among other things to be found in Improving the Foundations is a history of Batman on film, the strengths and weaknesses of earlier incarnations, the fitful stop-and-go nature of getting the most recent franchise by Christopher Nolan off the ground given the bad taste that was left by the latter two films in the 1990s series, and how, although it did not initially perform up to Warner Brothers' hopes, Batman Begins proved to have incredible staying power, benefitting from extremely favorable word-of-mouth, and laid the foundation for the phenomenon that would be its sequel, The Dark Knight.

The core is a scene by scene breakdown of the movie, comparing screenplay with finished product, and analysing both in light of seven decades of character and story development. All in all it is a greatly informative resource that any fan of Batman specifically or comics in general, and the usually disappointing films that are made from them, will benefit from reading. As to the former, I believe that like myself, there is something to be learned with every turn of the page/swipe of the screen. In a broader perspective, I did come away with a better understanding of what goes into developing a mythic narrative that appears in many variant and sometimes contradictory forms into a presentation suitable for a different medium and a new audience.

I can see myself revisiting this book from time to time, both as I rewatch Batman Begins and as I occasionally read some of those old Batman stories that provided the foundations that Christopher Nolan “improved upon.”

Cheers, and thanks for reading!
* * *
* Sequart:  "Sequential Art," coined by Darius as an attempt to provide a more accurate term to describe the pictorial narrative form commonly referred to as "comics."  The term "graphic novel" is born of a similar perception that, in the main, the stories depicted are very seldom "comical."
Posted by Kent G. Hare at 15:35